Reporting on its financial results for the fourth fiscal quarter of 2021, Apple has announced profits of $20.6 billion ($1.24 per diluted share) on revenues of $83.4 billion, slightly under analyst expectations, where the consensus estimates were for $84.9 billion. Apple CEO Tim Cook attributed the lower-than-expected revenues to supply constraints, which he said may have reduced Apple’s revenue total by as much as $6 billion. Nonetheless, Apple’s revenues were up 28.9% compared to the year-ago quarter, with profits for the quarter up by 62.6% (see Apple’s Q4 2020 Marks Record Revenues but Lower Profits as Mac and iPad Boom, 29 October 2020). 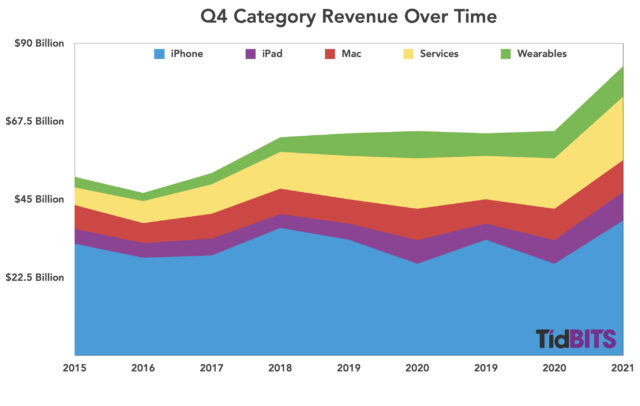 In fact, “supply constraints” was a continuing theme in Apple’s quarterly conference call with financial analysts. Cook described two kinds of constraints: chip shortages, which are a global problem, and pandemic-related manufacturing disruptions in Southeast Asia, which was hit particularly hard by the Delta variant of COVID-19—see Josh’s analysis of recent supply chain woes.

Cook said that while COVID-related constraints are easing, he expected the chip shortage to continue. When paired with increased demand for Apple products, the chip shortage may result in another $6 billion shortfall in the company’s first fiscal quarter of the year, traditionally Apple’s most lucrative. In other words, don’t expect your Apple cleaning cloth to ship any time soon.

As far as Apple’s revenue mix goes, the iPhone still reigns supreme, but it now represents less than half of Apple’s quarterly income, with Services in a strong second place. (Which category does the cloth fit under? We’re betting on “Wearables, Home, and Accessories.”) 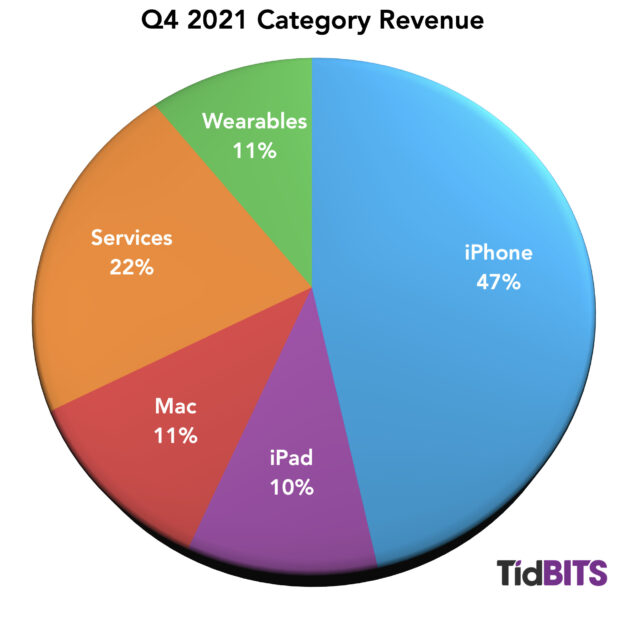 After experiencing a big drop in Q4 2020, the iPhone recovered with an eye-popping 47% year-over-year increase in revenue, bringing in $38.9 billion versus $26.4 billion in the year-ago quarter. However, the comparison between this quarter’s iPhone revenues and those in the same quarter last year may be misleading, since last year’s iPhones did not ship until after the end of Q4 2020 (see “Apple Q3 2020 Breaks Records While the World Burns, Next iPhone to Be Fashionably Late,” 30 July 2020). Nonetheless, iPhone demand itself remains strong, and Cook said that, combined with supply chain problems, has caused channel inventory to be well below the company’s target figures. Meaning: Expect shortages and delays. 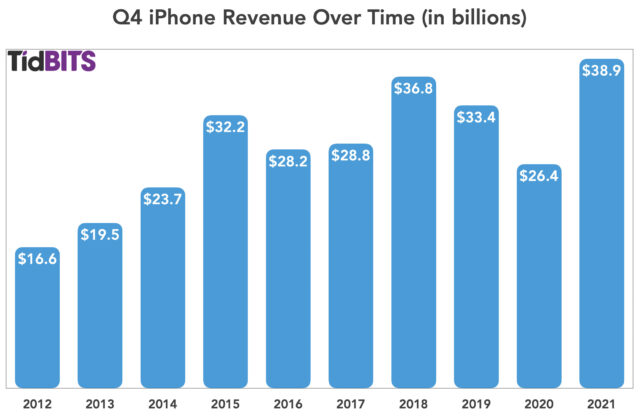 Unlike many of us, the iPad had a strong 2020, and that has continued into 2021, with a 21.4% revenue increase over the year-ago quarter. The iPad raked in $8.3 billion this quarter, up from $6.8 billion in the same quarter last year. Unsurprisingly, Apple expects continuing supply chain constraints to reduce iPad revenues for Q1 2022. 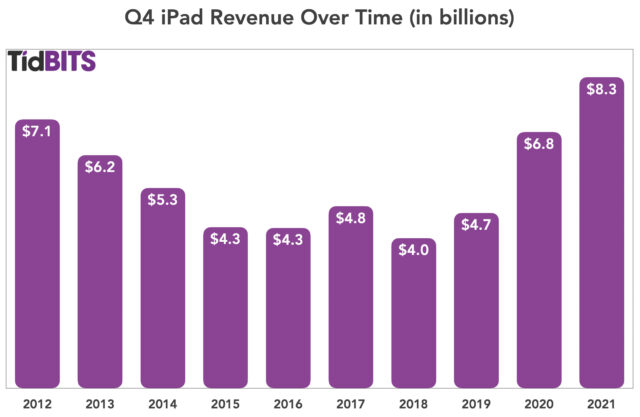 The Mac boomed in 2020, but its growth is back to modest gains in Q4. It saw a 1.6% increase in revenue since the year-ago quarter, bringing in $9.2 billion vs. $9.0 billion in Q4 2020. Nonetheless, this set an all-time Mac revenue record for the quarter; in fact, each of the last five quarters has set records for Mac revenues. This quarter’s increase was buoyed by strong sales of new consumer MacBooks and iMacs, both powered by Apple silicon. The most recent releases of MacBook Pro models, however, began after the end of the fiscal quarter and did not factor into the results. 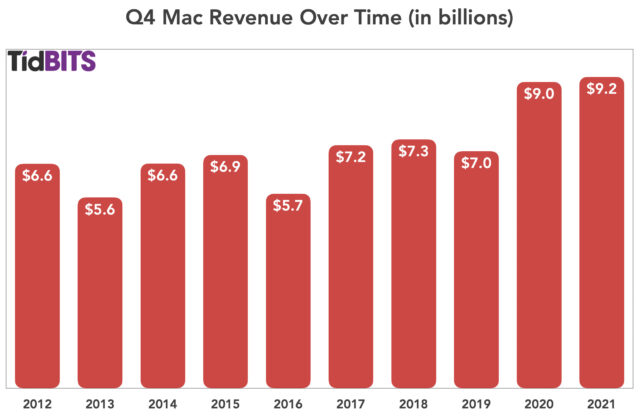 Services continue to boom, climbing 25.6% year-over-year, from $14.5 billion in Q4 2020 to $18.3 billion in Q4 2021. Services revenue has tripled since it became its own category in 2015. And it’s the one aspect of Apple’s business not heavily tied to the supply chain. Cook was especially ebullient about the success of Apple TV+ offerings, citing the popularity (and recent Emmy award wins) of shows like Ted Lasso and The Morning Show. More important, however, in terms of revenue, are the subscriber numbers for Apple services, which Cook pegged at 745 million. These services include not only Apple TV+ but the company’s Apple Fitness+ offerings, Apple Music business, and Apple Arcade service.

One possible fly in Apple’s services ointment is the attempts by government legislators and regulators to reduce Apple’s tight control over the App Store. Cook several times made clear that Apple is committed to protecting the privacy and security of its software customers and repeated a phrase he has made several times recently: “We believe privacy is a basic human right.” 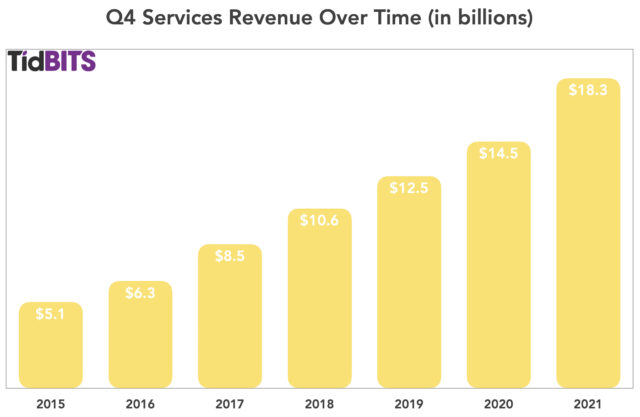 The Wearables category continues to be a strong performer for Apple, up 11.5% from the year-ago quarter, bringing in $8.8 billion, up from $7.9 billion. Apple said little about wearables during the quarterly investor call, but between the Apple Watch Series 7 and the third-generation AirPods, we expect this business segment to do well in Q1 2022. 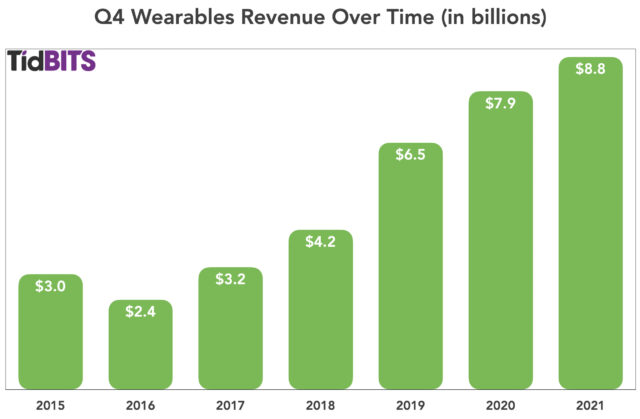 Apple continues to smash records in global regions, recording increased revenues during the quarter in every geographic segment of its business. The chart speaks for itself. 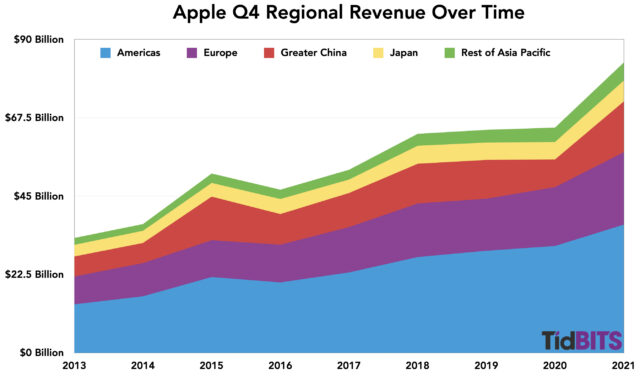 To sum it up: Apple remains an antifragile company (see “Apple Is Now an Antifragile Company,” 30 July 2021). Despite COVID, an uncertain global economy, increased governmental oversight, and an overstressed supply chain, Apple continues to grow.