For over two decades, “APPLE IS DOOMED” was a common refrain in Internet discussions. Originally, it was meant in a literal sense, but once Apple was well on the road to becoming the tech titan it is today, the saying was parroted back, soaked in irony, as a rebuff to naysayers. But lurking behind those rebuffs was the very real concern that Apple was too dependent on the iPhone and that someday the world would move on, causing Apple’s business to come crashing down.

The cascading crises of 2020—with retail store closures, a shuttered Apple headquarters, and broken supply chains—were the ultimate test of Tim Cook’s leadership. In short, Apple not only survived, it’s once again shattering records (see “Apple’s Q3 2021: Still Making Money Hand Over Fist,” 27 July 2021). Mac sales are stronger than ever and have been setting records for the past four quarters. After a nearly decade-long slump, iPad sales are higher than they’ve ever been apart from their 2012 peak. The iPhone 12 continues to be a smash hit near the end of its product cycle. Services and Wearables both continue stratospheric growth.

Tim Cook has transformed Apple into a truly antifragile company that actually improves under adversity.

To understand antifragility, we need to delve into a bit of philosophy, specifically that of Nicholas Nassim Taleb, author of the Incerto series, the most notable entries being The Black Swan and Antifragile. Taleb’s central thesis is that bad things happen unexpectedly—the so-called “black swan events”—and he proposes that society needs to build systems that can survive or even grow stronger after unexpected setbacks.

First, let’s examine the ways in which Apple is robust. Many questioned, and still question, why Steve Jobs, ever the artist, chose a bean-counting supply chain wizard like Tim Cook to lead Apple. But the events of the past year have proven once and for all that Jobs knew what he was doing.

Have you tried to buy a PlayStation 5 or an Xbox Series X? Good luck, they’re still hard to get. No one can produce enough chips. The same goes for automobiles. Automakers have had to choose between producing cars with fewer features or not making them at all.

Apple hasn’t had this problem. You can walk into an Apple store right now and pick up an iPhone 12 or an M1-based Mac. Apple CFO Luca Maestri had warned in the company’s Q2 earnings call that Apple was expecting supply chain constraints, but in the Q3 call, he briefly mentioned that Apple had worked around them. He warned of more severe constraints in Q4, but knowing Apple’s habit of underpromising and overdelivering, I’m betting that it won’t turn out to be a major problem. Even if I’m wrong, I guarantee that Apple will be in a better situation than other silicon-dependent manufacturers.

Apple can do this because it spends billions well in advance to secure the parts it needs—precisely what the auto industry didn’t do. Apple reported that it plans to spend over $38 billion in manufacturing purchase obligations this quarter, up 26% from last quarter. Analyst Ben Bajarin said it’s due to Apple locking in its chip supply. Other manufacturers have been caught with their pants down while Apple guarantees its chip supply.

Locking in chip supply. Apple knows, what many of us have heard. Chip constraints are not easing any time soon. Apple's forward commitments, in bulk, are why they continue to get supplier preference. https://t.co/fduKdp4zDM

Another bold and prescient move was Apple’s decision to dump Intel in favor of its own ARM-based processors. With the switch to Apple silicon well underway, Apple is no longer at Intel’s mercy and doesn’t have to compete with other PC manufacturers for CPUs. Apple can take its designs directly to foundries like TSMC and buy up manufacturing capacity in advance. It helps that the M1 chip has already proven to be superior to Intel’s offerings in almost every way, driving record Mac sales.

As a result of this supply chain mastery, Apple can chart its own destiny. But the company also has an often-overlooked secret weapon: the nearly $200 billion in cash it keeps on hand. Financial “experts” have often derided or even loudly protested Apple’s cash holdings, insisting that money could be invested elsewhere or given to shareholders, but when Apple needs $38 billion to secure its product pipeline, it has the money ready to slap on the table. (Taleb, not a fan of experts, says of them in The Black Swan: “The problem with experts is that they do not know what they do not know.”)

Finally, Apple has a global reach unmatched by most competitors, most notably in China. Regardless of how you feel about Apple sellings its wares there, China’s early recovery from COVID-19 helped bolster Apple’s last few quarters. At the same time, when sales fell in China (see “Apple Warns of Lower Revenues, Blaming Slower Sales in China,” 3 January 2019), Apple’s strength in other regions buffered the hit.

Apple is robust in that it tightly controls its supply chain, stockpiles the cash to do so, and has a global reach, but let’s look at how Apple’s diversified product line makes the company antifragile.

Most quarterly Apple investor calls are pretty dull. The only time they’re exciting—albeit for all the wrong reasons—is when Apple has a bad quarter. But this week’s Q3 2021 call was fascinating because so much of the discussion surrounded Apple’s COVID-related challenges and how the company was responding to them.

The key exchange was between Morgan Stanley’s Katy Huberty and Apple CFO Luca Maestri. Huberty asked if Apple was helped or hurt by the pandemic. (Thanks to Jason Snell of Six Colors for transcribing the call.)

Maestri’s responses and other comments during the call illustrated Apple’s antifragility. Most of Apple’s 500-plus retail stores, along with many of its partners’ stores, were shut down for much of 2020. Maestri said sales of the iPhone and Apple Watch were hurt by the store closures because those are more complex transactions in which customers need assistance. But more people working and learning from home created a boom in iPad and Mac sales. (We first saw this pattern emerge in “Apple’s Q4 2020 Marks Record Revenues but Lower Profits as Mac and iPad Boom,” 29 October 2020.) In other words, while some of Apple’s product lines may have been hurt by the pandemic, others actually benefited.

Store closures also hurt the AppleCare part of the Services business, and a slowdown in advertising hampered Services revenue. But those downturns were more than offset by a boom in the entertainment aspects of the Services segment (Apple Music, Apple TV+, etc.) due to lockdowns and restricted entertainment options. Again, some services were down, but others were way, way up.

Apple has not just a diverse portfolio, but a diverse portfolio of strong products backed by both physical and online distribution options that keep revenues balanced even in the toughest times. A brick-and-mortar retailer like Dollar General would be devastated by store closures, but for Apple, the slack was easily taken up by its online store. Netflix lives or dies by its subscriber figures, but a dip in extended warranty subscriptions would be mitigated by a music service, original video content, fitness service, and even a credit card. HP is nothing without PC and printer sales, but the Mac could coast along if necessary thanks to Apple’s other product offerings.

Even the iPhone, the linchpin of Apple’s renaissance, doesn’t make or break the company, as shown in the tumultuous Q2 2020, when the Services and Wearables category pushed Apple to very slight growth despite declines in every other category (see “Apple’s Q2 2020 Was a “Very Different Quarter” Than Expected,” 30 April 2020). The company can monetize the millions of existing iPhones with services and accessories, and then bolster its financial results with Mac and iPad sales. 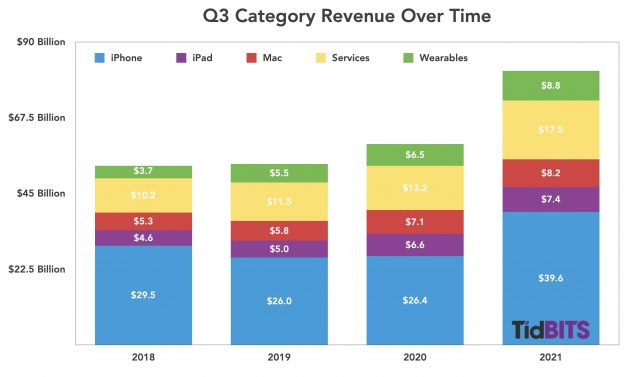 Apple is robust because of securing its supply chain, and it’s antifragile thanks to a diverse mix of strong products. Does anything threaten mighty Apple? A few concerns:

That said, Apple’s performance in 2020 and 2021 shows why I’m not worried about Apple’s future. As far as I’m concerned, APPLE IS DOOMED jokes are dead, even ironic ones. Apple may not always do what we want, but it does what it needs to survive—and thrive—even in the worst of times.

Comments About Apple Is Now an Antifragile Company