That was quick. HomePod Software 15.1, released just a week ago (see “Apple Releases macOS 12 Monterey with iOS 15.1, iPadOS 15.1, watchOS 8.1, tvOS 15.1, and HomePod Software 15.1,” 25 October 2021), caused problems for Podcasts. TidBITS reader Rick Kitchen posted in TidBITS Talk, asking about the “Sorry, there was a problem with Apple Podcasts” error message. My initial suggestion of verifying that Podcasts worked on his iPhone wasn’t helpful (that had solved a podcast-related problem for some relatives), but no wonder—the problem was just a bug. 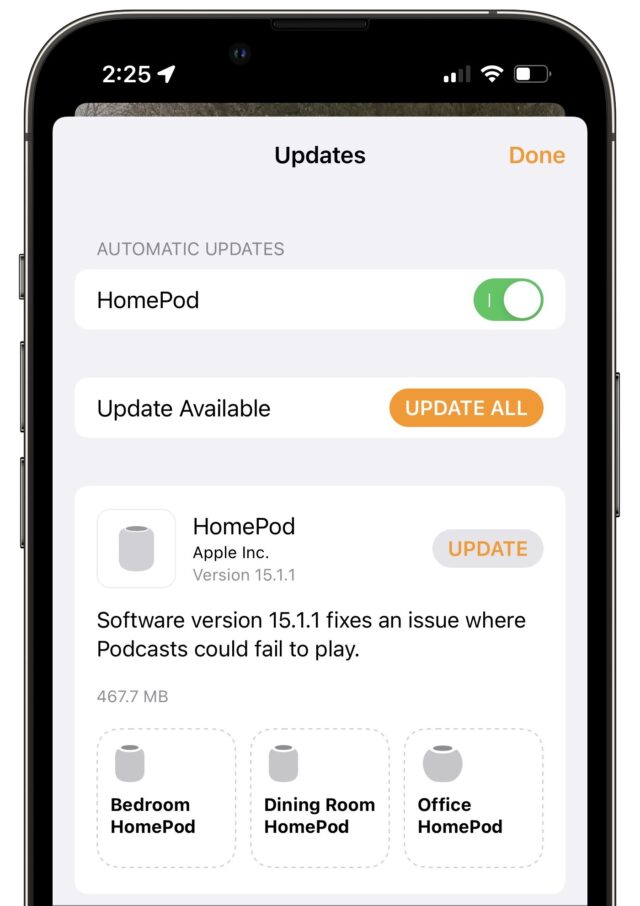 Apple has now released HomePod Software 15.1.1 to fix that specific problem. The 467.7 MB update should install on its own soon enough, but you can force it to install right away by opening the Home app, tapping the Update Available button at the top of the screen, and then tapping Update. (I presume that mine reads Update All only because I have multiple HomePods.) If the Update Available button doesn’t appear, touch and hold a HomePod tile, tap the gear icon to display the settings, and tap Update near the top of the screen.

One final note. The only changes Apple describes in HomePod Software 15.1 are support for spatial audio with Dolby Atmos and lossless audio in Apple Music. You’d be excused for having trouble finding the associated settings to play such formats on your HomePod, especially because Apple buried them on the iPhone and iPad and, as far as I can tell, omitted them entirely from the Home app on the Mac.

In the Home app, tap the house icon at the top left of the screen and then Home Settings > Your Name > Apple Music to get to the switches for Lossless Audio and Dolby Atmos. Beware that lossless audio will consume significantly more bandwidth, so it may not be worth turning on if you can’t hear much difference in the audio quality.