Last year, I added more devices to our HomeKit setup with the Meross Smart WiFi Plug Mini outlets (as cheap as $10 each at Amazon, with a $5-off coupon if you click a checkbox), a Velux gateway for controlling some shades, and some Flic 2 buttons (see “HomeKit for the Holidays (And Home Troubleshooting Tips),” 15 January 2021). Since then, I’ve spent quite a few weekend hours replacing 16 light switches for our in-ceiling and track lighting with either Meross’s Smart WiFi Single Pole Switches (about $21 at Amazon, with a $3-off coupon) or Smart WiFi 3 Way Switches (about $25 at Amazon, with a $5-off coupon). When buying anything from Meross, be sure to get the HomeKit versions since the company also has versions that aren’t HomeKit-compatible.

I won’t pretend that this was easy or for the faint of heart. Having grown up on a farm and watched my parents build their house, I’m pretty comfortable with tools and wiring and whatnot, but I’ve only dabbled with electrical work. Figuring out exactly how the switches were wired required experimentation in our somewhat interpretive circuit breaker box, a lot of staring at the cables in the switch boxes, reading Josh Centers’s Take Control of Apple Home Automation, and consulting Internet explanations that never looked like my wires. And while it’s easy to remove a switch, my old switches were smaller and had fewer wires than the Meross switches, so I always had to figure out how to integrate the extra ground and neutral wires into the thick bundles of copper in the switch box. I got good at cutting out crimp sleeves, stripping insulation, and putting it all back together with electrical wire nuts. The hardest part was getting everything to fit back into the box at the end. 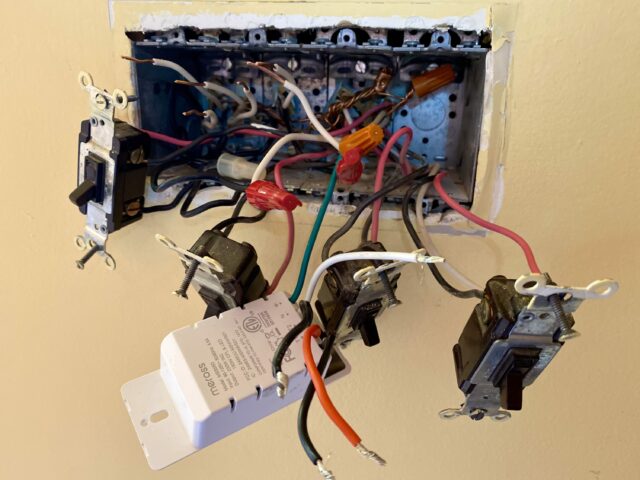 But oh, was it worth it! We now have five HomeKit “rooms” of lights that we can control individually, together, and via scenes and automations. Because I put the effort into the switches rather than the smart light bulbs, it’s still easy to control all the lights from physical switches, ensuring that anyone who visits won’t be confused or find themselves incapable of controlling the lights. We direct most of our commands to a HomePod—we have original HomePods in the bedroom and dining room, and Tonya has a HomePod mini in her office—but of course, an Apple Watch or iPhone is also always ready to help.

For us, controlling lights via Siri has become the standard. It’s not always successful—at times, talking to Siri is like giving directions to a toddler. Siri sometimes interprets “Turn on the wall lights” as “Turn on all lights,” which is a bit shocking, as every light in the house goes on. It took us a few tries to come up with unique names that made sense to us and didn’t confuse Siri. Plus, we have to be careful about how we speak: “It’s time to eat dinner” generates restaurant recommendations from the HomePod, whereas “It’s time for dinner” adjusts the lighting so we can eat.

Let me explain what we’ve done. If you’ve been on the fence about home automation—I was for many years despite Josh’s urging—perhaps my experiences will convince you to give it a try.

We have six HomeKit scenes—collections of light and outlet states that we enable manually throughout the day, usually prefixed in a Siri command with “It’s time to…” so it feels conversational. In chronological order: 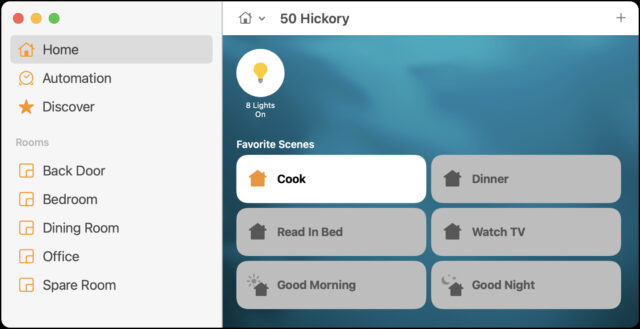 We don’t rely heavily on HomeKit automations, collections of light and outlet states that trigger based on time or some other variable. Instead, we usually activate accessories and scenes manually with voice commands. In part, that’s because we spend most of our time at home, so we seldom leave and return, much less do so on a schedule. Plus, the one problem we’ve never resolved is that we can’t add Tonya’s iCloud account to the “home,” which prevents us from creating automations that trigger when both of us leave the house, for instance. (Apple’s best guess, after much troubleshooting last year, was that she has too many devices associated with her iCloud account.) We do use three automations: 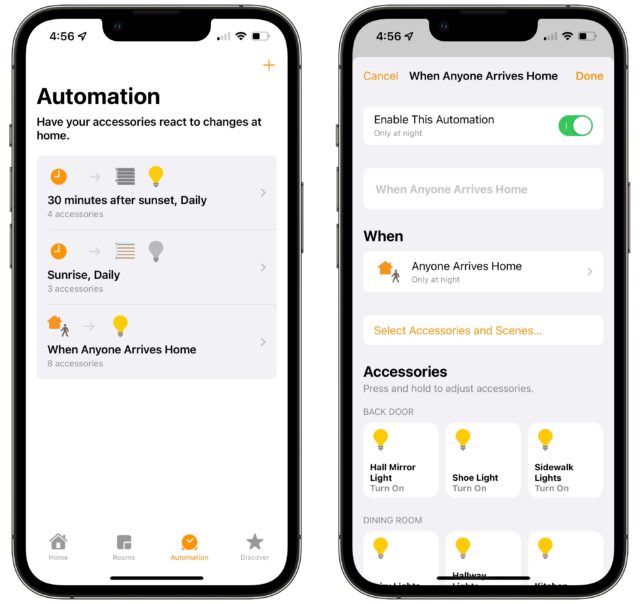 Here in upstate New York, it gets pretty cold in the winter, and since we heat our house with geothermal, which can’t raise the temperature of the old baseboard radiators upstairs as high as the previous propane-fired boiler could, our bedroom can be on the cool side. Flannel sheets and a down quilt make sleeping comfortable, but getting into a cold bed is never fun, and Tonya particularly dislikes it. For her birthday, I decided to solve that problem with an electric mattress pad and a Meross Smart Wi-Fi Plug Mini outlet.

I did some research and found that many electric mattress pads aren’t compatible with smart outlets. It seems that they don’t activate at all or remember their temperature settings when they’re turned on by supplying power—as opposed to pressing their built-in power switch. The electric mattress pad I grew up with in the 1980s had a physical switch and a dial for temperature, but such simple controllers aren’t generally available. The best option I found was the Beautyrest Black Dual Zone Heated Mattress Pad, which advertises itself as compatible with smart outlets. Unfortunately, it’s hard to find—the Amazon link above doesn’t have any available to order now, and while I was able to buy it at Costco back in September, it’s entirely unavailable there now.

The Beautyrest Black Dual Zone Heated Mattress Pad works as advertised, providing a mode where it remembers its temperature settings whenever a smart outlet turns it on. (The only downside is the hard connectors that your feet can feel at the bottom of the bed.) As I mentioned, our Good Night scene turns it on automatically, but Tonya gleefully tells Siri to “Turn on the mattress” most nights when we finish watching TV. That adds a few more minutes of heating time and makes sure the sheets are toasty warm. Talk about a birthday present that keeps on giving!

We occasionally come across new ways of using Siri, and since Apple doesn’t deign to share all the phrases that Siri knows, I figured this is as good a way to spread the word as any.

How Do You Reset a Switch?

A few months ago, we had a power outage. Nothing particularly out of the ordinary, but after the power came back on, three of the Meross smart switches I had installed were seemingly dead, ignoring both Siri commands and manual presses. I was quite worried that the power outage had been accompanied by a surge that had damaged them, and I wasn’t looking forward to having to fuss with the wiring again.

Acting on another hunch, I went to my circuit breaker box and toggled the power to those circuits off and back on. Happily, that restored the dead switches to normal functioning. Keep that in mind if you ever run into a similar situation.

The Real Benefit of Home Automation

For many years, I was something of a home automation skeptic. It just didn’t seem like that much of a win to schedule lights turning on and off. Even after an iPhone became my constant companion, I couldn’t see how pulling it out of my pocket was easier than just flipping a light switch. The real key to making home automation work has been the HomePod. Being able to issue a command wherever I am in the house and as I’m walking from room to room has made all the difference—it really is easier than walking over to a light switch and flipping it.

There’s an important point to be made here. Home automation isn’t mostly about making tasks physically easier. The goal is not to end up like the people in the animated film WALL-E, who have, as Wikipedia notes, “degenerated into corpulence due to laziness and microgravity, their every whim catered to by machinery.” (Fun fact from that article: the AUTO artificial intelligence in WALL-E was voiced by MacInTalk.) We’re happy to exercise in significant ways throughout the day, and turning off lights before sitting down to dinner is a meaningless addition.

The real win of home automation is eliminating cognitive distractions. When it’s time for dinner, it’s time to eat—the food is hot, one of us is likely already sitting down, and it’s disruptive if the other person has to traipse around the house, shutting off lights. Similarly, when we want to watch TV, getting all the lights set right wastes time and distracts from the focus of the activity. These might be self-imposed distractions—we could just leave all the lights on unnecessarily—but they’re no less annoying than unwanted notifications or spam phone calls. It’s quite similar to using Keyboard Maestro to automate a repetitive task on your Mac to save time and mental energy.

Finally, I can’t say if this will be true for you, but we’re actively gleeful when we control our house with voice commands. It truly is magic, in the sense of Arthur C. Clarke’s Third Law: “Any sufficiently advanced technology is indistinguishable from magic.” It’s also another example of living in the future, just like using Apple Pay on the Apple Watch. Not just any future, but a good one, like that of the original Star Trek, which was the first instance I remember of people talking to computers. Perhaps turning lights on and off with our voices and having things happen automatically will eventually become commonplace, but we haven’t gotten the slightest bit jaded so far.

HomeKit isn’t for everyone. It’s still fussy to install and configure the necessary hardware, and you have to be willing to laugh at Siri’s occasional lapses rather than getting offended that voice recognition isn’t perfect. And we’re still early in the home automation game. I imagine we’ll eventually have technology with room-level awareness of our locations, for instance, which will enable our houses to configure themselves for us, rather than us having to manage everything manually.

Now, if you’ll excuse me, I need to set up another Meross smart outlet so I can include the Christmas tree lights in our various scenes and automations rather than having to reach behind the particularly prickly tree we got this year to turn them on and off multiple times per day.

Comments About Reflections on a Year with HomeKit