The rumor mill expected Apple to unveil a fifth-generation iPad Air at its Peek Performance event, but most people thought it would be a modest update with the same A15 Bionic processor found in recent iPhone models and the iPad mini.

Apple needs good arguments to entice budget-minded customers into choosing the 10.9-inch iPad Air over more affordable models. In 2020, it was a physical revamp mimicking the industrial design of iPad Pro models, along with an A14 Bionic chip then exclusive to the iPad Air (see “Apple Redesigns iPad Air, Updates Base-Model iPad,” 15 September 2020).

This year’s iPad Air looks the same as its predecessor and retains its compatibility with the second-generation Apple Pencil. But with its internals—notably that M1 chip—Apple has a persuasive pitch. For the same price as the preceding iPad Air, customers get performance comparable to an iPad Pro, not to mention the MacBook Air, 13-inch MacBook Pro, Mac mini, and 24-inch iMac, all of which rely on M1 processors (not that iPadOS is a match for macOS at tapping all that power).

Compared to the previous iPad Air’s A14 Bionic: 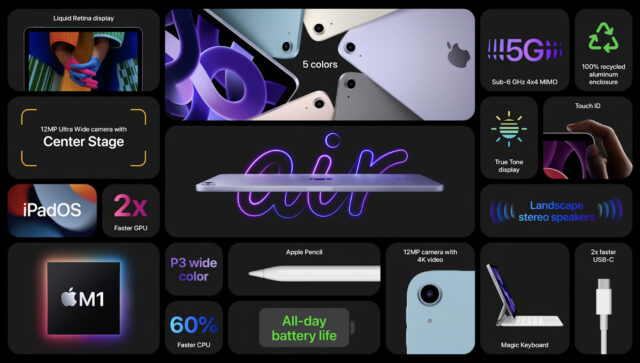 Other key changes in the new iPad Air include:

Beyond those changes, many other features remain the same. The Liquid Retina display seems little changed from that of the previous iPad Air with 3.8 million pixels, P3 wide color gamut, True Tone, 500 nits of brightness, and so on. Landscape stereo speakers and Touch ID authentication built into the top button also are comparable. Storage capacity is the same at either 64 GB or 256 GB—Apple has so far disregarded calls for a 128 GB iPad Air and iPad mini.

As before, Apple is offering the iPad Air in five colors. The previous colors were silver, space gray, rose gold, green, and sky blue. The new ones are space gray, starlight (silver/gold), pink, purple, and a new shade of blue. 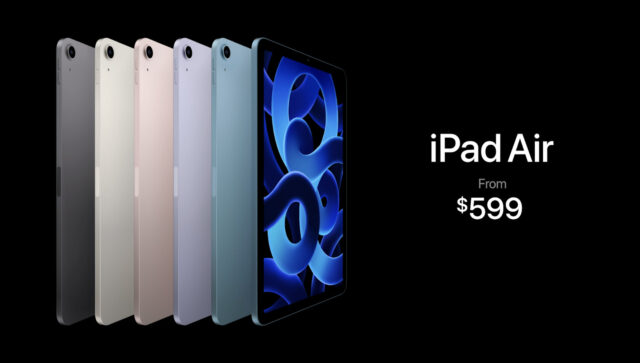