iOS 15.4.1 (266.6 MB on an iPhone 11 Pro) and iPadOS 15.4.1 (181.5 MB on an eighth-generation iPad) fix bugs introduced in iOS 15.4 and iPadOS 15.4, the most notable being a nasty battery drain that I and other TidBITS readers have been experiencing. The updates also fix accessibility bugs with unresponsive Braille readers and hearing devices losing connection with some third-party apps.

Equally as important, these updates fix one actively exploited security issue that allowed attackers to execute code with kernel privileges. If you’re running iOS 15.4 or iPadOS 15.4, you should install these updates right away. 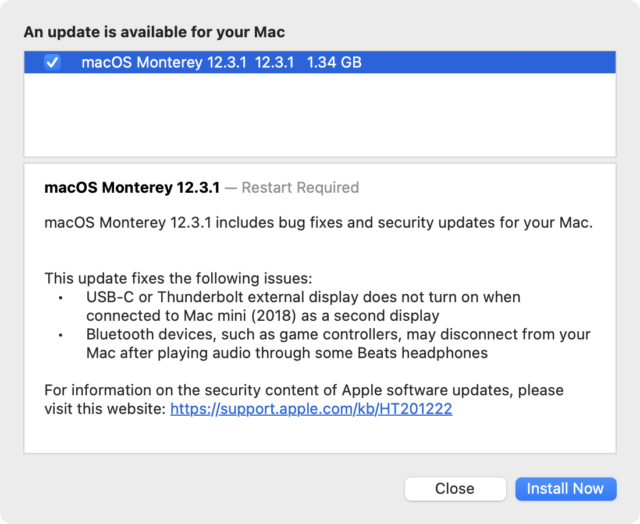 macOS 12.3.1 addresses two security flaws: the aforementioned arbitrary code bug and an exploit in the Intel graphics driver that could let an attacker read data from memory. Both have been actively exploited in the wild, so everyone running Monterey should update now.

Apple’s second-string operating systems also received updates, but details are light. It’s hard to feel much urgency in installing these updates, but it’s undoubtedly worthwhile at some point soon.

Let us know if you have any issues after installing any of this crop of updates.