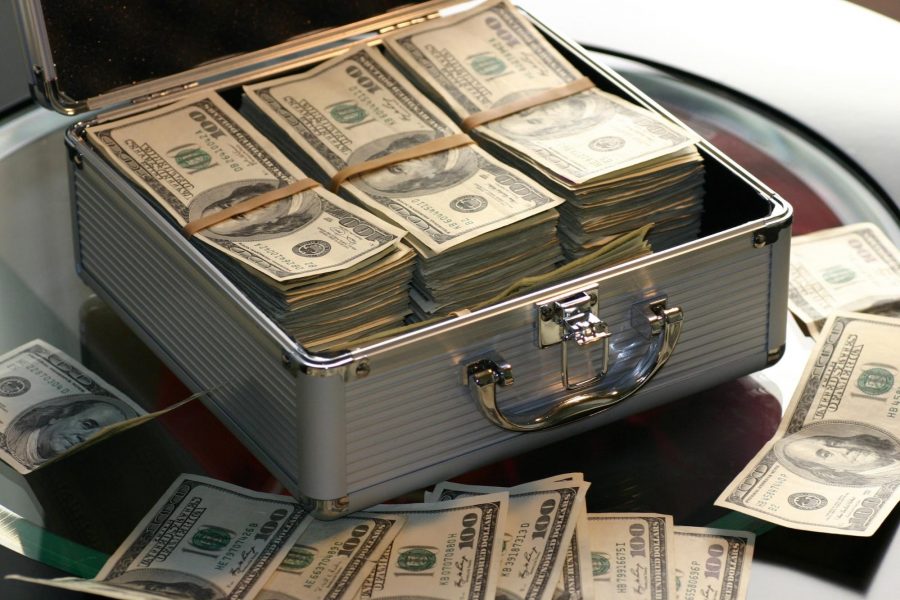 Reporting on its Q2 2018 financial results, encompassing January through March 2018, Apple announced a net profit of $13.8 billion ($2.73 per diluted share) on revenues of $61.1 billion, a figure in line with analyst expectations. The company’s revenues were up 16% compared to the year-ago quarter (see “Apple’s Q2 2017 Financial Results Show Slight Growth,” 2 May 2017). Apple CEO Tim Cook noted that this was Apple’s sixth consecutive quarter of accelerating revenue growth.

“We’re thrilled to report our best March quarter ever, with strong revenue growth in iPhone, Services, and Wearables,” said Cook. And revenue growth for iPhone was indeed strong, with $38 billion in iPhone revenue marking a gain of 14% year-over-year. While iPhone unit sales also increased, that figure was not nearly as strong, with only 3% more units sold in the current quarter than in last year’s. On the other hand, the average sales price for iPhones exceeded $720, a new high, and the high price of the iPhone X no doubt accounts for that increase and the percentage disparity between revenues and unit sales. In any case, the iPhone results should put to rest reports of weak iPhone X sales: Cook said that Q2 2018 was the first quarter in which the top-of-the-line iPhone model was also the most popular. 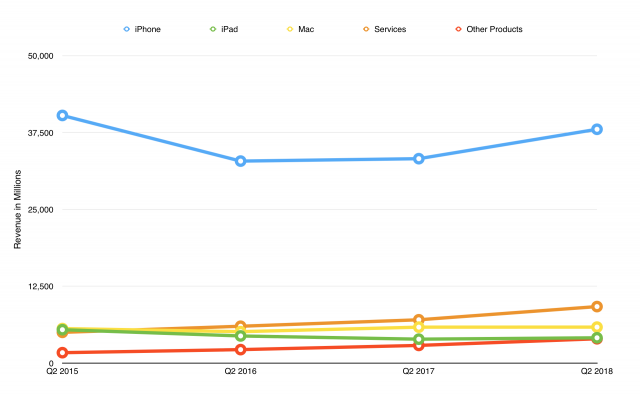 iPad sales rose 2%, and iPad revenue increased 6% year-over-year, bringing in $4.1 billion in revenue. Half of all iPad sales were to new customers, and iPad now has 50% of the tablet market, up from 40% a year ago.

At $5.8 billion, Mac revenue was flat year-over-year, but the Mac business did post a drop in unit sales of 3%. No new Macs entered the market during the quarter, and reports of user dissatisfaction with the latest MacBook Pro keyboards may also have affected those results.

Services revenue went up 31% year-over-year, tallying $9.2 billion—almost as much as iPad and Mac revenues combined. It was the best quarter yet for services, and growth continues to be strong, Cook said, with a total of 270 million paying subscribers in the Apple ecosystem. Cook mentioned that the number of Apple Pay users doubled year over year.

Revenue for Apple’s Other Products category was up 38% year-over-year, totaling $4 billion—almost as much as the iPad alone. The HomePod, which launched in Q2 2018, is likely a factor, though Apple stayed mum on HomePod sales numbers. However, Cook did mention that wearables—including the Apple Watch, Beats headphones, and AirPods—were up almost 50%, and he added that the wearables business is now the size of a Fortune 300 company. While the company still hasn’t shared Apple Watch sales specifics, Cook said that Apple Watch revenue grew by double digits year-over-year, achieving a new March quarter record.

During the quarterly investor call, Cook claimed last year’s Republican tax bill would help Apple create 20,000 new U.S. jobs, spur a 16% increase in Apple’s stockholder dividend, and make possible the company’s new $100 billion share repurchase authorization. Apple has returned $275 billion to shareholders since August 2012. As he discussed that, Cook almost casually mentioned a new American campus, which he said would be described in more detail in the future. The company can certainly afford another new campus, as Apple now has $267.2 billion in cash.