Apple makes great hardware, but many iPhone and iPad users prefer to use Google’s services, and so turn to iOS apps from Google like Gmail and Google Photos. As a result, this year’s Google I/O keynote—part of a Google-focused developer conference akin to Apple’s upcoming Worldwide Developers Conference—had news of interest to Apple users. (Here’s a full rundown of the event’s announcements.)

As the keynote bounced from app to app and service to service, it was fascinating to see just how many changes to Google’s services and apps will affect Apple users over the coming weeks and months. Google’s email, photo, news, mapping, and assistant services—and their corresponding iOS apps—are all seeing upgrades to varying degrees.

Little of the keynote focused on hardware, unlike past events that unveiled Google-branded phones and gadgets meant to compete with Apple hardware (see “New Google Gear Once Again Takes Aim At Apple Products,” 18 October 2017).

But those considering the purchase of a HomePod could have reason to reconsider as Google unveiled improvements to Google Assistant, the search giant’s Siri competitor, and revealed a coming wave of Assistant-ready third-party speakers that—unlike the HomePod—incorporate screens.

Gmail Gets Closer to Writing Email for You

At Google I/O, it announced a Smart Compose feature that uses artificial intelligence to give suggestions on how to complete sentences. As a user composes an email, Gmail will provide sentence-autocomplete choices that can be triggered with the press of a Tab key—or just ignored. Gmail even will suggest entire new sentences based on contextual information, such as “Have a great weekend!” sign-off if you’re composing an email on a Friday.

Smart Compose is a logical follow-up to Smart Reply, a Gmail feature that suggests quick email replies generated via artificial intelligence from a message’s contents.

Smart Compose will appear in the consumer version of Gmail over the coming weeks—make sure you’ve opted in to the updated interface, and also enabled “experimental access” in settings—and will migrate to professional G Suite accounts later.

Apple’s Photos app and companion iCloud Photo Library service have a serious rival in Google Photos, thanks to it being free and boasting superior AI-driven options. Google has announced a fresh batch of features that, like earlier capabilities, tap into the company’s expertise in machine learning:

Finally, a new Google Photos partner program will make it easy for other developers to integrate the service into their apps and devices.

The new Google News app, being released for iOS in the next few days, uses artificial intelligence to improve how it organizes the millions of news stories it finds on the Web. A For You section takes a stab at guessing which breaking stories will be of most relevance and interest to you, organizing the stories into a daily briefing.

A new feature, called Newscasts, aggregates different kinds of content related to a story—including tweets, YouTube videos, quotes, and articles—for an easy-to-scan overview. Then, if you want more detail, you can tap View Full Coverage to get recent stories along with related content that was published days, weeks, or months ago. Google emphasizes that this content is unfiltered, so everyone sees it in exactly the same way.

Elsewhere in the app, though, Google News lets you fine-tune which news sources you want to see. These include about 1000 magazines, a feature imported from Google Play Newsstand and comparable to Apple’s Texture.

You can also subscribe to paid news sources, like newspapers, right in the news app. Similarly, a new “Subscribe with Google” feature lets news sources offer Google accounts as a subscription option right on their sites.

Take Me Out to the Ball Game

Mapping apps have evolved from being navigational tools into windows to the world around you, showcasing places to eat and more. Google has been increasingly focusing its Google Maps app in that direction. At Google I/O, the company highlighted a handful of new or improved Maps features that are due within a few months.

One of these, a new For You tab, provides recommendations on new restaurants and other attractions in your neighborhood. As a presenter described it, “With zero work, Maps gives me ideas to kick me out of my rut and try something new.”

Alongside For You is an Explore screen that tracks dining and event options in a particular area. It functions as a checklist of sorts as you work your way from one place to another. 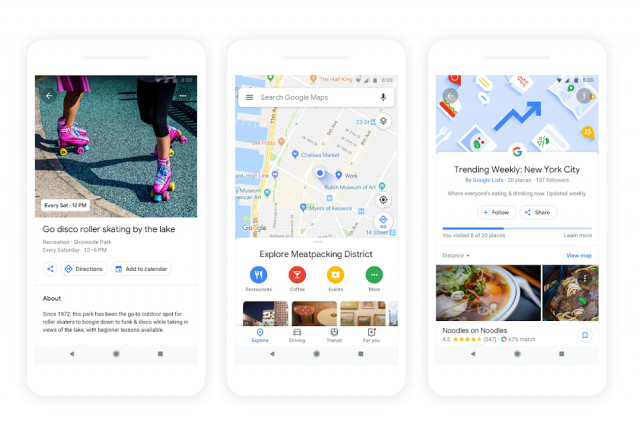 A complementary feature called Your Match tells you whether you might like or dislike a particular establishment. Such a “personal score for places” is based on your past activity as well as other information. We’re curious to see how accurate this ends up being.

Lastly, for those meeting up with others, Google Maps aims to simplify making plans. A long press on a restaurant listing adds it to a short list and groups of friends can then vote for items on that list.

Though Google Assistant can’t integrate into iOS as tightly as Siri, it’s nonetheless a powerful tool for Google-inclined iPhone users who want to tap into its growing feature set. In terms of raw capabilities, Google Assistant has lately outpaced Siri (see “Beyond Music: Comparing the HomePod to Amazon Echo and Google Home,” 15 March 2018). These changes will put Siri even farther behind.

Google this week announced a bunch of Google Assistant upgrades that, it claims, will make its virtual sidekick more “naturally conversational.” For starters, Google has added six new male and female voices (for a total of eight). The voices are already available in the Google Assistant iOS app—go to Settings > Preferences > Assistant Voice. If you are using one of Google’s Home speakers, the new voices should be promptly reflected on those devices as well. A ninth voice, that of music star John Legend, will also chime in on occasion, starting later this year.

Google is also fine-tuning how Google Assistant interacts with people. One feature, called Continued Conversation, lets you open with a “Hey, Google” greeting but then engage in follow-up interactions without having to repeat the trigger phrase each time. In this regard, Google is emulating Amazon’s recently announced Follow-Up Mode for its Alexa assistant. Also new are Multiple Actions that consist of combination commands such as: “What is the weather like in New York and Austin?”

Similarly, new Custom and Scheduled Routines can get multiple things done with a single command. A “Hey Google, dinner’s ready” command, for instance, might turn off the TV, turn on music, dim the lights, and broadcast “Dinner time!” to Google Home speakers throughout the house. Google previously provided a handful of ready-made routines, but now you can roll your own. However, routines that are scheduled for a day or time will not be possible for a few more months.

For the kids, there is a new Pretty Please feature. When accessing free family-friendly games, activities, and stories from companies like Disney, Google Assistant gives positive reinforcement when children make requests politely. Thanks, Google.

One major feature, arguably the keynote’s highlight, had Google Assistant pretending to be human as it telephoned a hair salon to make an appointment. This demo proved instantly controversial, causing Google to later make assurances it wouldn’t really use such an imposter tactic. In any case, this was a proof-of-concept demo of no immediate relevance to iPhone users.

The Google I/O keynote was replete with other announcements and demos that had no bearing on Apple users. You’re certainly welcome to watch the full event, but your eyes may glaze over during lengthy portions on the Android operating system, Google’s Material Design theme, and so on. (OK, the Waymo driverless cars being tested in Phoenix are super cool.)

But enough of the keynote focused on services and apps that many Apple users rely on to give us confidence that Google isn’t deprecating Apple users. Email, photos, news, maps, and verbal searches are a major part of what we iPhone owners do on our devices every day. The question is, what new capabilities in these areas will Apple reveal in its WWDC keynote in a few weeks?