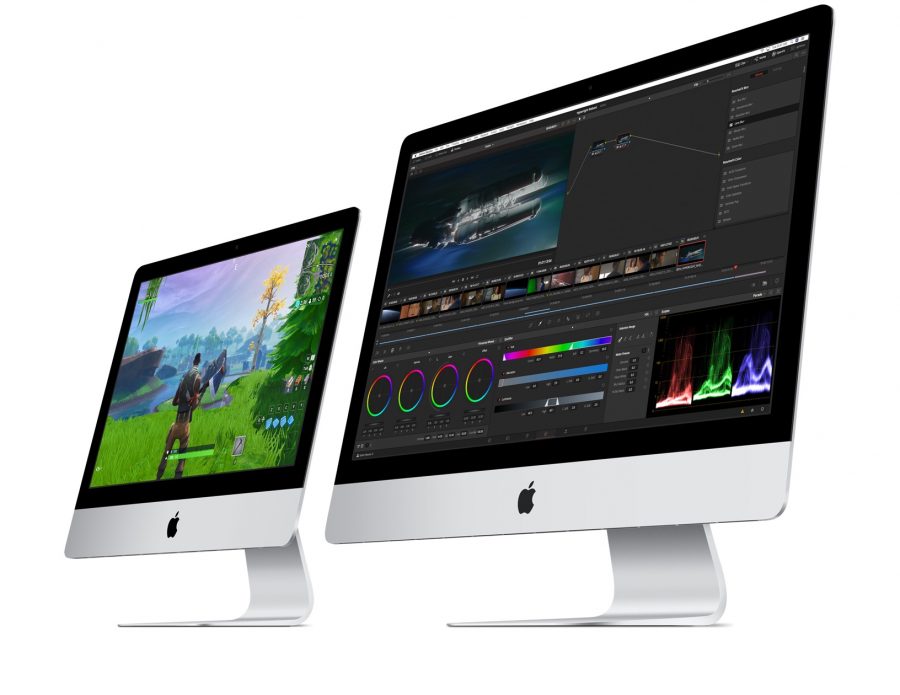 Apple has released new 21.5-inch and 27-inch iMacs with increased performance thanks to updated multi-core processors, optional Radeon Pro Vega graphics chips, and faster RAM. Apart from those changes, the iMac models remain the same as they were, not even picking up Bluetooth 5.0 or Apple’s T2 security chip, which is sad.

The non-Retina 21.5-inch iMac remains available for $1099 but sees no changes. However, Apple tweaked the build-to-order options for the iMac Pro, which hadn’t received any attention since its launch 15 months ago (see “Apple Releases the iMac Pro,” 15 December 2017).

It’s worth noting that Apple will almost certainly release macOS 10.14.4 Mojave and iOS 12.2 next week once these new iMacs join yesterday’s new iPads in Apple retail stores. watchOS 5 and tvOS 12 updates are likely as well, if only to participate in whatever security updates the main two operating systems receive.

Before I get into the details, a warning is in order. When Apple last revised the 21.5-inch and 27-inch Retina iMacs (see “Apple Beefs Up iMac and MacBook Lines, Teases the iMac Pro,” 6 June 2017), a TidBITS reader pointed out that you could pay more or less for the same configuration, depending on how you started.

In short, for certain configurations, starting with the high-end options will give you a better Radeon Pro graphics processor than if you start with a less-capable configuration and beef it up to be otherwise identical.

For details, read the full article at “2017 iMac Configuration Quirks: Don’t Get Burned!” (12 June 2017), and note that the first two sections about the Radeon Pro options are still true of the new models.

Apple also tweaked the build-to-order options, letting you configure the entry-level 21.5-inch Retina iMac with 32 GB of RAM and a 1 TB SSD, neither of which could be combined with the slowest processor before. It’s a minor change—most people who would max out RAM and storage would also want one of the faster processors. We always recommend SSDs over Fusion Drives, but whatever you do, don’t get the 1 TB hard drive option; it will destroy the iMac’s performance. Apple should drop the hard drive model entirely.

Pricing remains the same, with the low-end configuration starting at $1299 and a fully tricked-out machine coming in at $2999.

The 27-inch iMac with 5K Retina display has long been one of my favorite Macs—I’m still using the original model from 2014 and a recent upgrade from 16 GB to 32 GB of RAM seems to have eliminated some nagging performance issues that cropped up with macOS 10.14 Mojave. However, it hadn’t received much love from Apple for ages—the last performance bump happened almost two years ago.

The changes in the 27-inch line mimic those in the 21.5-inch line, with faster processors, updated graphics chips, and faster memory:

Despite the notably faster processors, pricing stays the same, with the low-end configuration at $1799 and a maxed-out configuration hitting $5249.

As powerful as the 27-inch iMac with 5K Retina display can be, it still doesn’t compare with an iMac Pro, which can be configured with an 18-core Intel Xeon W processor.

Although Apple’s press release about the new iMacs didn’t mention it, the company also added some high-end options for the iMac Pro. You can now get it with 256 GB of RAM for a whopping $5200 and a Radeon Pro Vega 64X GPU with 16 GB of VRAM for $700. It’s a little freaky to imagine an iMac with more RAM than there is SSD storage in the entry-level MacBook Air.

Simultaneously, MacRumors reports that Apple reduced the prices of some of the build-to-order options, cutting $400 from the price of RAM upgrades, $50 from the Radeon Vega Pro 64 graphics processor price, and $400 from the 4 TB SSD storage option.

Performance Improvements Are Always Welcome, But…

It’s hard to quibble with any of these changes—faster performance for the same price is a good thing. But none of these improvements are significant enough to warrant upgrading from an existing Retina iMac. The fact that Apple updated these models and added some high-end options to the iMac Pro also suggests that the company doesn’t plan to do anything more significant with them for the foreseeable future.

Of course, the elephant in the room for some people is the update to the Mac Pro, which Apple promised for sometime this year. It’s relevant mostly to those who have been debating whether to move from an older Mac Pro or 27-inch iMac to an iMac Pro now, or to hold out for whatever Mac Pro Apple releases next.

But if you’ve been waiting to upgrade to a new iMac from a significantly older Mac, now is as good a time as any.