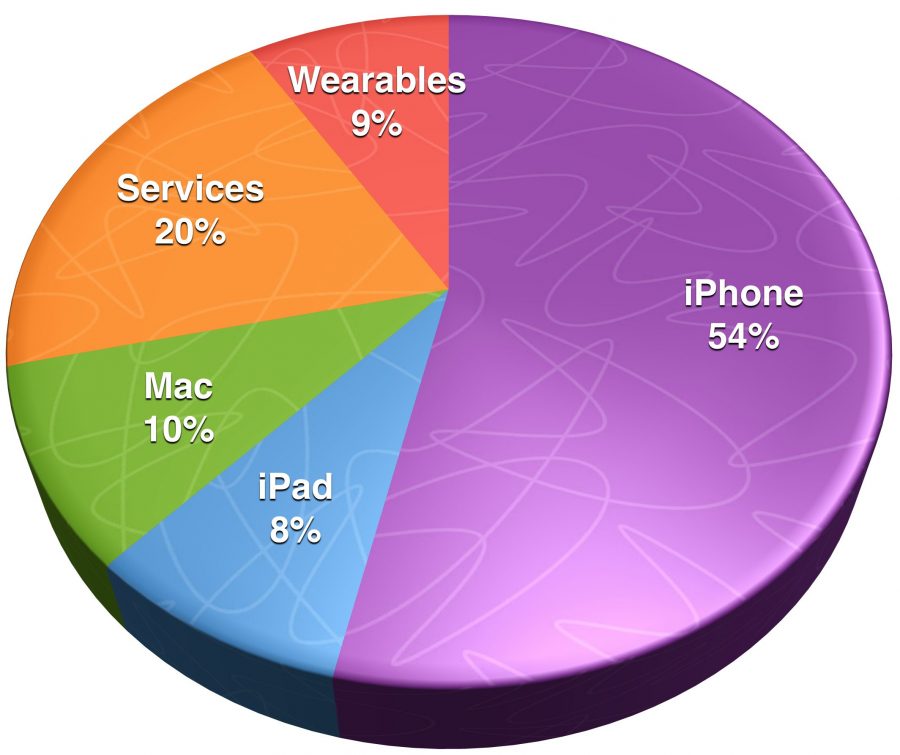 Reporting on its Q2 2019 financial results, Apple announced net profits of $11.56 billion ($2.46 per diluted share) on revenues of $58 billion. The company’s revenues are down 5% compared to the year-ago quarter with net results down by 10% (see “Apple’s Q2 2018 Financials Prove iPhone X Doubters Wrong,” 1 May 2018). Even with these depressed numbers, Apple beat analyst forecasts that had predicted revenues of $57.3 billion and earnings per share of $2.36.

Before we dive into the breakdown, we’d like to remind you that Apple has significantly changed how it reports its quarterly results in 2019. Apple no longer reports unit sales, though it still breaks out revenue by category. The Other Products category has been redubbed “Wearables, Home, and Accessories,” but for now we’ll use both names interchangeably to chart that category’s historical trends. Also, the company is now reporting gross margin for both its physical products and its services. And, as with Q1 2019 (see “Apple’s Q1 2019 Results: iPhone Bad, the Rest Good,” 29 January 2019), the revenue figures from the year-ago quarter are different than what we’d reported last year because Apple now amortizes the cost of free services against the Services category and not against the associated hardware categories.

In short, Apple’s results were a mixed bag. 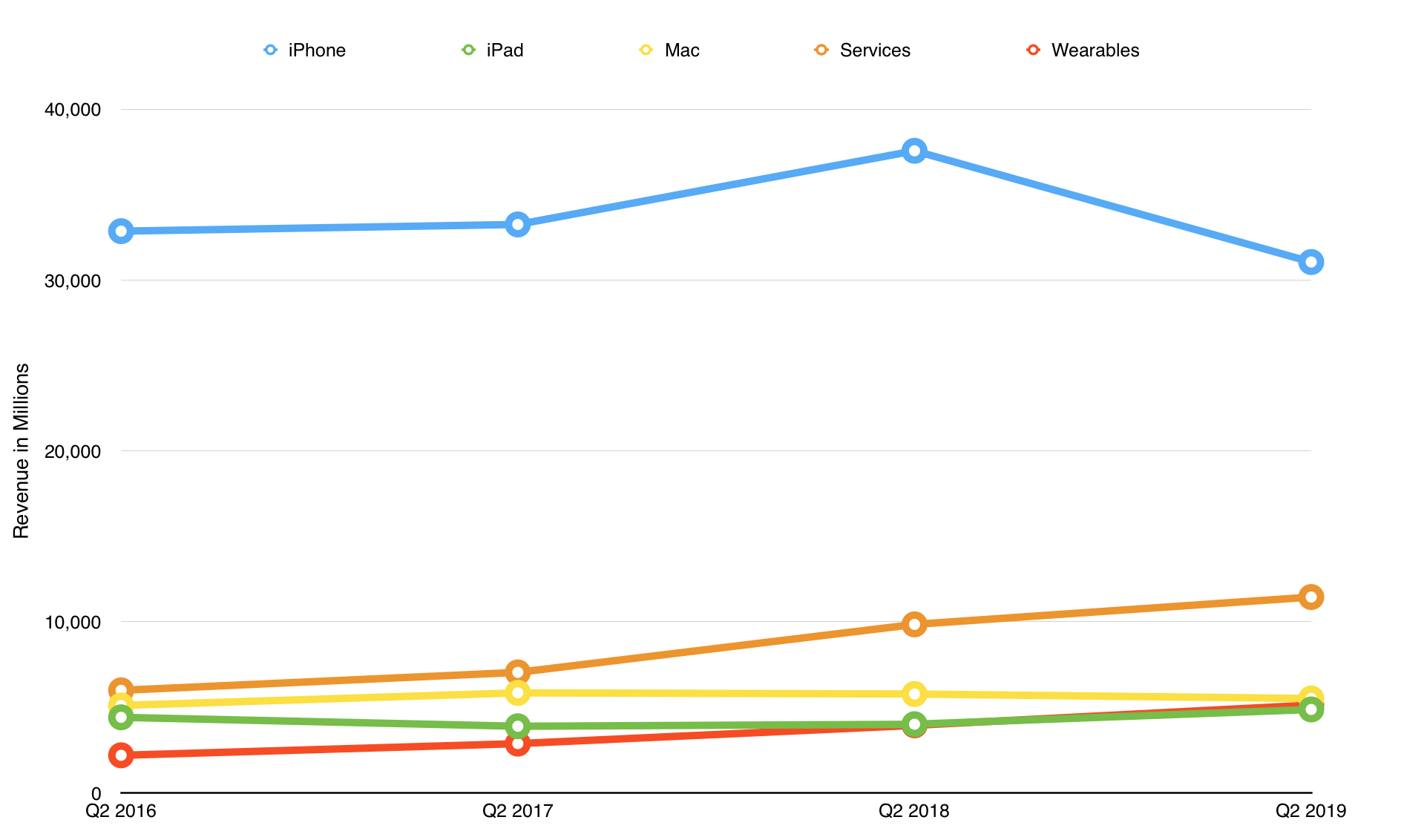 As with last quarter, iPhone revenues fell hard, with a year-over-year decline of 17.3%. Apple CEO Tim Cook claimed that most of the decline happened in November and December, so Apple remains hopeful that iPhone sales are now on the upswing. Nonetheless, the fact that the iPhone user base is larger than ever before also means that there are fewer non-iPhone users to whom Apple can sell its products.

One bright spot for the iPhone is Apple’s settlement with Qualcomm over modem chips, which Cook said he felt good about (see “Apple and Qualcomm Settle Patent Royalty Suits and Agree to Licensing,” 17 April 2019). Presumably, that points to Apple gearing up for 5G support in future iPhones, but Cook refused to answer questions about Apple’s 5G plans.

Mac revenue was down 4.6% year over year. Interestingly, Cook said that Apple believes Mac sales would have been up in the quarter if not for “processor constraints,” a comment which surely will lead to much wailing and gnashing of teeth at Intel’s headquarters as well as to more speculation about Apple replacing Intel CPUs with its own ARM-based chips in future Macs. Even with the overall lower Mac revenue numbers, Apple noted double-digit Mac sales increases in both Japan and Korea.

The Wearables, Home, and Accessories category also posted a big quarter, with revenue up 30% from the year-ago quarter. Cook specifically called out sales of AirPods, which he called “off the charts,” adding that Apple is trying to meet demand.

Apple is betting a large part of its future hopes on its Services product category and was therefore pleased to announce that Services revenue was up 16.2% year over year and that the category now comprises 20% of Apple’s revenue. With subscriptions being a reliable source of continuing income in that product category, the announcement that Apple now has 390 million subscriptions was particularly welcome. Given that other Apple subscription services either just coming online, such as Apple News+, or coming in the near future, such as Apple TV+, the contribution of Services to Apple’s bottom line promises to become even larger.

Or so Apple hopes. During an exchange with one questioner from Dialog Capital Markets, Cook seemed to get a bit defensive about Apple’s new slew of services, saying that Apple wouldn’t create a service that wasn’t meaningful. “These aren’t hobbies,” the CEO said rather gruffly.

What’s a shareholder to make of all this? Without question, having two consecutive quarters of declining results must surely alarm many investors. To soothe shareholders’ jangled nerves, Apple is increasing its quarterly dividend to shareholders by 5%, making it $0.77 per share payable on 16 May 2019 to shareholders of record at the close of business on 13 May 2019. That’s Apple’s seventh dividend increase in under 7 years. Apple is also increasing its share buyback program by $75 billion.

Most observers expected the iPhone market to become saturated, and for Apple’s decade-long record of revenue growth to end. Now that it has, though, it doesn’t quite look like the end is nigh. Early indications suggest that Apple’s pivot to Services, and its increasingly vibrant Wearables, Home, and Accessories segment, are benefiting from a saturated iPhone market. After all, that is the very market into which Apple can sell its services, subscriptions, and accessories. Now that Apple has successfully created an enormous ecosystem, the time seems ripe for the company to exploit it in creative ways.