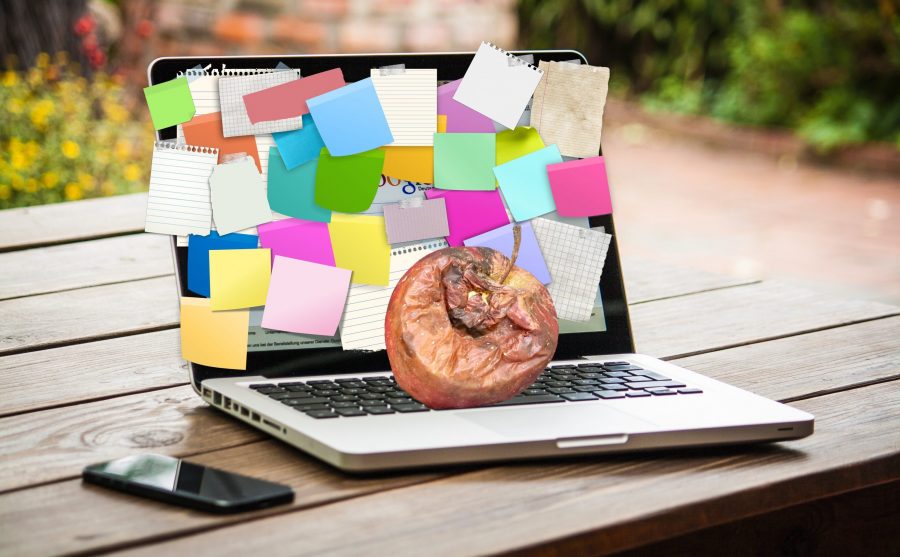 I’ve been remiss in keeping up with my Bad Apple column, which exists to document aspects of the Apple experience that are incontrovertibly wrong and have an obvious solution. But it’s time for another one because I’ve just figured out one of the reasons that Apple’s Reminders app has been getting on my nerves lately: the silly thing still can’t sort list items to save its life. Bad Apple!

Reminders originated with iOS 5 and OS X 10.8 Mountain Lion, when Apple split iCal into Calendar and Reminders. It was a simple app then, and it has remained so across years of iOS and macOS updates. Unfortunately, when it comes to sorting list items in Reminders, “simple” seems to mean “embarrassingly underpowered.”

Only Manual Sorting in Reminders in iOS

In the iOS version of Reminders, eight major updates later, you still cannot sort Reminders lists in any way other than manually. And even that feature doesn’t merit a mention in Apple’s documentation of Reminders. Bad Apple!

Let me rectify that omission. When in a list, you can tap Edit and then drag reminders around by their handles to rearrange them. 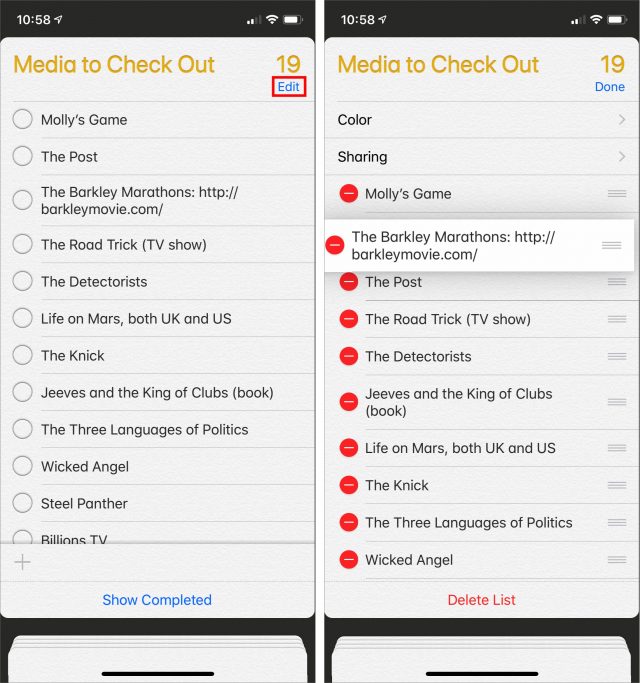 It’s not as though the concept of sorting is foreign to iOS. In the Settings app, both Contacts and Notes offer sort options, and when you’re in the Music app’s Library, you can sort within the lists of albums, playlists, and songs.

The only justification I can imagine is that Apple doesn’t think anyone will use Reminders to store so many items that sorting would become useful. It’s true—if you never put more than about ten items in a Reminders list, you can probably see them all on one screen without scrolling.

Although Reminders predates the so-called “Marzipan” apps that Apple ported from iOS to macOS in macOS 10.14 Mojave (News, Home, Voice Memos, and Stocks), we should have realized that it foreshadowed just how lousy those apps would be.

The Mac version of Reminders is more capable than the iOS version—not that it’s a high bar—and notably, it does allow some sorting. Choose View > Sort By, and you’re presented with five options: Manual, Due Date, Priority, Creation Date, and Title. That’s good, right?

Not so fast. As a Mac user, I naturally assumed that each list in Reminders had its own sort order. If I have a to-do list where I’m prioritizing tasks, I’d want to sort by Priority. And if I have a list of article ideas, I’d want to sort them by Title. Manual would be useful for a process list, where I want to go through a particular set of tasks in order. Due Date is obviously what I’d want for a task list where the completion date is paramount, and I’m sure there are uses for Creation Date even if none spring to mind at the moment.

But no, Reminders supports only a single sort order that applies to every one of your lists. This is what threw me since I’d be in a list and notice it wasn’t sorted in a useful manner, so I’d change the sort order. Then, sometime later I’d be in a different list and notice that it too was sorted wrong. Since I have a variety of list types, any change I made to the sort order for one list was bound to mess up another list. Bad Apple!

At least Apple acknowledges in its documentation for the Mac version of Reminders that sorting is possible, and while the company doesn’t cop to the fact that the sorting applies to all lists, it does warn that, unlike the reminders and lists themselves, whatever sort order you set will not sync to any other Macs or iOS devices where you use Reminders.

There’s only one reason I actually like Reminders: its Siri integration (when it works—see “Bad Apple #3: Reminders Doesn’t Listen to Siri,” 6 April 2018). Things to do pop into my head throughout the day, and if I can use Siri to make myself a reminder, they’ll get done.

Given Apple’s recent financial woes (only $11.56 billion in profit last quarter—see “iPhone Sales Kept Sinking in Apple’s Q2 2019,” 30 April 2019), I worry that the company lacks the necessary resources or fortitude to find a student from Cupertino High School to add per-list sorting to Reminders. Syncing such sort orders through iCloud is undoubtedly even harder, but maybe Apple already has an undergraduate intern who could puzzle through CloudKit to add such a feature. Apple’s professional programmers haven’t figured this out in nearly 8 years, but I’ll bet a few kids could do it in a weekend. It’s sorting, not rocket science.

Until Apple gets its act together, I’m going to look for alternative apps that tap into the Reminders database. That way I can continue to use Siri to create reminders without suffering with the actual Reminders app. Both BusyCal and Fantastical can access and display the contents of Reminders, let you choose which Reminders lists to show, and try to sort intelligently (with dated items sorted by date and undated items sorted by title). Fantastical even lets you show reminders in its menu bar-based window, which you can tear off and position anywhere onscreen. But neither is really focused on reminders, so I’ll have to see if their approaches work for me.

As far as standalone apps go, the three I’ve found so far that run on both the Mac and iOS and that connect to the Reminders database are 2Do, GoodTask, and Memento. 2Do is free for iOS with a variety of in-app purchases; its Mac version costs $49.99. GoodTask is free for iOS and costs $19.99 on the Mac. And Memento costs $3.99 for iOS and offers only a 0.1 beta of a Mac version so far. I haven’t tried any of them yet.

Have you run across any other task-management apps that either sync with Reminders or offer standalone Siri support?