The main draw is the new Apple TV app in iOS 12.3 and tvOS 12.3, which replaces the TV app. Later this year, that app will support Apple’s new Apple TV+ service, but for now, the main new feature is support for channels, which lets you subscribe to cable services like HBO and Showtime. The advantage of signing up through the Apple TV app is that you can share your subscription with your Family Sharing circle and download content for offline viewing. Apple made sure to point out that the Apple TV app is the only place where HBO subscribers can legally download episodes of the hit show Game of Thrones, which is approaching its grand finale (viewers outside the US have other options).

In a twist even more shocking than anything Game of Thrones writers David Benioff and D. B. Weiss could muster, Apple also updated the third-generation Apple TV to give it the new Apple TV app. So to all the readers who have asked us over the years when Apple was going to update the third-generation Apple TV, which sold from 2012 through 2015, congratulations, your faith has been rewarded! (The update even includes 3 security fixes.)

The other big news in iOS 12.3 and macOS 10.14.5 is support for beaming content to Samsung TVs with AirPlay 2, which was announced early this year (see “Apple Opens iTunes Video and AirPlay Up to TV Rivals,” 9 January 2019). Select TV sets from LG, Sony, and Vizio will gain AirPlay 2 support later this year.

Let’s take a look at what else the updates provide.

In addition to AirPlay 2 support on Samsung TVs, iOS 12.3 also makes it so that you can AirPlay content from Siri Suggestions (though we’ve never seen a Siri Suggestion for movies or TV shows). Plus, the release notes say “One-tap playback automatically plays your chosen TV show or movie on the last screen you used, based on time and location.” We’re not entirely sure how that will work. 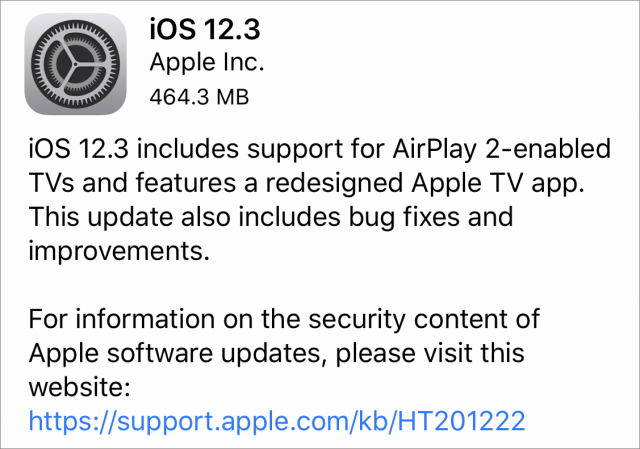 iOS 12.3 features two additional service-related improvements: you can follow an Apple News+ magazine from the catalog browsing view, and Apple Music’s For You tab now updates multiple times per day. That latter improvement doesn’t address any of our suggestions in “Four Ways Apple Could Improve Apple Music” (11 March 2019) but it should make the For You suggestions more useful.

iOS 12.3 also fixes a handful of bugs that could:

iOS 12.3 is also available for the HomePod, where it adds support for joining some types of enterprise networks that require unique credentials. By default, the HomePod will install iOS 12.3 automatically, but you can disable automatic updates and install manually if you prefer. In the Home app on the iPhone, tap the house button in the upper-left corner, and under Speakers, tap Software Update.

Unsurprisingly, the macOS Mojave 10.14.5 update follows in iOS 12.3’s footsteps with support for sharing media content from your Mac to AirPlay 2-enabled smart TVs and by letting you follow a magazine from the Apple News+ catalog browsing view. 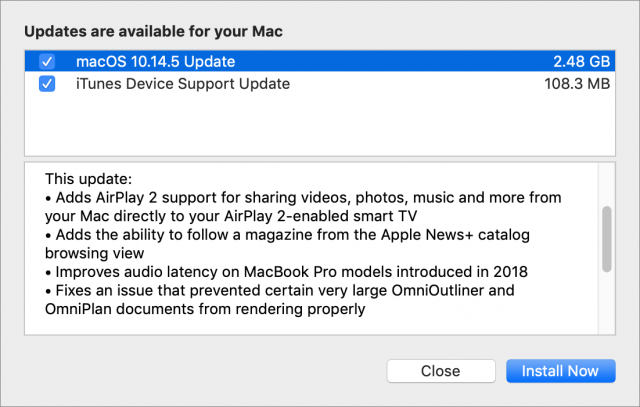 The remaining five bug fixes are quite specific but will be extremely welcome to particular segments of the Mac-using audience.

macOS 10.14.5 includes 26 security fixes. The update weighs in at 2.48 GB, and you can install it in the Software Update pane of System Preferences. Standalone delta (2.5 GB) and combo (2.62 GB) updates are now available.

If you’ve had trouble with the first restart after a minor upgrade, try quitting all running apps first or log into a clean admin account. See this discussion in TidBITS Talk for more details.

As always, we recommend caution with installing macOS 10.14.5 unless you’re an audio professional or OmniOutliner/OmniPlan user looking for fixes. Give it a week and then install if the Mac community doesn’t start discussing update problems.

Oh, one more thing. In an update that appeared alongside macOS 10.14.5, Apple has released iTunes Device Support Update, a 108.3 MB download that supposedly “ensures proper updating and restoring for iOS devices using iTunes for Mac.” It’s probably worth installing if you use iTunes to manage your iOS devices.

The only other change is a fix for a bug that prevented the numbers on the Explorer face from appearing for some users. There are also 18 security fixes, but again, Apple hasn’t yet posted details.