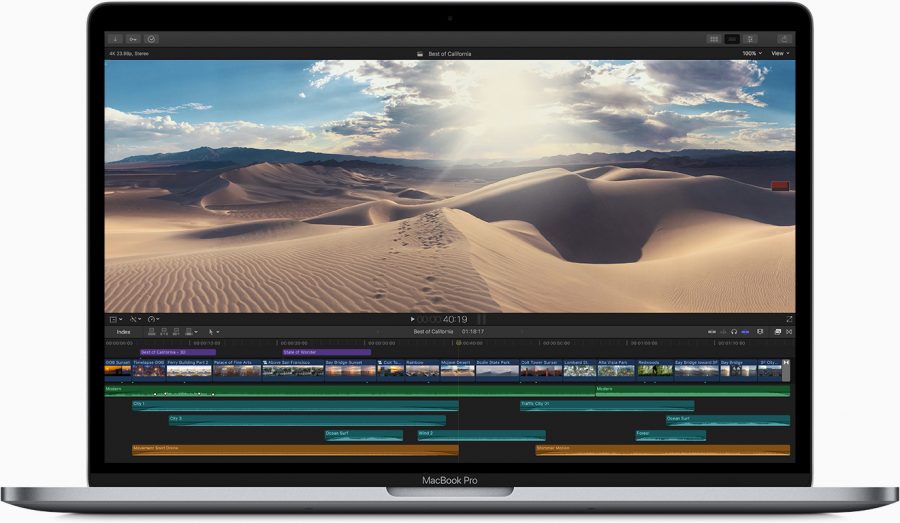 In the lead-up to WWDC, Apple has updated its Touch Bar-equipped MacBook Pro line with 8th and 9th-generation Intel Core processors that Apple claims make the quad-core models twice as fast and the 6-core models 50% faster. Also, for the first time, you can buy an 8-core 15-inch MacBook Pro. Besides CPU upgrades, the tech specs aren’t much different than last year’s models.

But the question on everyone’s mind is: has Apple fixed the damned keyboard yet?

Apple is finally officially addressing butterfly-switch keyboard issues in a MacBook Pro revision. Since the company first introduced the keyboard design in 2015, it has been a persistent pain for owners, who have suffered from keys that stick, repeat multiple times, or just stop working. Complaints about the issue have proliferated, and nearly everyone I know with one of these keyboards has experienced some problems (see “Class-Action Suit Filed against Apple for MacBook Butterfly Keyboards,” 16 May 2018). The problem gained mainstream attention after Joanna Stern’s damning Wall Street Journal video.

If you hate the key feel or the layout, you’re out of luck, but Apple has made an unspecified materials change in the butterfly mechanism that the company claims will at least make it more reliable. Last year, Apple added a silicone membrane to the keyboard, officially to make it quieter, but unofficially to keep dust and debris out of the butterfly mechanism (see “Apple Updates MacBook Pros with Faster CPUs, Higher RAM Ceiling, True Tone Display, and T2 Chip,” 12 July 2018). That membrane may have helped in some cases, but certainly didn’t solve all the problems (Reddit user cil3x tore down a MacBook Pro and proved that dust wasn’t the real problem).

That’s good news to anyone in the market for a new MacBook Pro, but there’s similarly good news for existing owners as well. Apple is expanding its Keyboard Service Program to all existing butterfly keyboard models, dating back to 2015, regardless of warranty status (see “Apple Announces Service Program for Butterfly-Switch Keyboards,” 25 June 2018).

Additionally, Apple is making improvements to its repair processes to shorten turnaround times. Apple told TechCrunch’s Matthew Panzarino that anyone who brings a malfunctioning third-generation butterfly keyboard (which shipped in MacBook Air and MacBook Pro models from the past year), it will be replaced with the new fourth-generation model.

Apart from the elephant (butterfly?) in the room, the big news for these MacBook Pro models is their new Intel CPUs, including an 8-core processor, which promise some radical improvements for the 15-inch line.

The 13-inch MacBook Pro features the same Intel Iris Plus Graphics 655 as last year. The 15-inch models, which can switch back and forth between power-saving integrated graphics and faster discrete graphics, also remain the same as last year at the base level, although Apple added a couple of new high-end options.

With both the 13- and 15-inch models, you can choose between silver and space gray, and they’re available now on Apple’s online store and in Apple retail stores and independent Apple-authorized resellers.

As almost always seems to be the case, all these updates are welcome, and if you’ve been thinking about buying a MacBook Pro, now’s a good time. If you purchased one of the previous models in the last two weeks, remember that you can return it and get one of the new models for the same price. If you’re just outside the two-week window, you might be able to plead your case with an Apple Store employee in person, but we make no guarantees.

The big question is if Apple has finally fixed the butterfly keyboard’s inadequacies. As I said above, if you have problems with the key travel, key spacing, or arrow key placement, the answer is unabashedly no, since Apple seems uninterested in modifying the current industrial design. As for the reliability, will the fourth time be the charm? We’ll have to wait for early purchasers to report back if and when they start having problems.

Comments About Apple Updates MacBook Pros with 8-core Processors and a Keyboard Fix(?)