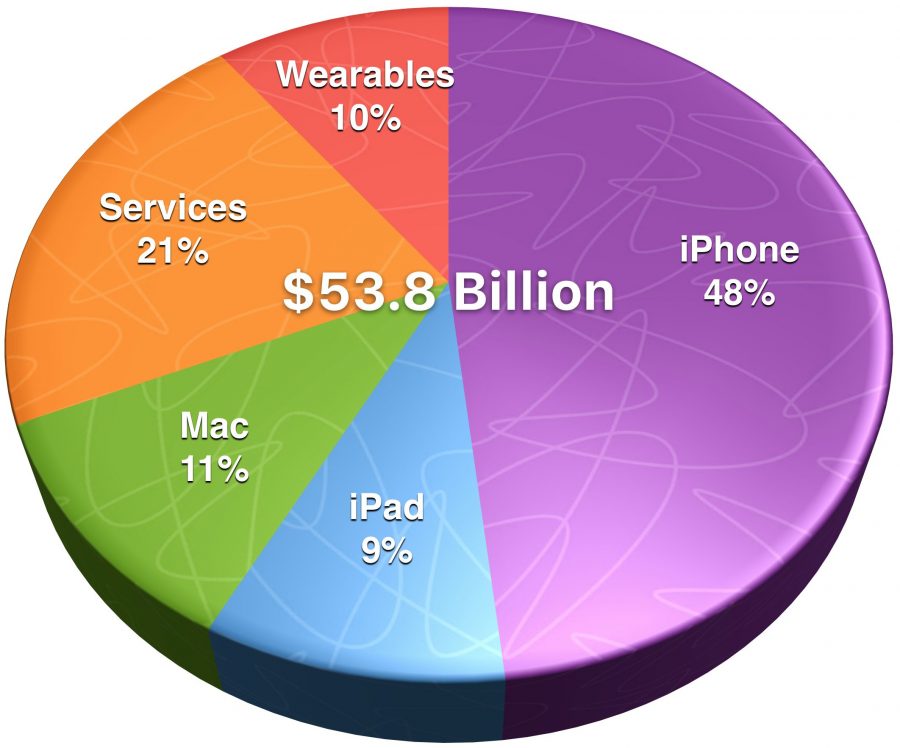 This was our biggest June quarter ever—driven by all-time record revenue from Services, accelerating growth from Wearables, strong performance from iPad and Mac and significant improvement in iPhone trends. 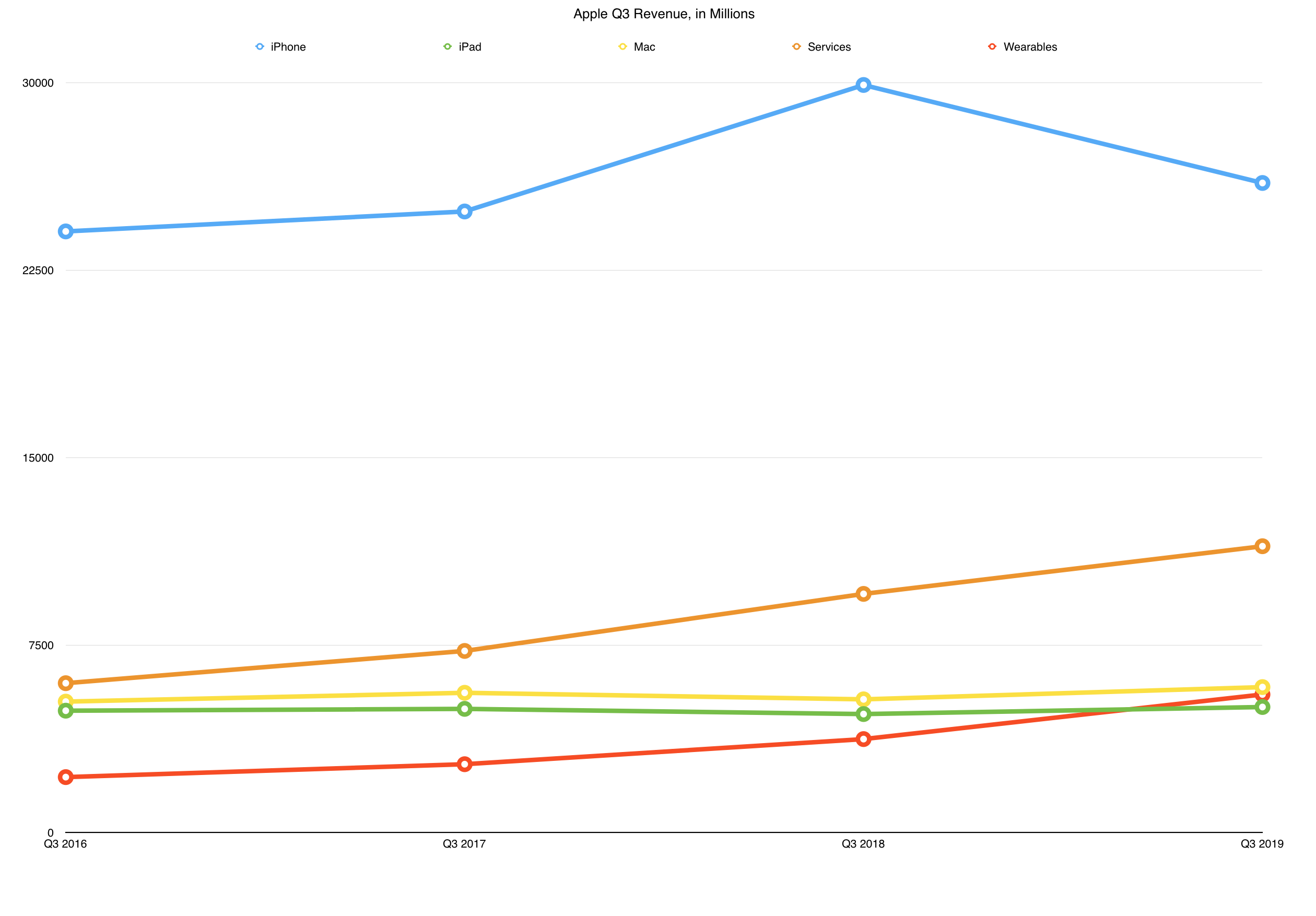 Apple’s financial picture was brightened by a successful quarter in China, which Cook pinned on the confluence of a VAT reduction in China, “pricing action” on Apple’s part, and Apple’s launch of trade-in and financing programs in its Chinese retail stores. Cook also cited strong App Store growth in China.

To no one’s surprise, Apple’s iPhone sales fell well below the sales figures posted for the same quarter last year, bringing in $25.9 billion in revenue compared to last year’s $29.5 billion, an 11.8% decrease. The iPhone accounted for only 48% of Apple’s revenues in Q3 2019, the first time since 2013 that the iPhone has accounted for less than 50% of Apple’s revenues. This decline would have been far more alarming had other revenue categories not moved in to take up the slack.

Apple’s Mac business appears to be healthier than ever. Mac sales exceeded the product line’s revenues from a year ago by 10.7%, with Apple taking in $5.82 billion compared to the $5.26 billion last year.

The company’s focus on the iPad in recent months also seems to be producing welcome revenue results, with iPad sales raking in $5.02 billion compared to the $4.6 billion in the year-ago quarter, an increase of 8.39%.

Apple’s increasingly important Services businesses continue to pay off handsomely as well. Services revenue grew 12.6% for the quarter compared to last year’s results. The category, which includes software, storage, and media revenues, brought in $11.5 billion during the quarter, more than the combined iPad and Mac revenues.

Filling in some details about the Services category’s rise, Apple CFO Luca Maestri noted that Apple now has 420 million paid subscriptions, a source of ongoing revenue that bodes well for the future. He also noted increases in the “attach rate” for AppleCare, which is also a profitable business, assuming, of course, that Apple product quality doesn’t decline significantly.

Cook took advantage of the quarterly results call to announce that Apple Card, Apple’s upcoming credit card, will arrive in August, and that it is currently being beta-tested by thousands of Apple employees. When the card becomes available to the general public, it will generate yet another stream of revenue. (See “Apple Card: More Than Just a Credit Card,” 28 March 2019)

Apple’s smallest products notched the largest percentage increases in revenues: the Wearables, Home, and Accessories product category (which includes devices like the Apple Watch, watch bands, AirPods, Apple Pencils, and all of Apple’s various cables and dongles) saw its revenue numbers soar by 48%. The $5.5 billion that the category brought in now puts it on the same level as Apple’s iPad and Mac product lines. Tim Cook noted that 75% of Apple Watch buyers last quarter were new purchasers, evidence that the device is becoming increasingly attractive to consumers, and he said that the Wearables business is now as large as a Fortune 50 company. Cook also remarked on another indication of this category’s growth: Apple TV viewership has increased 40% year-over-year, even before the slate of new Apple shows and channels arrive later this year, a sign that the streaming media device is far from languishing. (See “Apple Reveals Its Vision for TV,” 26 March 2019.)

If you’ve been following Apple’s quarterly reports over the past couple of years, the decline of Apple’s iPhone business coupled with the rise of both the Services and Wearables businesses should come as no surprise, which is why Apple has been so aggressively introducing new services like Apple News+, Apple Card, Apple TV+, and Apple Arcade.

With hardware revenue inevitably leveling off, Apple’s best recourse for growth is monetizing its existing installed base. That’s good news for Apple investors, as it shows forward-thinking leadership: many companies begin to march toward irrelevance when sales of their core products tapered off. But many Apple users may be less enthusiastic, as we will be increasingly expected to hand Apple more money on a monthly basis to get the most out of our Apple devices.

Comments About iPhone Down, Services and Wearables Up in Apple’s Q3 2019, Apple Card to Arrive in August