Apple recently “Sherlocked” a company called AstroHQ, by that firm’s own acknowledgment, with a macOS 10.15 Catalina feature called Sidecar for converting an iPad into a secondary Mac monitor.

So, what was AstroHQ to do? Company co-founder Matt Ronge took to Twitter earlier this month to announce Mac-to-Mac Mode for Luna Display. 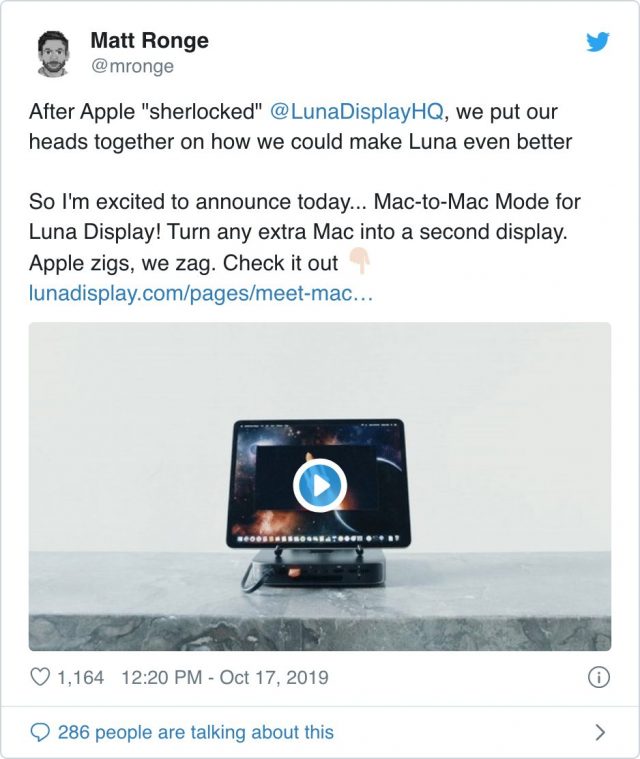 If such a Mac-as-secondary-display set-up sounds vaguely familiar, you might be thinking of Apple’s own Target Display Mode, which does pretty much the same thing, but only under limited circumstances. You can use it to turn certain older iMacs into second displays for other Macs. But these setups tend to be temperamental.

AstroHQ thinks the limited hardware requirements of Target Display Mode and its general flakiness give the Luna alternative an opening (shall we call it “Watsoning”?). For one thing, AstroHQ’s solution supports a wider range of dual-Mac scenarios—side-by-side MacBooks, for instance, or even a Mac mini with a MacBook functioning as its sole display. 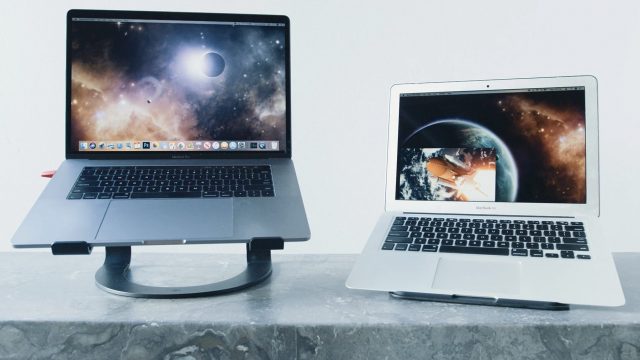 Getting Started with Mac-to-Mac Mode

AstroHQ sells two versions of its Luna dongle—a USB-C model for use with newer Macs, and a Mini DisplayPort version for use with older machines.

In addition to one of the dongles, Mac-to-Mac Mode set-ups require the following:

Enabling a Mac-to-Mac connection is straightforward, as it tends to be with a Luna-initiated Mac-to-iPad connection.

First, launch the Luna Display app on your primary Mac. If you’re running 10.14 Mojave or later, you might be asked to modify Accessibility settings in System Preferences, but you should need to do this only once. 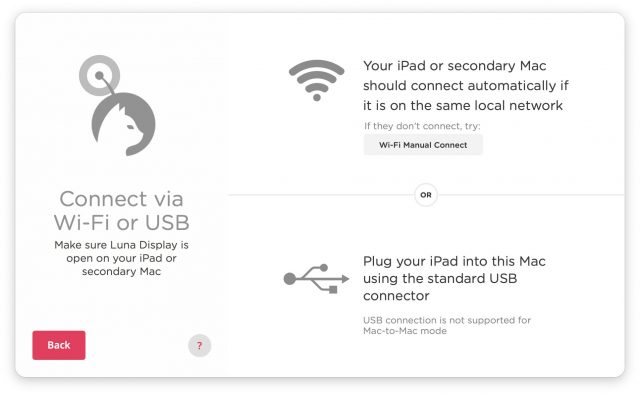 Second, open the Luna Secondary app on your secondary Mac. At this point, the two Macs should be able to link up automatically. After a bit of display flashing, your Desktop should expand from the primary Mac to the secondary Mac. 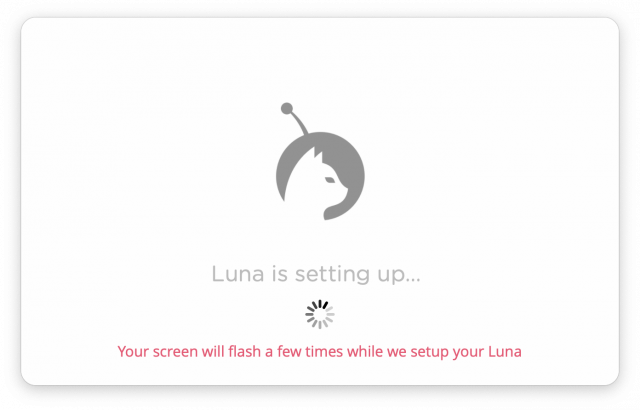 Automatic connections worked fine for me on some attempts, but not others for reasons I couldn’t discern.

If an automatic connection does not work, you can employ a workaround called Wi-Fi Manual Connect. Click this button in the apps on both Macs. You should then see a code appear in the app on the primary Mac. The same code also will show up in the app on the secondary Mac, but with a few digits omitted—fill those in, and you should be good to go.

Once connected, you can use the Luna Display app on the primary Mac to tweak how the two Macs function in relation to each other, with the secondary Mac on the left or right. Clicking Custom dumps you into the standard Display settings for additional adjustments. 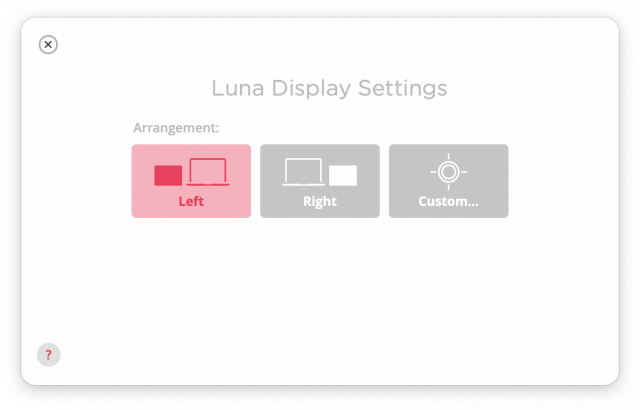 With the MacBook Air in hand, I tested Mac-to-Mac Mode in three scenarios. Two of these involved the USB-C Luna Display dongle, and the third tapped the Mini DisplayPort version.

My goal here was to use my LG UltraFine display as the main screen for my Mac mini, with the MacBook Air off to one side as a secondary monitor, much as I would when using an iPad with the Luna Display.

This dual-screen setup worked well, with my Mac mini’s extended Desktop displaying on the MacBook Air with its full 1400-by-900-pixel resolution, and with good responsiveness.

The Mac-to-Mac Mode connection was impressively hard to break. I repeatedly closed and reopened the MacBook Air’s lid, with the Luna Display hookup continuing as if nothing had occurred. Putting the Mac mini to sleep did break the Mac-to-Mac Mode link, as you’d expect, but the Luna apps were waiting upon reawakening and automatically reinitiated the connection.

What if you have a Mac mini as a “headless” Mac—tucked away in a closet, perhaps? Luna Display’s Mac-to-Mac Mode lets you use a Mac laptop as a wirelessly connected monitor whenever you need it. AstroHQ has already proposed using an iPad with a Mac mini in this way.

In my case, Mac-to-Mac Mode on my wife’s MacBook Air enabled me to use my Mac mini while on the comfy sofa far from my office.

To test this single-display solution, I had to physically disconnect my LG screen from the Mac mini so that the MacBook Air would become the Mac mini’s sole display.

But first, a few macOS tweaks were required for this to function properly:

Everything worked reasonably well. Responsiveness was a bit slow but not bad. All input devices—the Mac mini’s Magic Mouse, Magic Trackpad, and Magic Keyboard, along with the MacBook Air’s built-in laptop keyboard and trackpad—behaved as expected. Dependability was decent; closing and reopening the MacBook Air’s lid had no effect on the Mac-to-Mac Mode link.

Because the MacBook Air and Mac mini connected over Wi-Fi, I was able to work anywhere within the range of my Wi-Fi network. In fact, I wrote much of this article on the MacBook Air in my first-floor living room, wrapped in a warm blanket on the sofa (because winter is nigh here in Minnesota), with the Mac mini running on the second floor in my home office. Sweet.

Unfortunately, I could not get this setup to work reliably. The Mac-to-Mac Mode connection crashed repeatedly. At times I could move the cursor between displays, but at other times, it refused to move.

It was a mess, as AstroHQ’s Matt Ronge acknowledged when I got in touch. He said his team was scrambling to fix bugs that interfered with the use of the Mini DisplayPort model of the Luna for Mac-to-Mac Mode connections. I plan to check back on this and leave any updates in a comment below.

For now, though, although I can recommend the USB-C version of the Luna Display dongle with Mac-to-Mac Mode, if your main Mac only has a Mini DisplayPort or Thunderbolt 2 port, hold off for a bit.

Dusting off my Luna dongles, months after writing about how they enable iPads as secondary Mac monitors, allowed me to revisit that scenario — and compare it to Apple’s equivalent, the Catalina Sidecar feature I reviewed just last month.

Because of Sidecar’s oddities, the Luna approach came as a relief in some ways. Of particular note: Using macOS with touch on an iPad screen is better with AstroHQ’s implementation. You can reach out and do just about anything with a fingertip — which seems sort of obvious, right? Ah, but as I detailed in my Sidecar review, fingertip interaction will work for some things on the iPad screen, and not others. In many cases, an Apple Pencil is required. Ugh.

So, for those who can afford the purchase of the Luna hardware, this is the best way to turn an iPad into a Mac display. Because Sidecar is free, though, most people will end up using that — which is fine since it works reasonably well, the touch issues aside, and should get better over time.

Using one Mac as a secondary display for another Mac will not have occurred to most users because, until now, this has been possible only under narrow circumstances involving specific iMac models. And, as Adam Engst notes, Apple’s Target Display Mode doesn’t work very well.

AstroHQ, scrambling to remain relevant after being Sherlocked, has therefore done the Mac world a huge favor with its Mac-to-Mac Mode. Though not yet fully baked, especially on the DisplayPort end, Luna hardware and its related software are a godsend for those with extra Macs ready to be repurposed as second displays.

This, of course, comes at a cost—the Luna dongles don’t come cheap, so every prospective user will have to weigh whether this is money well spent.