Motherboard has obtained copies of the IRP contract, which was a task in and of itself since shops must sign a non-disclosure agreement before even seeing the contract. Despite that, several repair shops agreed to go on the record. 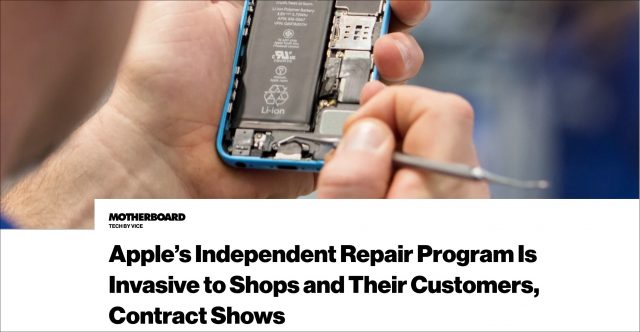 Here are some of the more onerous details of the IRP:

Manhattan MacBook repairman Louis Rossmann, who initially supported the program, later recanted, calling it a “useless PR stunt” with terms that make it difficult for repair shops to turn a profit or keep parts in stock. Many industry observers worry that Apple isn’t serious about the IRP but is instead using it to thwart Right to Repair legislation by convincing politicians that it renders such laws unnecessary.

But not all repair shops are opposed to the IRP. Justin Carroll, the owner of the Virginia-based FruitFixed, told Motherboard, “I don’t think that’s as bad or a massive negative [speaking of the audits]. That’s something for me I would welcome because I know everything in our house we’re selling is fine and above board.”