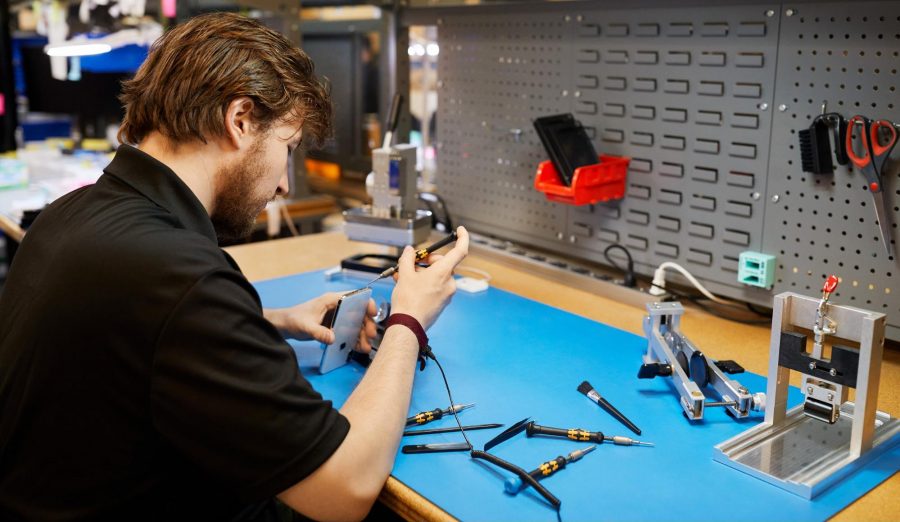 The company has announced the Independent Repair Program, which will provide independent repair businesses, regardless of size, with the same genuine parts, tools, training, repair manuals, and diagnostics for iPhone repairs as it gives to Apple Authorized Service Providers. After piloting the program with 20 repair business in North America, Europe, and Asia, Apple is launching the program in the United States with plans to expand it to other countries.

There’s no cost for repair shops to join the Independent Repair Program, although the application information notes that applicants must be established businesses in a commercially zoned area, and all repairs using genuine iPhone parts must be performed by an Apple-certified technician.

While Apple deserves praise for finally acknowledging that it needs the help of independent repair businesses to meet the burgeoning repair needs of the hundreds of millions of iPhone users, there are some caveats and questions to keep in mind.

We believe the safest and most reliable repair is one handled by a trained technician using genuine parts that have been properly engineered and rigorously tested.

It’s undoubtedly true that repairs are best made with properly engineered parts, but Apple’s rhetoric rings a bit hollow given that fires caused by Apple-genuine batteries caused the 2015 MacBook Pro to be banned by various airlines (see “Stop Using Your 2015 15-inch MacBook Pro,” 20 June 2019). (As an aside, read the comments on “FAA Warns Airlines about 2015 15-inch MacBook Pros,” 14 August 2019, for suggestions on what paperwork to bring with you if you need to travel with either an unaffected or repaired MacBook Pro.)

Regardless, the Independent Repair Program is absolutely a positive move for Apple, and we applaud the company for making it. But we remain somewhat troubled by Apple’s paternalistic tone and the implications implicit in it. Apple’s Williams said, “When a repair is needed, a customer should have confidence the repair is done right.”

That’s also true, but it’s none of Apple’s business unless Apple is doing the repair. If I choose to take my iPhone to an independent repair shop that is clearly not affiliated with Apple, the relationship is between that repair shop and me, and Apple is not a party to it. If I’m unhappy with the repair, it would be unreasonable to assume it was Apple’s fault in any way, and I’d take it up with the repair shop.

It’s just like with cars. Most of the time, I choose to have my Nissan Leaf serviced by a local independent mechanic who I trust more than the nearby dealer. I don’t need or want Nissan involved with general maintenance like having the brakes done. But for concerns related to the fact that it’s an electric car, I’d be happy to take it to the Nissan dealer so they could bring their proprietary tools and expertise to bear. (Happily, being an electric car with many fewer moving parts and fewer fluids, it hasn’t suffered from as many issues as the gas cars we’ve owned.)