When it comes to operating system updates from Apple these days, it’s one for all and all for one. The company’s mobile operating systems—particularly iPadOS 13.4—received the most attention this time around (see “iOS 13.4 and iPadOS 13.4: Trackpad Support, iCloud Drive Folder Sharing, and More,” 24 March 2020), but Apple also updated all of its other operating systems. macOS 10.15.4 Catalina is the most notable, but you’ll probably want to install the other three sooner.

The macOS 10.15.4 Catalina update weighs in at 2.97 GB via Software Update, or you can download the 4.73 GB combo update. Its primary new feature is the ecosystem support for iCloud Drive folder sharing, and there are a few other helpful changes.

On the downside, 10.15.4’s release notes say nothing about resolving the data loss bugs in Mail (“Beware Mail Data Loss in Catalina,” 11 October 2019). That’s not to say that Apple didn’t fix those bugs, but we’ll have to wait for the community to test.

Assuming that other reasons you’ve held off upgrading to Catalina have been resolved, such as working around 32-bit apps that will no longer launch, getting essential apps upgraded, and so on, iCloud Drive folder sharing might be the reason to make the jump.

That’s because Dropbox has become increasingly hard to use without paying $9.99 per month, mostly thanks to its year-old limit of three devices for free accounts (see “Dropbox Limits Free Accounts to Three Devices,” 14 March 2019). Could iCloud Drive folder sharing replace Dropbox, at least for Apple-centric users? We’ll be putting it through its paces.

To share an iCloud Drive folder in 10.15.4, Control-click it in the Finder and choose Share > Add People. macOS’s odd modal dialog appears, letting you set who can access the folder (invitees or anyone with the link) and what permissions they have (view only or make changes). Select a sharing mechanism at the top and enter the name of the person with whom you want to share, click Share, and you’re done. 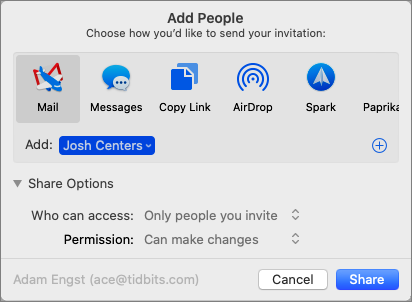 Let us know how it works for you.

Other Features and Fixes

None of the other changes in 10.15.4 are compelling, though some may be welcome.

Of course, there are always bug fixes and tweaks that fewer users may notice or appreciate.

Unfortunately, since the dialogs give only the developers’ names, not the names of their apps, it’s difficult to know who I might contact. A Google search revealed that Ludovic Leger is the dev lead on TripMode, a useful utility I recommend for managing bandwidth use while away from high-speed networks; see “TripMode Prevents Unwanted Internet Data Usage on a Tethered Mac” (22 July 2015). I’m still not sure who Steven Yan is, or what app of his I might be using. That’s not a problem now, but it might be in a few months once the beta of whatever macOS version follows Catalina comes out.

So is this it? Is macOS 10.15.4 the release you’ve been waiting for to upgrade from 10.14 Mojave? It’s too soon to say for sure, but after a few days to make sure the release doesn’t leave unsightly stains in regular usage, I personally plan to upgrade my main Mac.

I can do that with less worry than many people because I don’t use Mail much. If you do, continue to hold off—Michael Tsai’s followers are still reporting problems with dragged messages disappearing. Apart from that, though, Catalina feels as baked as it’s going to get. There may be another one or two updates to fix minor bugs or security holes, but nothing more. Come WWDC, Apple will undoubtedly be talking up yet another version of macOS, and we’ll be right back on the train again.

Once you’ve updated to iOS 13.4 on your iPhone, you can get to watchOS 6.2 in Watch > General > Software Update. The update introduces in-app purchases for Apple Watch apps and fixes a bug that paused music playback when switching from Wi-Fi to Bluetooth connectivity. There’s seldom any reason to put off watchOS updates.

Apple Watch users in Chile, New Zealand, and Turkey can now get the ECG app on the Apple Watch Series 4 and later, and all watchOS 6 users in those countries can get irregular heart rhythm notifications.

As usual, the tvOS 13.4 update notes are sparse, promising only “general performance and stability improvements.” The update includes 18 security updates, largely shared with the other operating systems.

If automatic updates aren’t on, you can update your Apple TV HD or Apple TV 4K by going to Settings > System > Software Updates. We just let ours update automatically when they get around to it. Let us know if you notice any changes.

The 1.63 GB iOS 13.4 update for the HomePod has minimal release notes despite its large download size: “general improvements for stability and quality.”

To update the HomePod manually (it should update itself soon enough), open the Home app, touch and hold the HomePod’s tile, tap the gear icon to bring up HomePod settings, and then tap Install. We see no reason not to install this update soon.