Apple has released iOS 13.4 and iPadOS 13.4 with more significant features than Apple usually bakes into mid-cycle releases. You can install the updates, which weigh in at 983.7 MB on an iPhone 11 Pro and 3.13 GB on a 10.5-inch iPad Pro, in Settings > General > Software Update, using the Finder in macOS 10.15 Catalina, or using iTunes in earlier versions of macOS. Let’s look at what’s new.

If you have a Magic Trackpad 2, you can get a preview of what using the iPad Pro’s Magic Keyboard trackpad will be like. First, you need to unpair the Magic Trackpad 2 from your Mac. Go to System Preferences > Bluetooth and click the X next to Magic Trackpad.

On your iPad, go to Settings > Bluetooth and tap the trackpad under Other Devices. If it doesn’t show up, try turning the Magic Trackpad 2 off and back on again. Tap Pair when prompted.

Once it’s active, move your fingers around the trackpad, and you’ll notice a small gray circle, which acts as the pointer. When you move over a clickable object (though not clickable items in Safari), the pointer disappears and the object gains a light gray highlight to indicate that it’s selected. A press on the trackpad acts just like a tap with your finger.

To adjust trackpad settings, go to Settings > General > Trackpad, where you can enable or disable natural scrolling, tap to click, two-finger secondary click, and adjust the tracking speed. (Searching for “trackpad” in Settings doesn’t reveal this screen, which is ridiculous—every string of text in the Settings app should automatically be searchable. Bad Apple!) 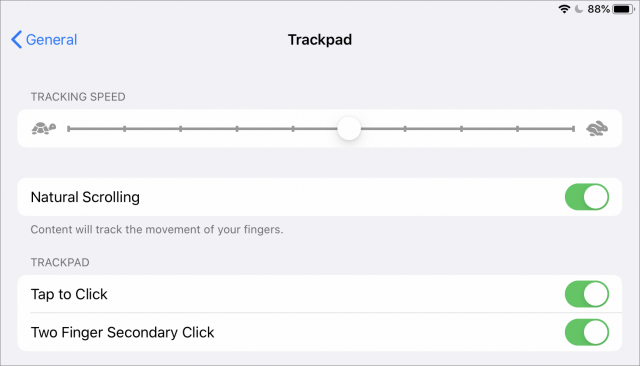 iPadOS lets you use the typical iPad screen gestures on the trackpad and adds others based on standard macOS gestures. The duplication is probably for the best, given that some people will be translating iPad screen gestures and others will be accustomed to Mac trackpad gestures. Again, for comprehensive coverage of all the gestures, see “The iPad Gets Full Trackpad and Mouse Support” (28 March 2020). 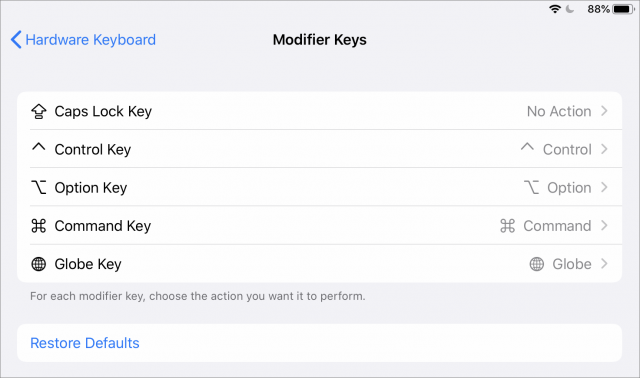 It also provides a new Full Keyboard Access feature in Settings > Accessibility > Keyboards, which lets you use a hardware keyboard to control your iPad if you can press keys more easily than swiping on a screen or trackpad.

Apple initially promised iCloud Drive folder sharing for iOS 13.0 and iPadOS 13.0, but a data corruption bug during the beta period forced the company to delay it. The feature is finally here for both operating systems and hopefully no longer corrupts data. Much like Dropbox, it lets you share a folder with other iCloud users, allowing everyone in the share group to add, remove, edit, and view files in that folder. As far as we can tell from initial testing, it works only within the Apple ecosystem.

To try iCloud Drive folder sharing, open the Files app and tap and hold a folder until the contextual menu appears. Tap Share and then from the activity sheet, tap Add People. Under Share Options, you can choose who to share the folder with and what they can do with it.

iOS 13.4 also addresses a bug that made iCloud Drive seem available in the iWork apps even when you weren’t logged in.

One of the biggest annoyances about iOS 13 was how Apple hid most of the iOS 12 Mail toolbar buttons behind what used to be the reply icon, such that tapping in the spot where reply had previously been deleted or archived the message. Now there are “always-visible controls to delete, move, reply to, or compose a message in conversation view.” Why this fix took so long escapes us. (Weirdly, the iPadOS version of Mail puts the Delete, Move, and Compose buttons at the top, and the More Actions curved arrow at the bottom. It doesn’t change in iPadOS 13.4.)

Tucked away in the release notes is a potentially major change for the App Store: developers can now offer a universal purchase for apps. In theory, a single purchase could get you the same app and in-app purchases on your iPhone, iPad, Mac, and Apple TV. Whether developers will take advantage of this feature remains to be seen, as it devalues the effort put into porting apps to Apple’s many platforms, regardless of how easy Apple supposedly makes it. But it will undoubtedly reduce confusion for customers.

Other Fixes and Improvements

When should you update? With iOS 13.4, our take is that it’s welcome but not immediately essential unless you want to dive right in with testing iCloud Drive folder sharing. Well, OK, Mail’s return to a sensible toolbar is also compelling. Nonetheless, if you’re running iOS 13 in general, you should update within a week or so to take advantage of the new features and the security updates.

iPadOS may be another story. Its Magic Keyboard with trackpad won’t be available for a few months, but if you want to try the trackpad support with one of Apple’s trackpads or a trackpad from another company, you’ll want to update right away. The iCloud Drive folder sharing and Mail improvements, not to mention the option to disable the Caps Lock key on a Smart Keyboard, are also appreciated. So give it a few days to make sure Apple doesn’t rush out an important bug fix and then update. Of course, if the new features don’t float your boat, chill out for a week or two before installing.