Motorized standing desks are increasingly popular in offices because they let computer users alternate between sitting and standing positions at the touch of a button.

But vanishingly few people outfit their home offices with such bulky, pricey furniture. So what should you do if you’re missing your standing desk or are just looking to get out of your uncomfortable chair?

Affordable, space-saving alternatives for the home exist. I’ve covered a number of these in TidBITS in the past (see “Cheaper Alternatives to Expensive Standing Desks,” 8 April 2016). Today, I’ll tell you about two products that largely replicate the benefits of office-style standing desks but take up less room and are easier on the pocketbook.

For those working within a limited budget and space constraints, consider a wooden mini-desk, which is a table-top frame with slots for height-adjustable shelves.

I reviewed one of these for TidBITS a few years ago in the previously linked article. The Readydesk sits atop a desk or table and provides a pair of spacious shelves for an iMac or desktop displays (upper shelf) and input devices (lower shelf). Though not without shortcomings (like the requirement that you wear flannel while working at it), the Readydesk is reasonably priced at $149. 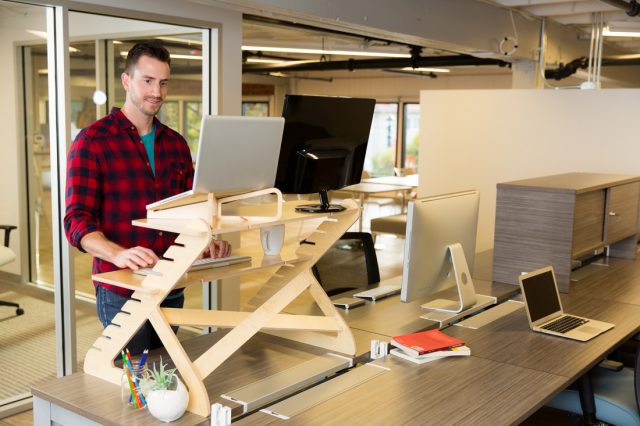 Readydesk’s Allstand, a smaller, simpler version, provides a single shelf and a more compact profile that makes it easier to move around your home. At $49.99, it’s even more affordable. 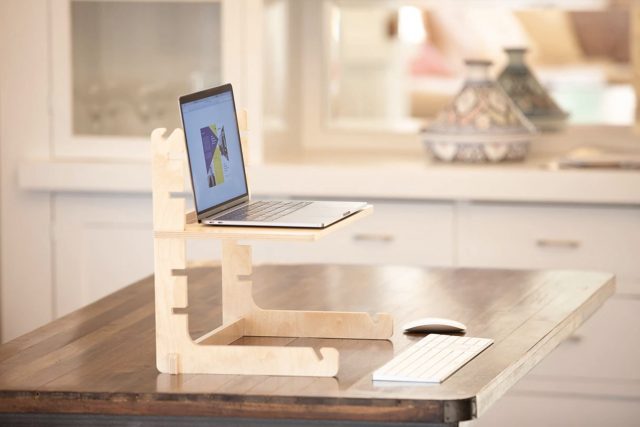 The Allstand’s interlocking components assemble quickly. Two L-shaped uprights lock into place at the bottom with a crossbeam. The L parts offer seven sets of notches into which the shelf can slide at varying heights and angles. A small, elongated part snaps to the back of the top of the shelf to serve as a backstop. 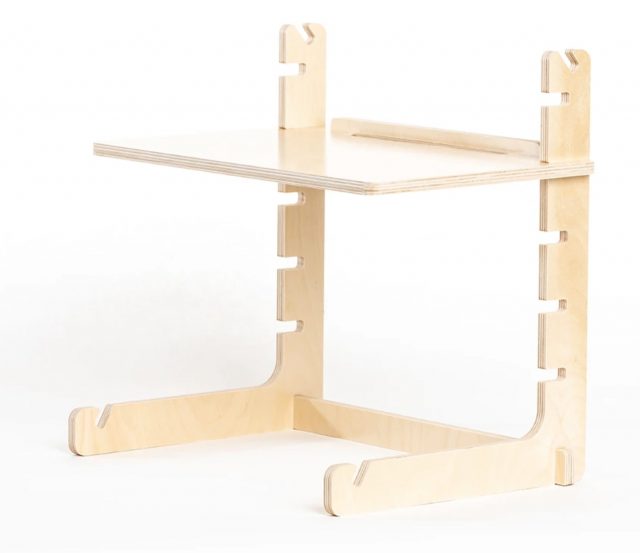 The Allstand has two distinct modes:

These modes open up a number of possibilities. Let’s say you want to work on your laptop. In desk mode, the Allstand’s shelf is roomy enough for a 13-inch MacBook Air or Pro, but not quite large enough for a 16-inch MacBook Pro. Likewise, you can work on an iPad in a keyboard case (such as Apple’s latest entry, see “Magic Keyboard for iPad Pro Arrives Early,” 15 April 2020). Regardless of the device, insufficient extra space exists for a standalone keyboard, mouse, or trackpad.

Thanks to those five horizontal slot sets, you can work while standing or sitting. Whichever you choose, try to position the shelf so the laptop’s screen is as close to level with your eyes as possible. The surface on which the Allstand sits should be at a height that lets you use standalone input devices with your elbows at a roughly 90º angle and your forearms parallel to the surface.

Those using iOS devices on the Allstand have another option. You can position an iPad in portrait orientation in a shallow slot at the back of the shelf. The iPad mini or any iPhone also fits in landscape orientation. Thanks to iPadOS 13.4’s newly acquired support for input devices (see “The iPad Gets Full Trackpad and Mouse Support,” 28 March 2020), you can then separate the iPad (on the shelf) from input devices like Apple’s Magic Trackpad 2 and Magic Keyboard 2 (on the supporting surface).

Of course, an iPad with a Smart Keyboard would also fit on the shelf, but as with laptops, such a setup suffers from the poor ergonomics forced by having the keyboard close to the screen—there’s simply no way to avoid having to look down while still being able to reach the keyboard easily.

The Allstand’s easel mode gives you two additional positions. Place the shelf in the lower of the two angled slot sets, and you can work directly on the iPad—sketch with an Apple Pencil, for instance—or indirectly, using a keyboard and trackpad on the table in front of you. 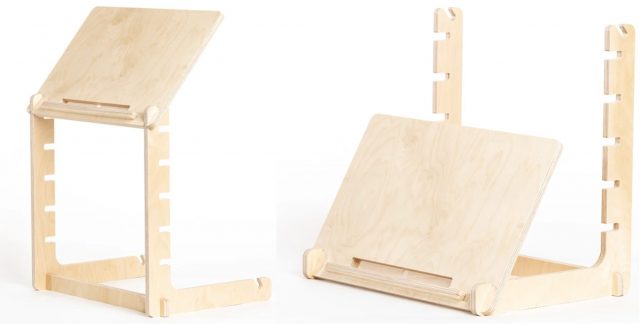 With the shelf in the top angled slot set, you create an elevated viewing platform for an iPad (or another item, such as a cookbook). This approach doesn’t lend itself as well to productivity since there is no convenient place for input devices, but it’s handy to interact with an iPad via finger taps or voice commands while you’re standing up.

I’ve written about a rugged class of desk converters from the likes of Vari (formerly VariDesk) and Ergotron. Such contraptions sit atop a table or a desk and largely replicate the functionality of a full standing desk.

The converters I have reviewed for TidBITS (see “Ergotron WorkFit-TX Sit-Stand Desk Converter Works Well but Is Costly,” 27 November 2018, and “Ergotron Lets Mac Users Stand and Deliver,” 5 December 2014) work well but tend to be bulky and expensive.

Ergotron recently tried to target consumers with a lower-cost line of converters—seemingly with poor results since the company’s Web site now lists these products as discontinued. It turns out that Ergotron’s best converter for consumers is one of its business products. The WorkFit-TS Compact Desk Converter shares key attributes with other converters: 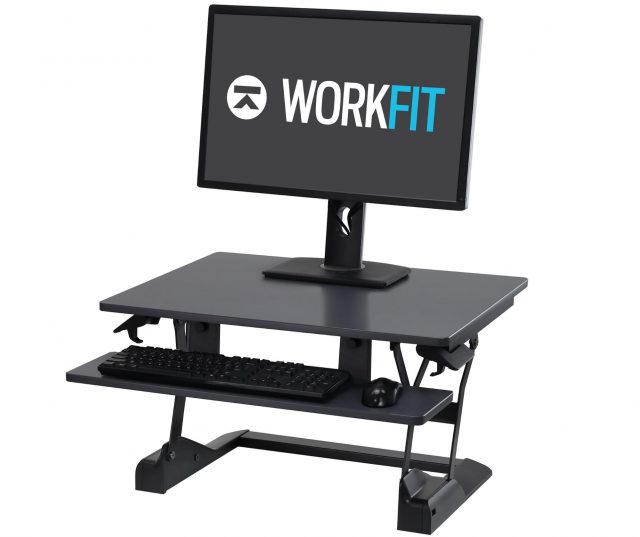 Happily, the WorkFit-TS takes up a lot less space, and, at $299, it’s priced more appropriately for home users. You can readily remove the lower tray if you just want to use the main surface, which has room for an iMac or desktop display along with your input devices, or you can use the deck as a laptop platform. 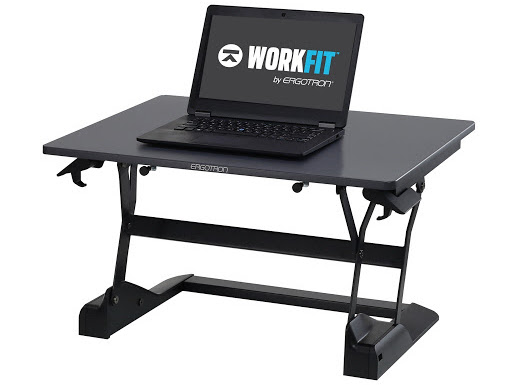 The WorkFit-TS isn’t perfect. The input-device tray is cramped, and you can’t adjust its height like the tray on the WorkFit-TX. And, though smaller than other converters, the WorkFit-TS still weighs 38.5 pounds (17.5 kg), making it challenging to move around.

The lightweight, compact Allstand is handy when I want my workspace to migrate around the house with me as I work on a MacBook or an iPad, or take my productivity onto the porch now that the Minnesota winter is on the wane.

Meanwhile, I’ve set up the roomier WorkFit-TS in my home office with a MacBook and an iPad side by side for Sidecar-powered sessions. I’ve also experimented with a laptop hooked up to a desktop display—there’s plenty of space for both, assuming the monitor is on the smaller side.

Whether you’re looking for something that can move around the house with you or anchor your home office, the Allstand and the WorkFit-TS make working at a standing desk a reality for legions of temporary telecommuters, without breaking the bank.