The iPad arguably came into its own as a laptop alternative in 2015 when Apple released its first-ever keyboard cover, the Smart Keyboard for the first-generation iPad Pro (see “iPad Pro with Smart Keyboard and Apple Pencil Announced,” 9 September 2015). That setup, with the iPad and the keyboard connecting physically rather than through often-flaky Bluetooth, instantly invited comparisons to other tablet-like computers such as Microsoft’s Surface PCs.

That changed last month with the release of iPadOS 13.4 (see “The iPad Gets Full Trackpad and Mouse Support,” 28 March 2020), which added support for trackpads and mice. In conjunction with the feature, Apple announced a third-generation keyboard cover with a built-in trackpad (see “Magic Keyboard for iPad Pro Arrives Early,” 15 April 2020).

Although it has little in common with its Bluetooth wireless namesake, the Magic Keyboard for use with 11- and 12.9-inch versions of the iPad Pro, is Apple’s slickest, most sophisticated keyboard cover to date. In addition to a trackpad, it has:

This setup, though different in design and execution from a traditional notebook, comes closer than any past iPad keyboard cover to replicating a laptop’s comfort and ease of use. It had better, given that the aggregate cost of an iPad Pro and Magic Keyboard is greater than a new MacBook Air. 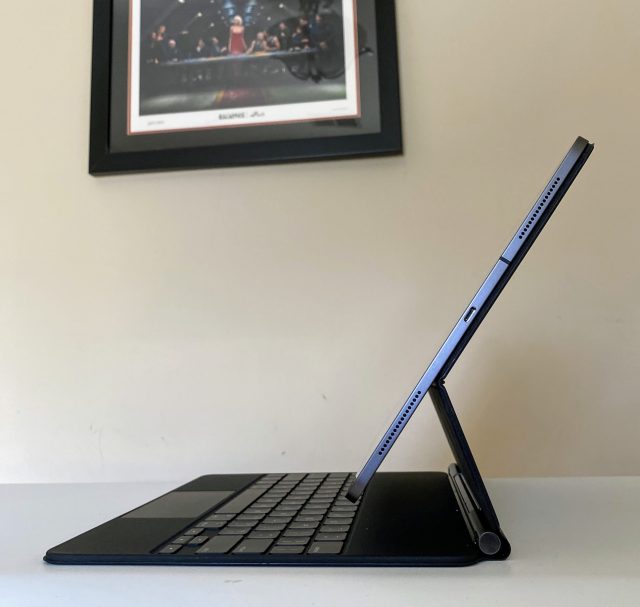 For iPad keyboard covers and cases going forward, trackpads will be increasingly common, but it’s not a given that all trackpads will work equally reliably with iPadOS 13.4. In his review of the Brydge Pro+ keyboard case, Jason Snell of Six Colors summed it up with “The trackpad on the Pro+ isn’t remotely close to Apple’s trackpads in class.”

Apple, on the other hand, has mostly nailed the Magic Keyboard’s trackpad, which dependably replicates the gestures that worked so well for me with Apple’s external Magic Trackpad 2.

The Magic Keyboard trackpad’s only minor problem is its size. It’s much smaller than the Magic Trackpad 2, making it a bit awkward to execute certain gestures—such as pinching inward with all five fingers to open the App Switcher. It is doable, but it takes a bit of practice.

Unlike the current MacBook trackpads and the Magic Trackpad 2, which have no physical button and provide haptic feedback when you click, the Magic Keyboard’s trackpad has a mechanical-clicking action. It feels just right, but it’s optional since you can use tap-to-click as you would on the Mac. Or, if you like, disable tap-to-click and stick with the physical clicks.

The fabric-sheathed keyboards on Apple’s older iPad covers have their detractors, but I have happily pounded on those Chiclet-like keys over the years. At first, the revamped keyboard on the Magic Keyboard felt wrong to me.

After more than a week with the new keyboard, however, I’m starting to like it. The scissor keys have a bit more travel than the old ones and are easier on the fingertips. They jiggle a bit, but not enough to be annoying. They have a pleasing sound that doesn’t seem to be louder or quieter than the old one, just different—think soprano to the older keyboard’s baritone.

Backlighting is a major plus—that’s a feature I have longed for over the years as I worked in badly lit places. The lighting is adjustable, but tweaking it is a pain. There’s no physical button for it, so you have to navigate to Settings > General > Keyboard > Hardware Keyboard to find a brightness slider. This is a minor issue, but Apple could have skirted it with an easier-to-find Control Center slider. 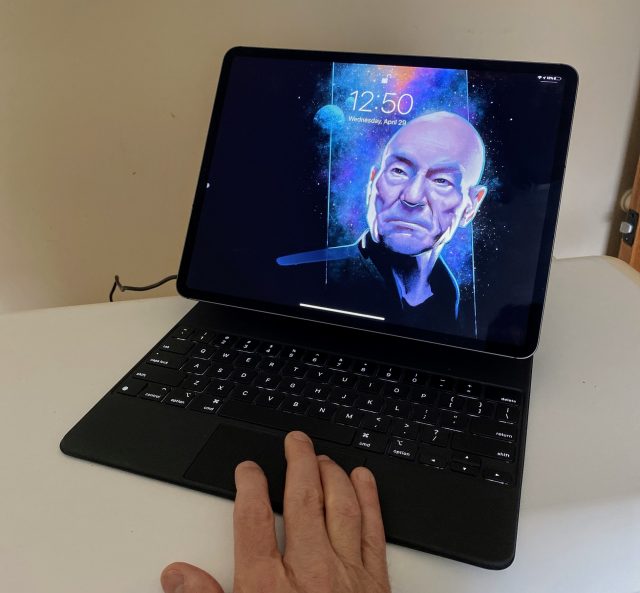 Some have complained about the absence of a function-key row—but Apple’s older keyboard covers also lack one, and that has never bothered me much. There’s simply no room for those keys. The lack of an Escape key seems to be a particular point of contention, which puzzles me a bit since it doesn’t play much of a role in iPadOS.

The Magic Keyboard is comparable to the Smart Keyboard Folio in its basic design. The tablet is sheathed front and back in a rubbery gray material. Some seem to dislike the material, but I appreciate that it’s protective and easy to wipe clean. When you open the keyboard cover, the rear sheathing becomes a support, while three magnetic contacts on the iPad back align with pegs inside the cover—an arrangement known as a Smart Connector—to render the keyboard operational. 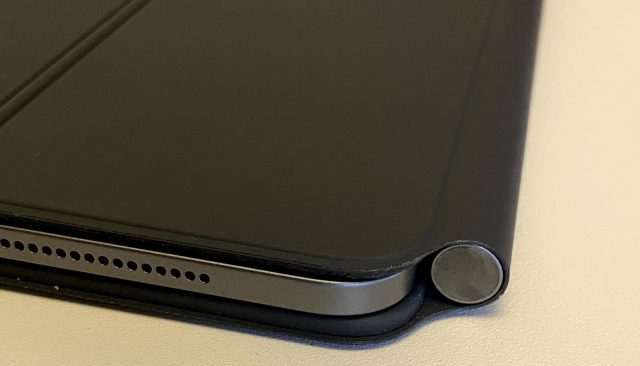 But the two designs diverge in how the iPad is held upright. The Smart Keyboard Folio has a pair of grooves in its keyboard base into which the iPad’s bottom edge fits snugly and securely to enable two viewing angles.

On the Magic Keyboard, the iPad’s bottom edge doesn’t touch anything. It’s suspended in the air as the iPad adheres magnetically to the cover’s rear sheathing, which is thicker and stiffer to support the iPad’s weight. As a result, it can seem like it’s floating. 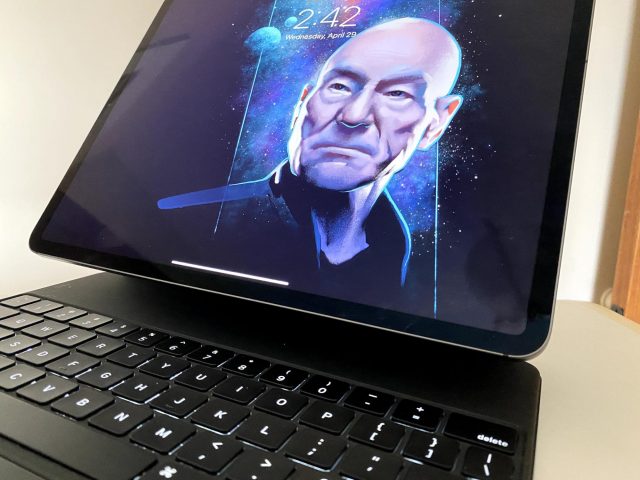 The rear sheathing of the Magic Keyboard is creased, similar to that of the Smart Keyboard Folio. But, in this case, the crease enables incremental tilting so the iPad’s display can be viewed at a range of angles—from 90º to 130º. That’s fine, but I would have liked to be able to tilt the iPad backward a bit more. 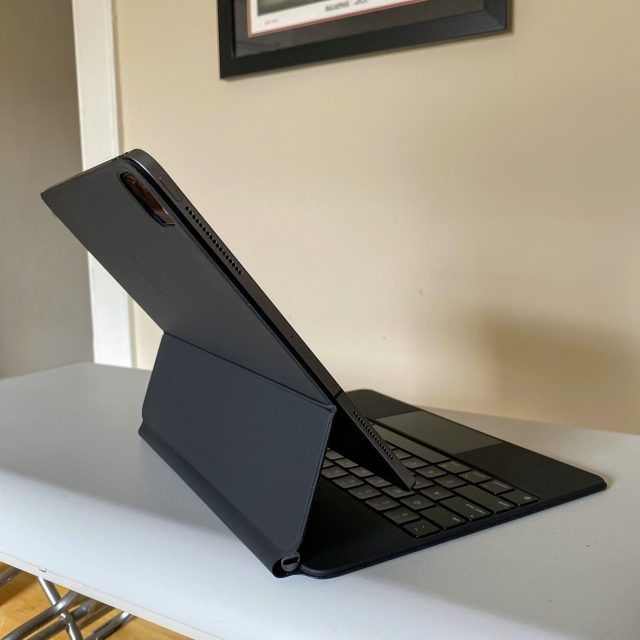 If you want to use the iPad on its own, give it a tug to separate it from its perch. With the Smart Keyboard Folio, you could fold the keyboard portion to the back and out of the way, but that isn’t possible with the Magic Keyboard.

Older Apple keyboard covers needed no dedicated hinges. The keypad portion attached like a flap and folded over the iPad screen when not in use. But the Magic Keyboard, because it has to do the hard work of holding the iPad aloft, needs beefier construction that includes a good hinge.

The Magic Keyboard’s hinge is a rugged metal tube with tension roughly comparable to that of a MacBook. It opens to the 90º position with a satisfying snap, and the creased sheathing then engages as you tilt the iPad backward to an optimal viewing angle. 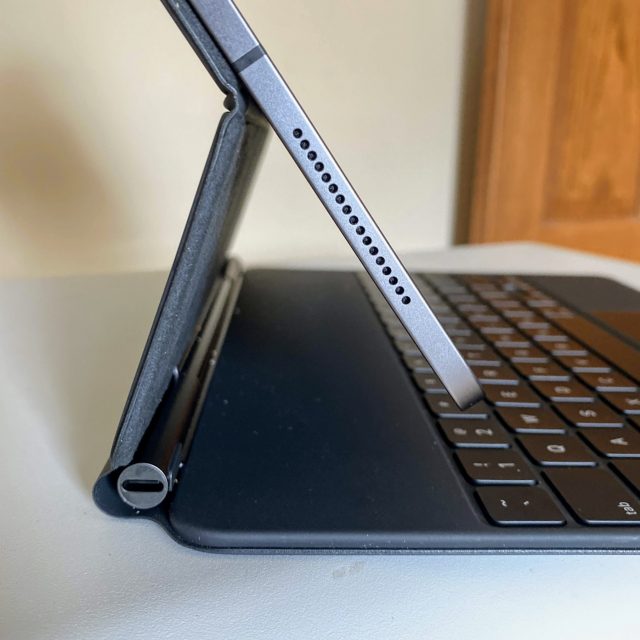 The left-hand hinge tip incorporates a USB-C port. You can use it solely for charging the iPad—more slowly than the iPad’s own port—not to move data. This second port is handy, however, since it frees up the iPad Pro’s USB-C port for plugging in storage devices or connecting to displays without resorting to multi-port docks or dongles. It’s a relief to charge the iPad inconspicuously, too, with no cable awkwardly hanging off the side. 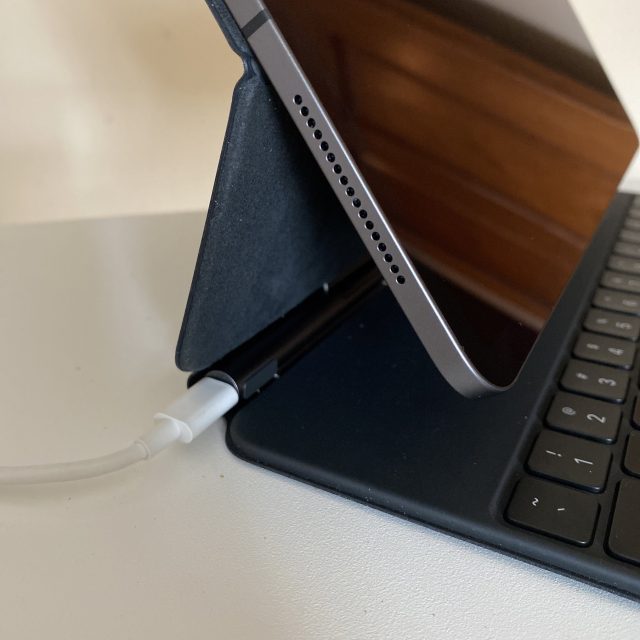 A week with the Magic Keyboard gave me a renewed appreciation for the Smart Keyboard Folio, which Apple continues to sell alongside the newer accessory. It’s now clear to me that the Magic Keyboard is not a replacement but a complement, with the two accessories fitting distinctly different roles.

The Smart Keyboard Folio will appeal to those who crave a lightweight, inconspicuous iPad keyboard cover that provides a high degree of mobility and intimacy, with its keyboard right up against the display and taking up no more space than necessary. Those covered keys are famously impervious to grit, grime, and spills, as well.

The bulkier, heavier Magic Keyboard seems to me as much a desktop dock and typing station as a mobile keyboard and screen protector. In fact, I sometimes felt disinclined to remove my Magic Keyboard review unit from my office desk, instead snapping the iPad off the accessory. Losing access to the trackpad was a minor sacrifice for when I read or watch video in bed, where a tablet is much easier to handle than a laptop.

In terms of laptop-style “lappability,” however, the Magic Keyboard and the Smart Keyboard Folio are comparable. The keyboard decks on both provide flat, smooth, sturdy bottoms that feel good on the lap, and make for comfortable, stable typing while sitting. The Magic Keyboard tips backward ever so slightly, but not enough to feel unstable, and its trackpad is a definite plus when it’s on my lap. Both keyboard setups are more lappable than the old Smart Keyboard, which lacks a stiff, sturdy bottom and therefore feels far more unstable. A regular laptop marginally wins the lappability contest because of its lower center of gravity, but the Magic Keyboard and the Smart Keyboard Folio are not far behind.

Cost is an issue, too. The Smart Keyboard Folio versions for the 11-inch and 12.9-inch iPad Pro are $159 and $199, respectively. That’s $120 and $150 less than the corresponding models of the Magic Keyboard. That said, those on tight budgets probably aren’t buying a pricey iPad Pro over less expensive iPad models.

For people with the money to spare—and a strong desire for iPad Pro trackpad input at a desk, on the couch, and on the go—the Magic Keyboard is a welcome addition despite its bulk and weight. It is unquestionably Apple’s best iPad keyboard cover to date and comes the closest to replicating a laptop’s comfort and ease of use.

Comments About With the Trackpad-Equipped Magic Keyboard, You Can Use an iPad Pro Like a Laptop