Time for a new iMac! For me, I mean. My 27-inch iMac with Retina 5K display from 2014 has been limping along since its internal SSD failed (see “Six Lessons Learned from Dealing with an iMac’s Dead SSD,” 27 April 2020). Although the Samsung T5 external SSD itself has been working fine once everything is up and running, the iMac starts up and shuts down slowly, Wi-Fi doesn’t become available for several minutes after startup, my Apple Watch works only sporadically for unlocking the Mac even though it always works for approving app authentication requests, and I’ve seen some kernel panics. It’s not dead, but it’s not a happy Mac.

So Apple’s announcement of a significant update to the 27-inch iMac with Retina 5K display comes at a welcome time. While there are no industrial design changes, it’s not a half-hearted speed bump update. Along with faster 10th-generation Intel processors, twice the memory capacity, newer AMD graphics chips, and larger SSD options, the new iMac boasts a 1080p FaceTime HD camera, better speakers, and a three-microphone array. Plus, for those afflicted with glare problems, a nano-texture glass option provides a matte finish. 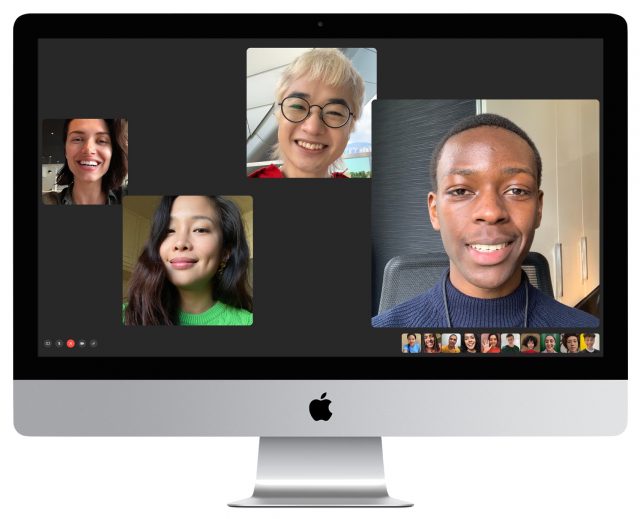 Simultaneously, Apple tweaked the configurations of the 21.5-inch iMac, finally removing the option for a performance-draining hard drive, and the iMac Pro, dropping the 8-core model and making the 10-core model the base config.

In terms of storage, Apple has dropped the Fusion Drive entirely from the 27-inch iMac. Slightly perturbingly, the company limits your storage options based on which model you choose. The low-end model is locked at 256 GB of storage, which isn’t very much. The mid-range model starts with 512 GB, which feels like a reasonable minimum these days, and lets you expand to 1 TB ($200) or 2 TB ($600). And the high-end model takes the iMac into new and eye-wateringly expensive territory, again starting at 512 GB and offering the same 1 TB and 2 TB upgrades, but then adding 4 TB ($1200) and 8 TB ($2400) options.

Like the iMac Pro, the 27-inch iMac now sports Apple’s T2 security chip, which provides on-the-fly data encryption for everything stored on the SSD and verifies that the operating system hasn’t been tampered with during boot. Of course, it also makes certain kinds of troubleshooting and hardware repair much more difficult or even impossible. In addition, the T2 chip features an image signal processor that promises to improve video and offers variable EQ for better audio. Speaking of which…

The Retina display also now supports Apple’s True Tone technology, which automatically adjusts the color temperature of the display to match the ambient lighting in the room. It’s relatively minor, but welcome.

Also welcome in this era of non-stop videoconferencing will be the 1080p FaceTime HD camera, backed by the T2 chip’s image signal processor. Although Apple doesn’t specify the resolution on the FaceTime HD camera used in previous models, I believe it was 720p. Previously, the iMac Pro was the only Mac with a 1080p webcam.

Resolution isn’t the entire story with video quality, and I’ll be curious to see how well the iMac’s new camera and image signal processor deal with low-light situations. We recently had two outdoor Zoom calls, one using a 10.5-inch iPad Pro’s 1080p front-facing camera and the other using a 2012 MacBook Air’s 720p FaceTime HD camera. The iPad Pro handled the light fading throughout the evening far better than the MacBook Air.

Apple says the iMac has higher-fidelity speakers, although it’s hard to know how much of that is better speaker hardware and how much comes from the T2 chip doing more processing on the audio output.

Previously, the iMac had just a single microphone, but it now boasts a three-mic array with a high signal-to-noise ratio and directional beamforming. And of course, thanks to the T2 chip, the new iMac has support for “Hey Siri.”

Ports remain almost the same with a 3.5 mm headphone jack, an SDXC card slot, four USB-A ports, two Thunderbolt 3 ports, a Gigabit Ethernet jack, and a Kensington lock slot. New in this update is a $100 option for 10 Gigabit Ethernet. 802.11ac Wi-Fi and Bluetooth 5.0 are standard.

As previously noted, it’s important to start with the appropriate model of the 27-inch iMac, depending on what options you might want.

These prices are the same as the iMac’s last revision, making the new models a generally good deal.

Apple’s online store shows quick delivery dates for the three stock configurations, but as soon as you make any configuration changes, those dates jump by about three weeks.

It’s impossible to know what variables will cause Apple to update certain Mac models with Intel chips instead of taking them to the new custom chips that the company is developing. However, the release of this iMac model does suggest that the first Mac with Apple silicon will be a laptop or a Mac mini. It wouldn’t make much sense to update the 27-inch iMac with 10th-generation Intel chips in August and revise it again with new Apple silicon within a few months.

I’ll be ordering one of these iMacs as soon as I can figure out the best combination of CPU and GPU for my needs. None of my work is performance-intensive, but I run many apps at once and hit RAM pretty hard. Typically, I buy a beefier model than is absolutely necessary because I expect a Mac to last for around 5 years—I got almost 6 years from my current iMac—but given the switch to Apple silicon, it will probably make sense to replace it sooner.

While I had planned to replace my 2012 MacBook Air with the new 2020 model, I shelved those plans when it became clear I wouldn’t be traveling in the foreseeable future. With luck, the first Mac with Apple silicon will be a laptop in the MacBook Air mode, letting me dip my toes into Apple’s new chips and get a snazzy new travel machine.

Although Apple didn’t update the 21.5-inch iMac in any way, the company made one small adjustment to its configuration that will save effort for consultants and heartache for consumers. That’s right, Apple has finally replaced the universally reviled 5400-rpm hard drive that came in the low-end 21.5-inch iMac with an SSD. No longer will consultants have to warn people not to buy it, and no longer will those who do be saddled with substandard performance.

This move makes SSDs standard across the 21.5-inch iMac line, and in fact, across the entire Mac line. That’s not to say that the Fusion Drive, which combines a 1 TB hard drive with a small 32 GB SSD, is entirely gone, but it’s now solely a no-fee alternative to the standard 256 GB SSD. I’m not a fan of the Fusion Drive either, because problems with either half render the entire thing unusable, and it’s difficult to replace (plus, see “iMac 1 TB Fusion Drives Have Smaller SSDs,” 7 August 2017). Stick with an internal SSD and add an external drive if you need more space. You’ll need one for backups anyway.

In an even less interesting change, Apple dropped the 8-core Intel Xeon W processor from the iMac Pro’s configurations, making the 10-core Xeon W the base-level processor. That means you get a little more performance for your money, but it’s sad that Apple hasn’t paid any other attention to the iMac Pro since its December 2017 launch. Its 14-core and 18-core configurations likely still provide more performance than the 27-inch iMac’s new 10-core configuration, but the gap is undoubtedly narrowing and may no longer be worth the extra several thousand dollars.

Comments About 27-inch iMac Receives Significant Update, Other iMacs Get a Nod