Several weeks ago, I upgraded from a 2014 27-inch iMac with Retina display to Apple’s new 2020 version of the same model (see “27-inch iMac Receives Significant Update, Other iMacs Get a Nod,” 4 August 2020). The new machine is great, although I have to admit that I don’t notice much of a performance improvement over the old one, despite it having a much beefier CPU. What I do notice is that all the flakiness I was experiencing has disappeared—it’s nice to be able to restart without it being a production (see “Six Lessons Learned from Dealing with an iMac’s Dead SSD,” 27 April 2020).

During the setup of the new iMac, I had no issues migrating all my data from the Samsung T5 SSD that I had been using to boot the old iMac, but I was somewhat surprised at how much additional work was necessary afterward. The promise implicit in Setup Assistant’s migration is that you won’t have to reconfigure everything and can just get back to work.

It’s a nice idea, but in reality, there are numerous areas where Setup Assistant simply doesn’t—and probably can’t—save you from additional work. All of these relate to how the underlying identity of the Mac has changed, even if its name and the names of all the drives in play remain the same.

So if you’re planning to buy a new Mac, here are some of the tasks that may be left for you after migration. I’m sure this is nowhere near a comprehensive list, so be sure to let us know in the comments about other things you’ve run into when moving to a new Mac.

If you want to use your old Time Machine backup with your new Mac—and there’s no inherent reason why you shouldn’t—be aware that macOS will prompt you to inherit the backup history. There’s no problem in doing this, although it’s possible that Time Machine will back up a lot more files from the new Mac and thus fill up its drive. In that case, the only downside to restarting your Time Machine backup (remove the drive from Time Machine, erase it in Disk Utility, and select it in Time Machine again) is losing access to older versions of changed files.

It’s worth noting that exclusions you set on the old Mac should also come over. I’ve heard some people worry that you might need to remove and re-add excluded drives, but I’ve seen no issues with that. Check your Time Machine exclusions in System Preferences > Time Machine > Options.

You might think that SuperDuper and Carbon Copy Cloner could pick up where they left off on the old Mac if you’ve kept the name of the startup drive for the new Mac the same as it was on the old one. Unfortunately, the names are irrelevant, as Carbon Copy Cloner developer Mike Bombich was kind enough to explain on TidBITS Talk.

There are no CCC nor macOS bugs here, it’s normal and correct for CCC to indicate that the source volume is not available when you migrate your data to a new Mac. CCC isn’t making any assumptions here either–indeed, the old Mac’s “Macintosh HD” volume is not available on the new Mac, the new Mac has its own “Macintosh HD” volume. CCC doesn’t rely on the volume name alone for identification, it uses the volume’s universally unique identifier.

The practical upshot of this fact is that you need to reselect your source volume before scheduled backups can start working properly again. It’s trivial to do so in both apps; just make sure you do it right away to ensure that your bootable duplicate stays up to date.

Time Machine isn’t the only backup system that needs to reconnect backup states. Unless you pay for additional machines, Backblaze supports only a single computer at a time, so you need to tell it that you’ve switched to a new machine. Doing so also prevents the re-upload of files that have already been backed up.

The process of getting Backblaze to inherit the backup state of an old Mac is fussy, but Backblaze provides clear instructions. To summarize:

While you’re in the Backblaze preference pane, make sure the appropriate hard drives are selected in the Select Hard Drives to Backup list. 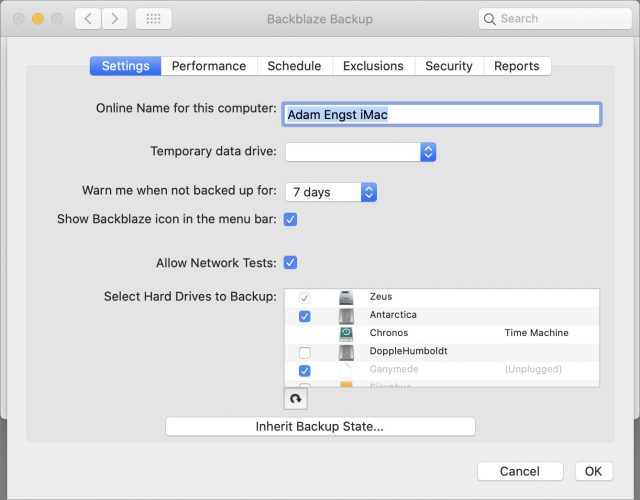 I don’t really remember exactly what happened with iCloud, but I know that I’ve entered my Apple ID password numerous times on this new Mac. Whenever you boot from a new drive, iCloud gets concerned that there could be a security problem, and it asks you to sign in again. Sometimes you’re asked subsequently to provide your account’s login password or even the passcode to one of your other Apple devices. Glenn Fleishman explained this a year ago in “Why Apple Asks for Your Passcode or Password with a New Login (and Why It’s Safe)” (26 September 2019).

I can’t predict exactly what you’ll see here, but don’t be perturbed if macOS asks you for your Apple ID and password several times before everything settles down.

As you know, macOS 10.15 Catalina increases the number of ways in which apps have to ask for permission to access some of your data (the Desktop and Documents folders, plus things like Calendar and Contacts data), certain hardware subsystems (most notably the camera and microphone), and various capabilities (automation, screen recording, location awareness).

When I look in System Preferences > Security & Privacy > Privacy on the new iMac, it’s evident that Setup Assistant moved over many of the app requests and my assent to them. I see plenty of apps that I haven’t opened in months, some with permission granted, others with permission denied, as it should be.

However, there are also a few instances of apps that have requested permission to something on the old Mac that did not migrate to the new one. For instance, in the Input Monitoring category, the old Mac shows that I granted access to the video production app OBS. On the new Mac, however, OBS doesn’t even appear in that category, and when I launched it for the first time, it asked for that access.

To summarize 15 minutes of back-and-forth checking, all I can say is that some apps may ask for privacy permissions again after you migrate to a new Mac. I can’t identify any rhyme or reason for why this might be, and there are so many permission request dialogs in macOS as it stands (expect even more in macOS 11 Big Sur) that you probably won’t notice a few more.

Perhaps the most surprising setting that doesn’t transfer in a migration from an old Mac to a new one is text message forwarding in Messages. It took me several weeks to realize I wasn’t getting SMS text messages forwarded to Messages on my new iMac. I don’t get that many of them, and I usually deal with the few I get on the iPhone. But when one showed up on my iPhone that was best responded to from the iMac, it took me a few minutes to figure out how to get it to appear in Messages on the Mac.

The trick is that text message forwarding is controlled from your iPhone, not from Messages on the Mac. Go to Settings > Messages > Text Message Forwarding and toggle the switch for your new Mac—it was off by default, and I’ve enabled it in the left-hand screenshot below. 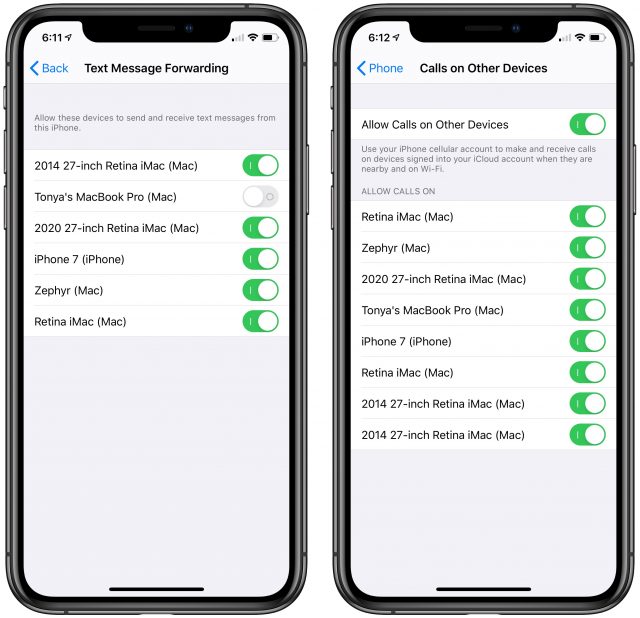 The capability to make and receive calls on other devices via Wi-Fi Calling may also fall into this category. I say “may” because although you have to select on which devices to allow calls in Settings > Phone > Calls on Other Devices, all of mine were already enabled, as you can see in the right-hand screenshot above, including the new iMac. (My best guess for why some devices in the lists are duplicated is that they reflect multiple Mac accounts logged into the same iCloud account.)

I generally keep Wi-Fi Calling disabled in FaceTime on my Macs because I always have my iPhone and Apple Watch with me. I don’t need more Apple devices ringing at me when a call—and it’s almost always a spam call these days—comes in.

I believe Dropbox, Google Drive, and other cloud-based file syncing services will need you to log in again after migrating them to a new Mac. That makes perfect sense because they need to add the new Mac to the collection of devices to which all changes are synced.

For Dropbox, the request to login is easy and obvious, but there may be a catch. If you have a free Dropbox account, you can connect only three devices (see “Dropbox Limits Free Accounts to Three Devices,” 14 March 2019). If you had more devices linked to your account before Dropbox instituted that limitation, they can remain linked, but you can’t add any new ones. So, when you get a new Mac, you may have to remove multiple other devices to connect the new Mac to your Dropbox account. I say “may” again because both my old iMac and my new one seem to have connected to my Dropbox account, bumping me to four connected devices, which seems like it shouldn’t be possible. My iPhone certainly doesn’t think it can connect, as you can see below. 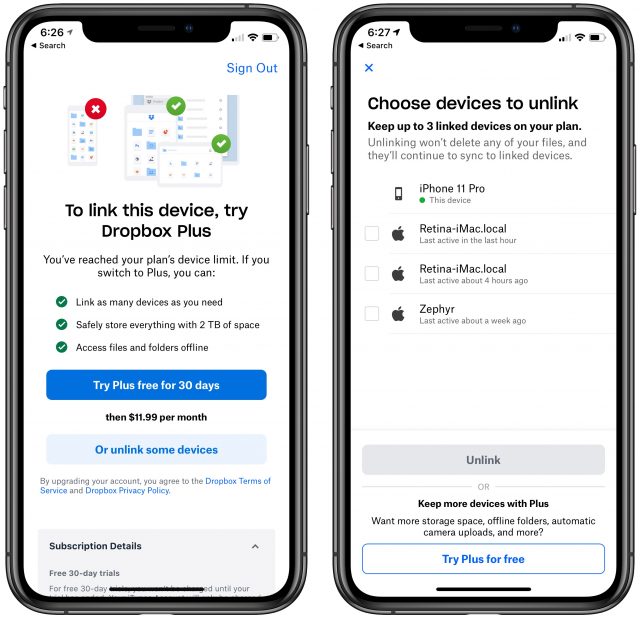 Google Drive—as managed locally by the awkwardly named Backup and Sync from Google app—is in a slightly different situation. In my experience, it tends to get confused about what Finder folder you’ve specified for a local version of everything that’s in your Google Drive account. So along with needing to log in again, you may need to select that folder again, and it’s not inconceivable that you’ll end up with some sync conflicts between files.

I’m sure that there are plenty of other apps and services that tie themselves to a particular Mac and refuse to work after being migrated to a new one until you enable some setting, log into an account, or juggle your set of allowed devices. If you’ve run into any of these, let us know in the comments so people reading this can go into a Mac migration aware of what might need to be done after the fact.

Comments About Moving to a New Mac: What’s Left to Do After Migration?