With Apple warning that the next iPhone would be delayed by a few weeks (see “Apple Q3 2020 Breaks Records While the World Burns, Next iPhone to Be Fashionably Late,” 30 July 2020), it wasn’t surprising that the company’s “Time Flies” product announcement event focused on two other product lines that are often relegated to second-fiddle status.

In addition to new iPads (dissected by Josh Centers in “Apple Redesigns iPad Air, Updates Base-Model iPad” 15 September 2020), Apple unveiled a pair of Apple Watch models. These include the flagship Apple Watch Series 6 with new, advanced capabilities—including a blood oxygen sensor—along with a lower-cost Apple Watch SE that has some of the new features found in the Series 6.

The announcements also included a couple of cool new watch bands and a Family Setup system that will make it possible to give an Apple Watch to children and seniors who don’t have their own iPhones.

Under the hood, the Apple Watch Series 6 sports a new dual-core S6 processor to launch apps 20% faster while maintaining 18-hour battery life. Apple says the S6 is based on the A13 Bionic in the iPhone 11. In addition, the Apple Watch Series 6 has new Ultra Wideband antennas for short-range wireless connectivity intended to enable new uses, such as using the watch as a digital car key. 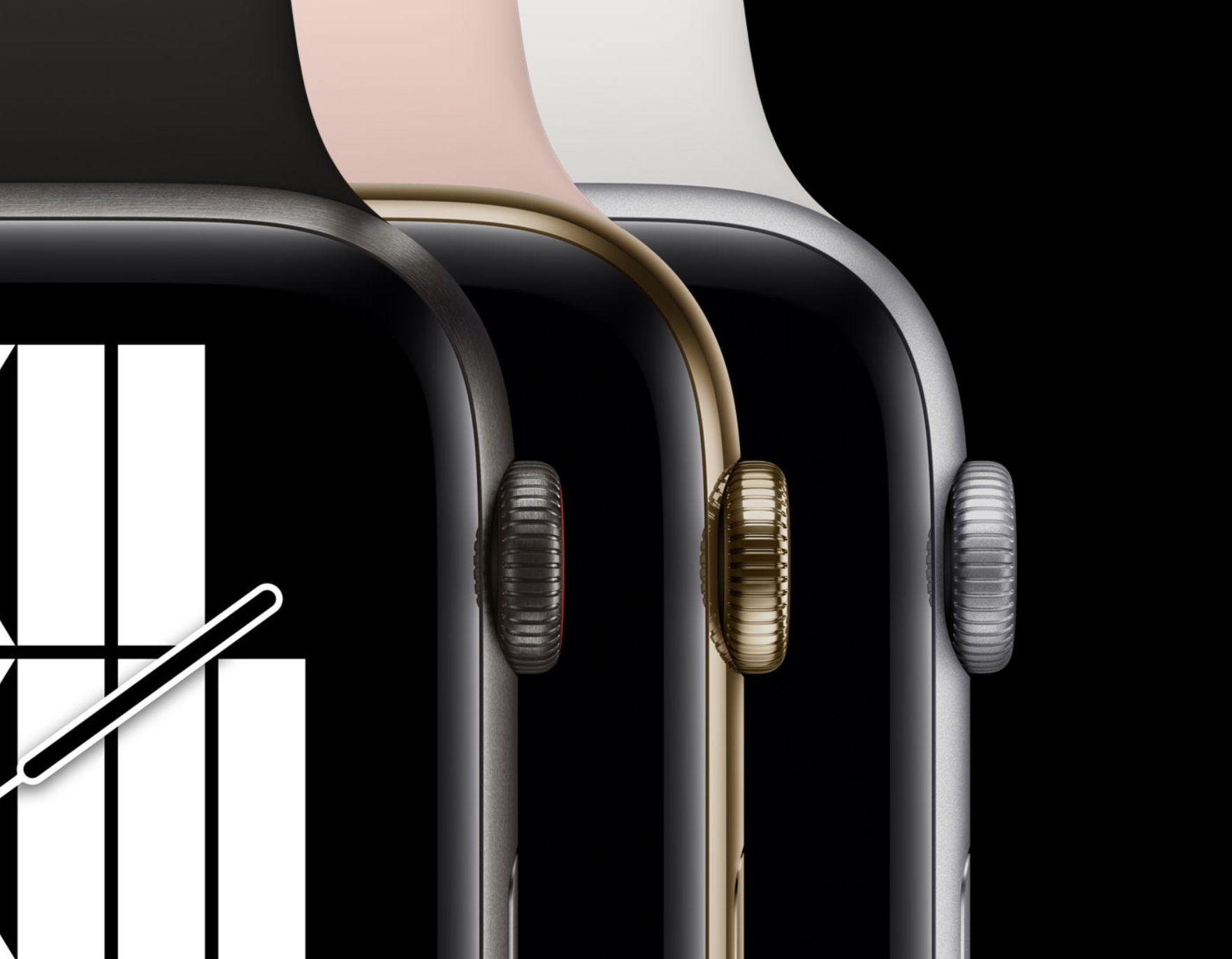 Also new in the Apple Watch Series 6 is an enhanced Always-On Retina display that is 2.5 times brighter in sunlight when your wrist is down. In that wrist position, you can access Notification Center and Control Center, tap complications, and change faces without having to wake the screen.

The Series 6 also features an always-on altimeter display that taps a new, power-efficient barometric altimeter along with details gleaned from nearby GPS and Wi-Fi networks for on-the-fly elevation detection. It is accurate to about a foot, and you can display it as a watch face complication or as a workout metric. 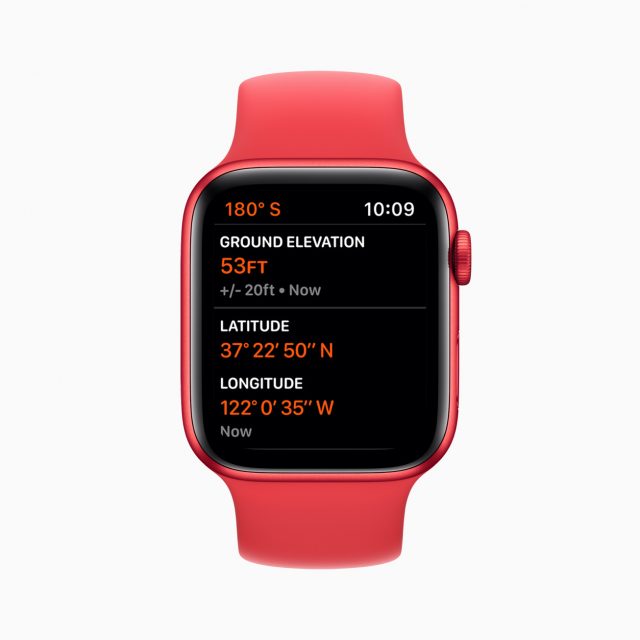 In terms of colors, the aluminum Apple Watch Series 6 line boasts a new blue shade along with the existing silver, space gray, and gold options. In addition, an eye-catching (PRODUCT)RED watch with a matching red band is now available. The stainless steel line now includes a graphite color—what Apple describes as “a rich gray-black hue with a striking high-shine finish”—and silver and an “updated” classic yellow gold color. Titanium models also are available in a couple of colors, including space black. 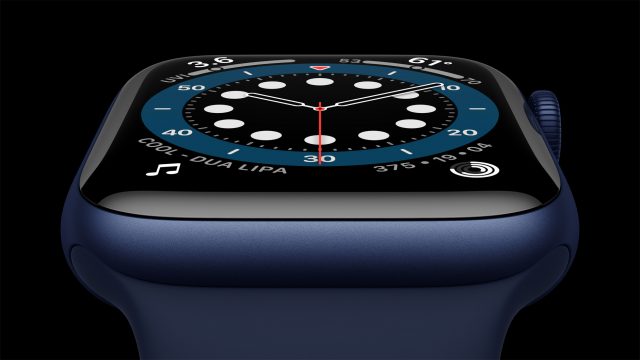 Pulse oximetry, the technical term for measuring the percentage of oxygen being carried by red blood cells from the lungs to the rest of the body, has become more mainstream lately because of the COVID-19 pandemic. Poorly oxygenated blood is a possible symptom of COVID-19, which has triggered a run on low-cost sensors that clip over fingertips.

Apple’s addition of the blood oxygen sensor and companion app to the Apple Watch Series 6 is a timely enhancement. However, we won’t know how its accuracy and sensitivity compare to traditional medical instruments until the public gets its hands on it.

Apple says the sensor on the watch’s back crystal incorporates four clusters of green, red, and infrared LEDs, along with four photodiodes, to improve accuracy and compensate for natural variations in the skin. The readings are achieved by measuring light reflected back from blood to determine its color. 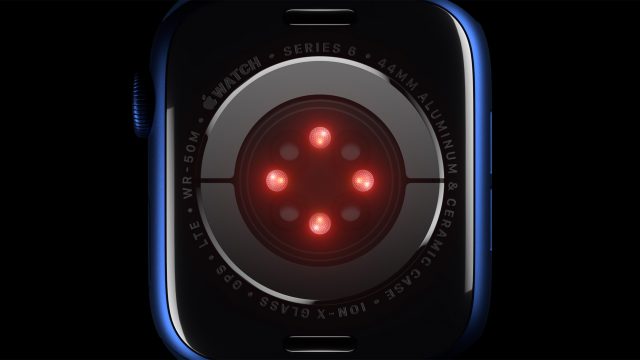 The watch’s Blood Oxygen app uses a custom algorithm that can detect blood oxygen saturation between 70% and 100%. You can initiate a reading anytime, though you have to hold still for 15 seconds. Background measurements also occur when you’re inactive, like during sleep. All such data is added to the Health app, and you can track blood oxygen trends over time. 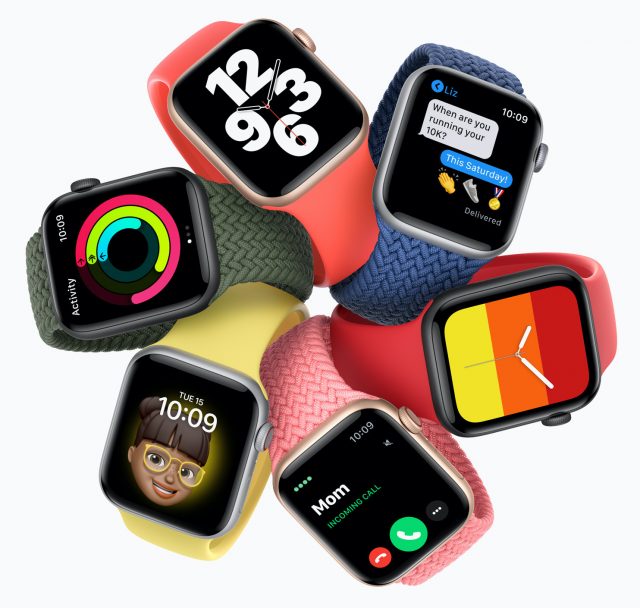 The Apple Watch SE is essentially a rebranded Apple Watch Series 5—minus the ECG—but otherwise with welcome improvements. The Apple Watch SE has the same accelerometer, gyroscope, and always-on altimeter as the Series 6. It has the same Retina display as the Series 6, but without the Always-On capability. Other features include fall detection, noise monitoring, Emergency SOS, the latest speaker and microphone array, and a Digital Crown with haptic feedback.

The aluminum Apple Watch SE is available in gold, silver, and space gray case finishes, and it’s compatible with all Apple Watch bands (including the new ones described below).

Apple, always out to delight watch band collectors—you know who you are—has debuted several new band styles. Along with minor variations on its Hermès and Nike Sport band lines, the company has unveiled two band styles with features not seen before:

Since the initial release of the Apple Watch, it and the iPhone have worked in pairs. Apple is now altering that formula with a new feature called Family Setup, largely intended for parents of young children and those who serve as caregivers for the elderly. 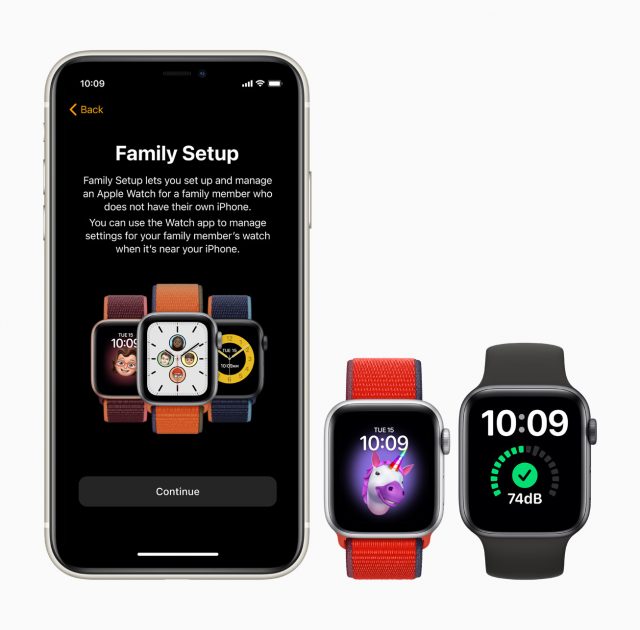 The idea behind Family Setup is to let kids or seniors have their own watches even though they might not have iPhones. Instead, the watches are all linked to a single iPhone that’s operated by the person supervising this arrangement.

That responsible party can track the other users’ locations, determine with whom they can communicate, enforce a restricted Schooltime mode that keeps kids focused on their schoolwork, and so on.

The watch-only users have their own phone numbers through separate cellular plans, and control their own Apple IDs and all the features those enable.

Family Setup works only with cellular models of Apple Watch Series 4 or later, and it will initially work only in the United States and 11 other countries.

Apple also highlighted new tools in watchOS 7 for developers to create specialized watch faces for surfers, photographers, medical professionals, and the like. The complication to provide information on the “golden hour” for photographers garnered the most interest in the SlackBITS group watching the event together. There must not be many surfers in the TidBITS crowd. 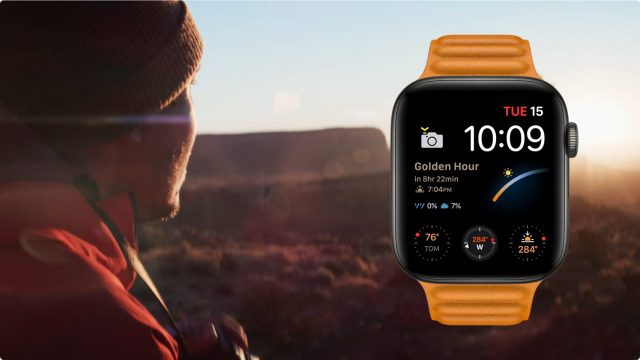 These Apple Watch announcements may have seemed anticlimactic to those who have been following the industry speculation because almost everything—including the Apple Watch Series 6 and the Apple Watch SE—had been expected. The event had only minor surprises, most notably the Family Setup feature.

As usual, Apple incrementally advanced the Apple Watch state of the art while smartly revealing one hot new feature, the Blood Oxygen app and sensor, to get tongues wagging in a COVID-19 context.

It’s somewhat odd that Apple has kept the increasingly elderly Apple Watch Series 3 around, although it’s obviously to provide a low-cost entry point into the Apple Watch ecosystem. But why the Series 3, when Family Setup works only with the Series 4 and later? (In part, that may be because you can’t buy a cellular-capable Series 3 anymore.) Families that want to outfit their children or seniors will have to go for an Apple Watch SE instead.