Apple’s next product announcement event will be held on 13 October 2020 at 10 AM PDT from the company’s Apple Park headquarters. As with the last event, Apple lets you add it to your calendar with one click. We anticipate that it will once again be filmed in advance, which lends both high production values and a relentless pace to the announcements. 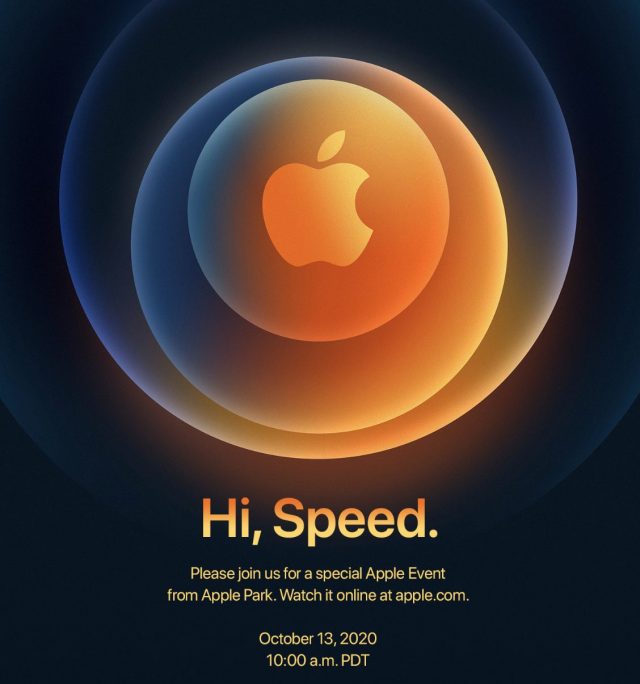 iPhones were completely absent from last month’s “Time Flies” event, which focused on the Apple Watch Series 6 and new iPads (see “Apple Unveils Apple Watch Series 6 and Apple Watch SE” and “Apple Redesigns iPad Air, Updates Base-Model iPad” 15 September 2020). We don’t have a crystal ball, but we’d bet money on at least one new iPhone debuting at this event. Given the “Hi, Speed” tagline, it’s possible the next iPhone will be compatible with high-speed 5G cellular networks.

Since Apple also promised Macs built on high-performance Apple silicon before the end of 2020, the tagline might suggest an announcement or update on that front as well (see “Macs Make the Move to ARM with Apple Silicon,” 22 June 2020).

Updates to the HomePod and AirPods lineups could also be in the cards. Apple recently dropped Bose, Sonos, and other competing audio makers from its store, fueling rumors that it is set to unveil a smaller HomePod and full-size Apple-branded headphones.

Other, less likely possibilities include updates to the aging Apple TV lineup and the iPad Pro, which looks increasingly long in the tooth compared to the less expensive, but similarly capable iPad Air.

Who knows what we’ll see! But you can find out with us by joining us in the #events channel of our SlackBITS group. We’ve been chatting with our readers during the events for a few years now, and it’s always a good time. To join the group, go to slackbits.herokuapp.com, enter your email address, and agree to the code of conduct. You’ll receive an invitation in email right away.