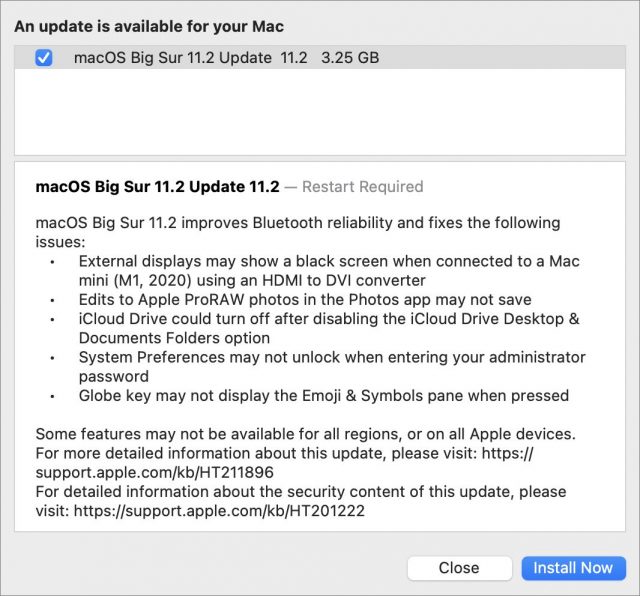 If those bugs don’t seem earth-shattering, that’s because the focus of the macOS 11.2 update seems to have been on security, with 43 security fixes. Two of the vulnerabilities—the same ones addressed in last week’s updates to Apple’s other operating systems—may have been actively exploited in the wild. However, no mention was made of a recent vulnerability discovered in the sudo Unix utility.

The macOS 11.2 update advertises itself as being a 3.25 GB download on both an Intel-based iMac and an M1-based MacBook Air, although the latter Mac’s download window inexplicably reports 4.18 GB instead. You can only install the update using Software Update; Apple appears to have stopped releasing standalone downloads for Big Sur updates.

Given the severity of the exploited security vulnerabilities, we recommend installing macOS 11.2 soon if you’re already running macOS 11.1. Wait a few days to make sure the community doesn’t find unanticipated problems, and then update.

However, for those who haven’t yet updated from a previous version of macOS, we recommend waiting a few more weeks to determine if macOS 11.2 will give fence-sitters sufficient confidence to make the jump to Big Sur.