Over the weekend, MacRumors broke the news that Apple had quietly added a “while supplies last” tagline to its iMac Pro product page. Apple has since confirmed to MacRumors that it is phasing out the iMac Pro. 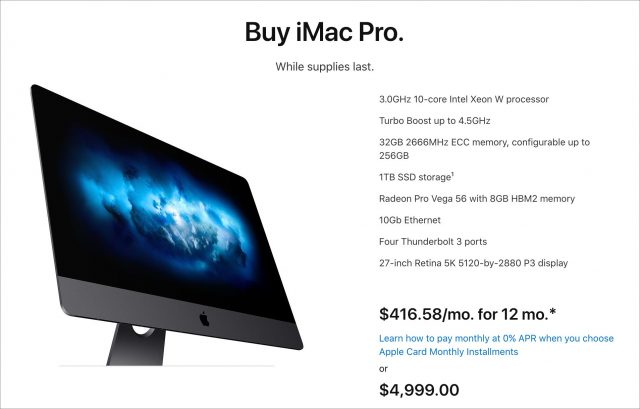 Apple first introduced the iMac Pro in 2017 as a stopgap in the lull between the 2013 Mac Pro and the 2019 Mac Pro (see “Apple Releases the iMac Pro,” 15 December 2017). However, other than resetting the core model from an 8-core processor to a 10-core processor in 2020, the iMac Pro languished for over three years without any updates from Apple.

The iMac Pro had a few things working against it. Along with a hefty price tag that started at $4999, the iMac Pro suffered from a lack of expandability and repairability, both key to professional users. Apple also didn’t support it well. When one of Linus Sebastian’s employees broke an iMac Pro, Apple refused to fix it. Linus eventually recruited independent repairman Louis Rossman to help fix it.

When Apple rolled out the redesigned Mac Pro in December 2019 for only $1000 more than the iMac Pro, there was little reason for professionals to opt for the iMac Pro instead (see “2019 Mac Pro and Pro Display XDR: Big Iron for Big Bucks,” 10 December 2019). The Mac Pro was both a much more powerful machine and had the expandability and repairability pros want, even if Apple’s support hasn’t improved much (see “Apple’s Mac Pro Support Reportedly Lacking,” 14 March 2020).

However, the release of Apple’s M1 processor was the true death knell for the iMac Pro. The M1 offers such a massive leap in performance over Intel processors that the base-model MacBook Pro beats even the Mac Pro in single-core benchmarks and gives it a run for its money in multi-core tests. And that’s a chip Apple tweaked for power efficiency for its low-end Macs, not one designed for maximum performance.

We expect Apple to start releasing significantly faster successors to the M1 for professional-level desktop Macs within the next year. It’s not inconceivable that an Apple silicon-powered iMac Pro could return, but given Apple’s lack of enthusiasm in the past, it seems more likely that the company will focus on the iMac and the Mac Pro.