Apart from watchOS 8 and iPad-specific (see “iPadOS 15 Improves Multitasking, Adds iPhone Features,” 7 June 2021) aspects of iPadOS 15, nearly everything Apple discussed during the WWDC keynote was spread across multiple operating systems. Worries that Apple would deprecate macOS in favor of iOS have proven unfounded, but the company is clearly spreading features across as many of its operating systems as possible. More so than ever before, Apple is emphasizing the power of buying into the overall Apple ecosystem. It may be a walled garden, but it’s awfully pleasant inside.

As such, it doesn’t make much sense to write an article about what’s new in iOS 15 or even macOS 12 Monterey (yes, that’s the name). Instead, we’re focusing on a word that kept cropping up as we were watching Apple’s recorded WWDC keynote in SlackBITS with numerous other TidBITS readers. “Finally!”

A grid view in FaceTime, AirPlay to the Mac, multiple timers on the Apple Watch—here we’ll look at the top ten features that we’ve wanted for years. We won’t belabor the point, but after every feature listed below, join us in saying, “It’s about time!” (And yes, there may have been an expletive before “time” while we were brainstorming the article.)

That brainstorming call? It took place in Zoom because Zoom is fast and easy, and it just works. FaceTime has long been weak in the videoconferencing space (see “Videoconferencing Options in the Age of Pandemic,” 2 April 2020), but Apple may be turning FaceTime into a contender with these features, which are commonplace in other videoconferencing apps:

If someone you know forgets their Apple ID password, there isn’t much you can do to help at this point, apart from walking them through the account recovery process. However, once the 2021 versions of Apple’s operating systems come out, people can designate one or more people as an Account Recovery Contact. Once someone has listed you as an Account Recovery Contact, if they lose access to their account, you’ll be able to help them reset their password and regain access to their account. Many of us are already pondering which elderly relatives need to enable this feature once it’s available.

Apple also took this feature to the next level, allowing you to designate people as Legacy Contacts. Then, in the event of your death, those people can access your account and personal information. Back when we were running Take Control Books, Joe Kissell wrote Take Control of Your Digital Legacy to cover issues like this (see “Aunt Agatha Ponders Her Digital Legacy,” 30 January 2017), and more recently, we explained “How to Request Access to a Deceased Family Member’s Apple Accounts” (17 June 2020). Having had to help a friend access her late husband’s account recently, we strongly recommend that everyone designate several Legacy Contacts as soon as possible. 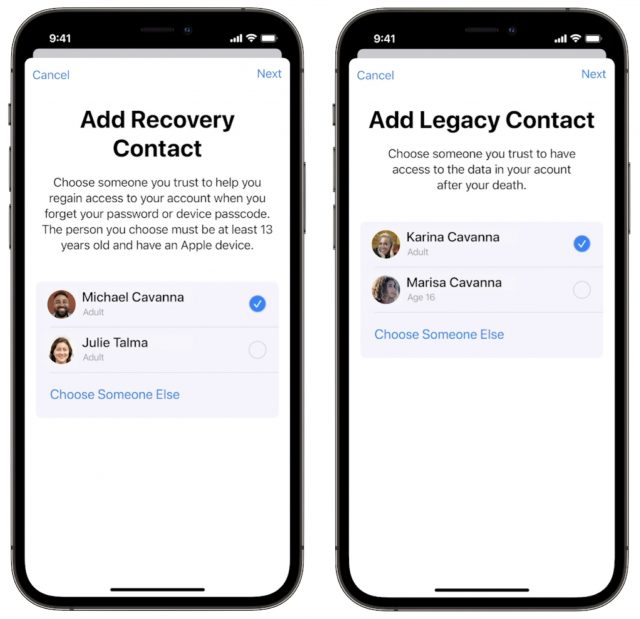 AirPlay Audio and Video to Macs

For nearly a decade, it has bothered us that you couldn’t send audio or video to a Mac using AirPlay. That’s changing in macOS 12 Monterey, with support for sending content to a Mac from an iPhone, iPad, or another Mac. Macs will also function as AirPlay 2 speakers, allowing you to use one as a secondary speaker for multi-room audio. 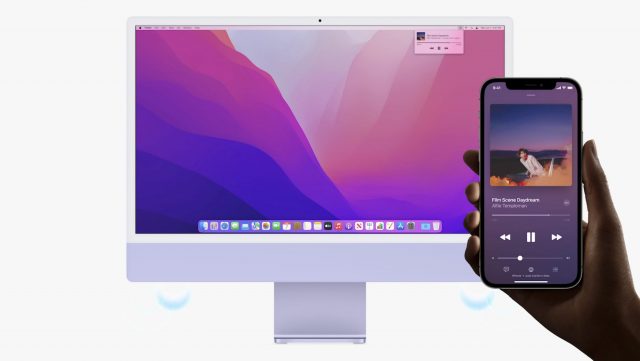 AirPods Pro and AirPods Max Get Find My Network Support

You’ve been able to find lost AirPods using the Find My app for a while, but the feature has been limited. Since the AirPods could only transfer location information through your iPhone, what you see on the map is the last location your AirPods were connected to your iPhone. Josh once used this to recover his AirPods when they slipped out of his pocket on a family member’s couch, but that was pretty lucky.

Now the AirPods Pro and AirPods Max can tap into Apple’s extensive Find My network—the same network of Apple devices that powers AirTag—to keep tabs on lost AirPods. It will provide only an approximate location, but hopefully, that will be enough to get you within Bluetooth range so you can play a sound and locate them. Sadly, Apple said nothing about this feature coming to the plain old AirPods, but perhaps the company is working on a new version of those that will incorporate it and other new features. 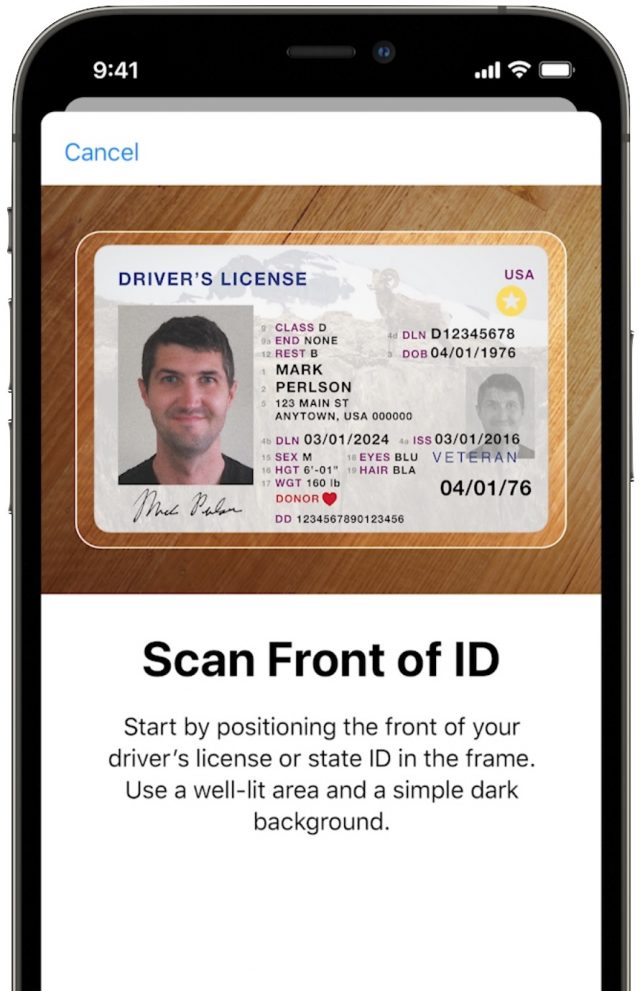 We’ve all gotten used to having credit cards and tickets in the Wallet app, but Apple is now promising that you’ll also be able to add your driver’s license and state ID to Wallet, at least in some states in the US. Wouldn’t it be nice if the Wallet app could really replace your wallet? Apple says you’ll be able to present the digital version of your ID at TSA checkpoints using an iPhone or paired Apple Watch.

But will we actually be able to stop carrying a couple of physical cards at all times? Would you feel comfortable giving your iPhone to a state trooper who just pulled you over? And would they accept it? Plus, it’s not like Apple Pay support is universal—for instance, Home Depot doesn’t take it. Apple’s moving in the right direction, and with the company’s clout, we might get there eventually, but we doubt iOS 15 will eliminate the need to carry cards. See “Two Wallet Cases: Twelve South BookBook Vol. 2 and Ekster iPhone 11 Pro Case” (12 December 2019) and its comments for some suggestions for wallet cases.

With iOS 15, Siri will work like Voice Control and process all speech on the device itself, instead of sending every query to Apple’s servers, even for commands as simple as pausing music. This change should increase performance by eliminating the need to talk to Apple’s services. It should also improve reliability for those who live in areas where cellular Internet access isn’t universal. Plus, it eliminates one of the biggest privacy concerns about Siri. Apple was once trounced in the media for having contractors listen to Siri voice recordings, forcing the company to make changes (see “Apple Announces Siri Privacy Reforms,” 29 August 2019). The big question is if Siri’s dictation will also crib from Voice Control, which has long done a better job (see “How iOS and macOS Dictation Can Learn from Voice Control’s Dictation,” 31 August 2020).

Notes Gets Tags and Mentions

Notes is a good note-taking app, but it has long lacked a feature that’s been standard in most other note-taking apps for years: tags. Tags are one of those things you either get or you don’t, but for those who do, they’re a helpful way of grouping notes together without having to put them in a folder manually. For instance, if you make shopping lists for different stores, you could tag them with #Shopping to see them all. 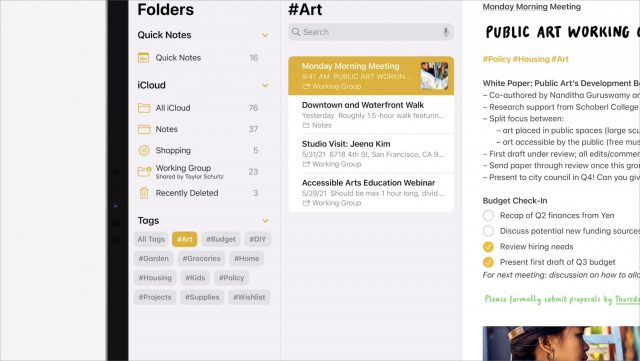 Another useful new feature in Notes that’s commonplace in other collaborative systems is @mentions. If you’re sharing a note with others, you can add an @mention to the text to call their attention to it.

Launch Content on Apple TV with Siri on a HomePod mini

With tvOS 15 and the upcoming HomePod update, you’ll be able to tell a HomePod mini to play a specific show. For example, say, “Hey Siri, play Game of Thrones season 2, episode 3.” Apple didn’t mention the original HomePod, so we’re unsure if it’ll be able to do that or not. We also don’t know if it will work with Netflix, given that the Apple TV app has no insight into Netflix’s programming, or with shows displayed through cable provider apps.

Competing streaming media players have had features along these lines for a while. For example, Google Home smart speakers could play content to Chromecast dongles, and Amazon sells a Fire TV box with built-in Alexa. Sure, you can use Siri directly on the Apple TV and tell Siri on an iPhone to AirPlay content to an Apple TV, but there is something magical about speaking a command to the air to start playing a show on your TV.

Apple didn’t mention this feature during the keynote, but it’s one of our favorites. If a website offers two-factor authentication, you’ll be able to set up verification codes in Settings > Password in iOS 15 and iPadOS 15, or in the (new) Passwords pane of System Preferences or Safari in macOS 12 Monterey. Once you do that, the necessary verification codes will autofill whenever you sign into the site.

If you’re running low on iCloud storage when you buy a new device, you may not be able to use iCloud Backup to move your data to the new device, an annoying Catch-22. With iOS 15 and iPadOS 15, iCloud will provide you as much storage as you need to complete a temporary backup for free for up to 3 weeks. It’s embarrassing that iCloud accounts come with only 5 GB of free storage, rendering them useless for many things, but this change should improve the setup experience for many users who wouldn’t otherwise need to purchase additional iCloud storage.

Comments About Ten “It’s About Time!” Features from WWDC 2021