If you’ve made it this far through the pandemic without cursing your home Wi-Fi, congratulations! You’re a rare bird, and you don’t need this article. Read on, however, if you’re not getting the performance and coverage you want or you’re not sure what steps to take to improve your networked life.

Pay Attention to the Internet Connection

Your Wi-Fi network performance for Internet-based tasks is, of course, dependent on the speed of your Internet connection. If you’re stuck at low double-digit speeds from an incumbent carrier, it might be time to look at new local wired and wireless competitors, like T-Mobile’s 4G/5G home broadband service in some markets. (See “T-Mobile Offers Unlimited 5G Home Broadband Service,” 14 April 2021.)

You may also be able to call your provider and get a better plan or pricing by threatening to switch to a competitor. Over the last few years, I negotiated my 1 Gbps service from CenturyLink from its initial monthly price of $155 down to $85 as the company lowered what it charged new customers and then was willing to drop my fees to match.

If your Internet connection is as souped-up as you’re willing to pay for, let’s look at options to extend your home network and boost performance and coverage.

Connect the Network Dots with Cables

Despite having focused much of my tech writing on wireless networking for over 20 years, I often find wired connections work best. That’s true in nearly all cases except mesh wireless networking, which can sometimes benefit from a wired network, too! Most of the time, connecting a broadband modem and Wi-Fi base stations with wires provides the best throughput. It also gives you the option to plug in computers and streaming video boxes that need high throughput.

When it comes to wires, you have three options, each with varying costs, availability, and installation hassles: Ethernet, powerline, and MoCA.

All wired networking stems from Ethernet, a decades-old standard that’s affordable even in its gigabit flavor. The wiring, switches, and other elements you need to build or extend an Ethernet network will likely cost only tens of dollars. If you have access to crawl spaces or an attic, or if you can drill through even a single wall, you can pull Ethernet cable.

I used to buy a box of Ethernet cable, cut it to length, and crimp RJ45 connectors onto the ends. But because finished and tested Ethernet cables cost so little now, I prefer buying pre-made cables that I know have been tested to work—unlike those I made from scratch. For installing plugs in walls, I like double-sided wall plates that have a jack on either side. 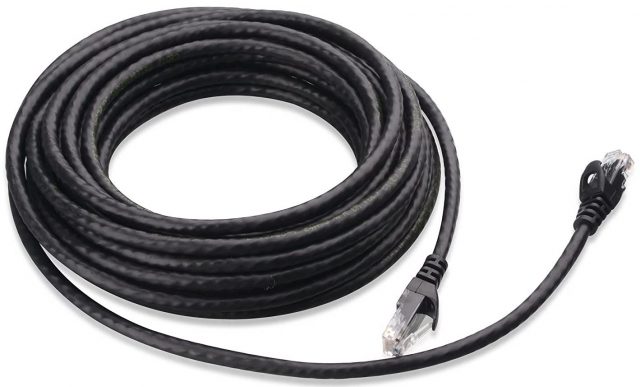 Look for “Cat-6” cables, where the “Cat” means “category” and the “6” refers to a set of electrical specifications designed to allow for certain kinds of performance. You can pay a little less for Cat-5e, but it’s not worth the savings. Cat-6 has better insulation to protect against interference, and it’s designed for the long haul. If you want to use 10 Gbps Ethernet when that becomes affordable for home use, you can with Cat-6 cabling.

Modern Ethernet switches, cards, and other hardware have auto-sensing, auto-switching ports: long gone is the need to have special patch cables or flip switches. You just plug it all in. 100 Mbps and 1 Gbps devices can work on the same network with no additional effort or slowdown.

If you can’t easily access the innards of your home to run Ethernet cable, two other options have matured into great alternatives to or extensions of Ethernet.

Your home electrical wiring can carry both power and data by adding powerline networking adapters. A powerline adapter forms a network with other adapters plugged into the same leg of an electrical circuit in your home. The current generation of technology offers raw rates up to 2 Gbps.

Powerline adapters must plug directly into a wall socket and typically sport at least one gigabit Ethernet jack. Some also include a pass-through electrical plug, a built-in Wi-Fi router to extend a network, or a second Ethernet jack. Prices start at as little as $50 for a set of two with a data rate up to 1 Gbps. 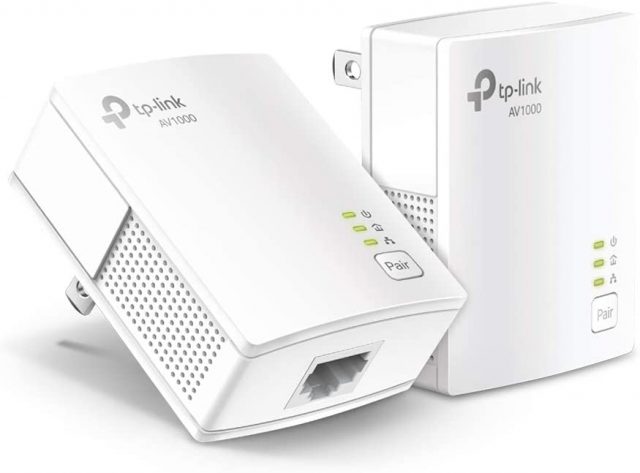 If you live in a shared home or in a building with electrical wiring that may extend beyond your domicile, you can press a button on each adapter to enable security, much like simple Bluetooth pairing.

Powerline technology may not work across any two outlets in a home depending on how the electrical panel is set up, but the current generation is far more tolerant of wiring issues than the earlier ones.

Over a period of several decades, many new and renovated homes were wired for cable TV with coaxial cable in every room and a central wiring panel that distributed services from a provider’s incoming wire. MoCA takes advantage of this infrastructure by encoding 1 Gbps or 2.5 Gbps over coax, with adapters offering one or more Ethernet jacks. It’s more robust and reliable than powerline networking, but it’s also more expensive. A pair of 1 Gbps adapters costs nearly $140. 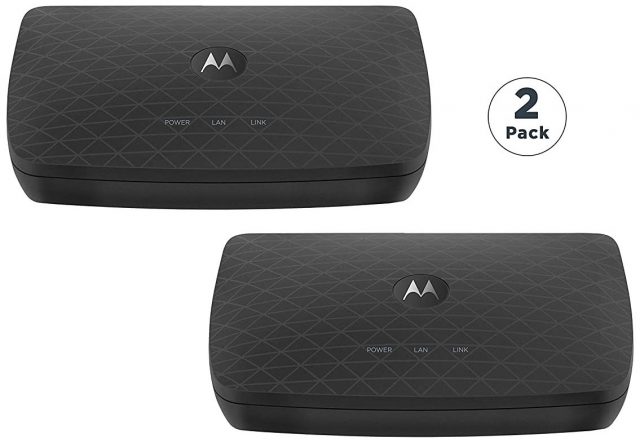 You may need to secure a network created via MoCA adapters if you have cable broadband or video service. A point of entry (PoE) filter prevents neighbors within a short distance from tapping into your network with their own MoCA gear. These filters are readily available and cost about $5. You can also (or instead) set a password on MoCA adapters that encrypts traffic between them via a Web administration interface, much like setting a password for a Wi-Fi network.

In my home, we hit the wall (almost literally) when my wife set up a new office space for her coaching business in our bedroom. Despite having an Ethernet-connected Wi-Fi router in a basement guest room directly beneath where she worked and a wireless extender in our bedroom, she could not get reliable throughput—critical for her video sessions with clients.

After buying some Ethernet cabling and gear and tracing empty spots in the house, I realized adding more wire would be very involved and might require bringing in a cabling specialist. Our house has largely wood lath and brittle plaster walls from the 1920s that are difficult to drill through without causing a lot of damage. Since we have no coax in the house, I tested to see if powerline networking would work for our situation.

Given we already had a Wi-Fi range extender (the TP-Link AC1750 WiFi Extender, model RE450, $59.99) in the bedroom that couldn’t pump out more than 1 Gbps, we checked to make sure the TP-Link AV1000 could deliver the maximum data rate we needed. It did: that pair of plugs provided the wired extension, and our Wi-Fi range extender’s Ethernet port took its incoming connection from one of the powerline adapters. Problem solved.

Upgrading to current Wi-Fi gateways or switching to mesh networking can solve problems of both low throughput and spotty coverage.

You may have outdated Wi-Fi gear. A lot of people do, and that included me until the pandemic hit. Then I had to add into the mix the bandwidth demands of two kids requiring full-time video-based remote learning. While most of my equipment supported at least the 802.11n wireless network standard (Wi-Fi 4), I upgraded everything that didn’t to 802.11ac (Wi-Fi 5). (For an explanation of generations, see “Wi-Fi Switches from Obscure Protocol Names to Simple Generation Numbers” 5 October 2018.)

To give you an idea of how easy it is to fall behind the networking curve when everything is working fine, I wrote about Apple adding 802.11ac to the AirPort Extreme Base Station over 8 years ago (see “802.11ac Promises Better Coverage, but Won’t Hit Advertised Speeds,” 13 June 2013).

A household with only 802.11n devices likely can’t keep up with multiple family members using videoconferencing, streaming video services, or bandwidth- or latency-intensive Internet services and games. Upgrade to 802.11ac for a substantial difference, or future-proof with the latest standard, 802.11ax (Wi-Fi 6), which now doesn’t cost much more than 802.11ac.

If I were making the change today, I’d probably switch to 802.11ax, which offers more efficient use of the wireless spectrum and higher potential maximum throughput than any previous version. The techniques in 802.11ax include advanced strategies to avoid interference with other routers and nearby networks. It can also target individual devices by varying power across multiple antennas to “steer” or “beamform” signals to where they best overlap for reception.

As one example of a modern 802.11ax router, take a look at the TP-Link Archer AX20, which at $99.99 can offer throughput that maxes out at 1.8 Gbps across 2.4 and 5 GHz bands and has four gigabit Ethernet LAN ports. (Neither I nor TidBITS have any relationship with TP-Link. I chose to standardize on TP-Link gear for cost, features, and management via its Tether app.) 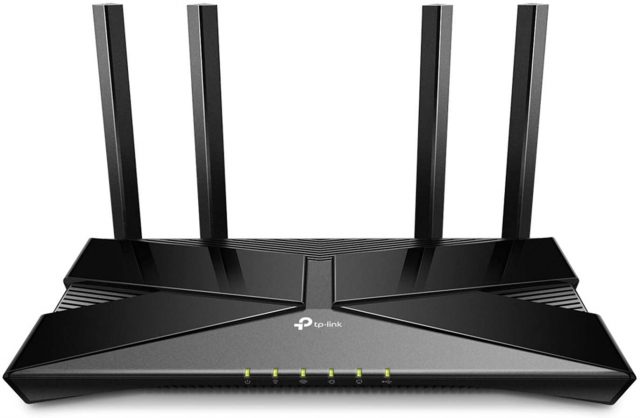 Conventional routers like the TP-Link Archer AX20 still require wired connections to other routers to extend the network, using any of the techniques above for extending a network. Many people have instead opted into mesh networking, which can rely entirely on wireless communication among network components, called nodes.

As far as the client hardware is concerned—a computer, phone, tablet, or other device—the nodes act exactly like regular Wi-Fi access points. But when communicating among each other, nodes determine the most efficient way to send data packets between source and destination, whether to and from the Internet or among devices on the network.

Nodes don’t require any wiring. You just set up two or more of them, often with iPhone app assistance about optimal placement, and they find each other and start routing data. The NetGear Orbi and Blackhawk and Amazon Eero (see “Eero Provides Good Wi-Fi Coverage in a Handsome Package,” 25 June 2016) are three of the most popular hardware options, but D-Link, Cisco Linksys, TP-Link, and others also have mesh offerings. (The Linksys Velop is the only one sold in Apple’s stores. See “Velop Provides First-Rate but Expensive Wi-Fi Mesh Networking” 9 July 2018.) 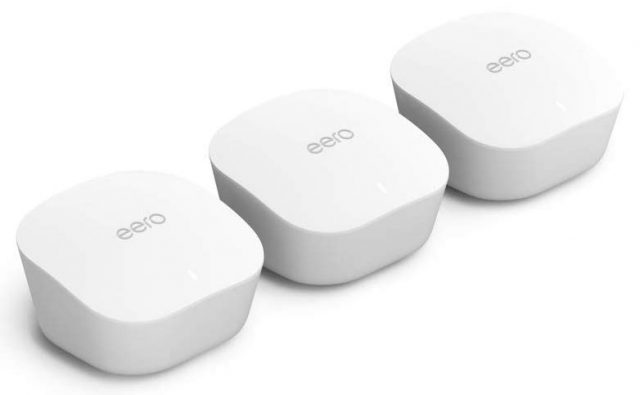 Mesh networking has one drawback: it uses Wi-Fi frequencies to communicate with both client hardware and other nodes. That means every re-transmission of data between nodes reduces the overall network throughput. With a busy network full of streaming data, that approach can cut into your performance and result in lower throughput, choppy video, and slower downloads and uploads.

If you need high and consistent throughput, I recommend purchasing either so-called “tri-band” mesh nodes or nodes that have wired backhaul:

Mesh networking nodes that meet my high-throughput recommendations cost about the same as the comparable number of traditional Wi-Fi gateways.

The original dual-band Eero with Ethernet backhaul is $199 for a three-pack; the Eero 6 Pro with both Ethernet and a tri-band radio system runs $599 for its three-pack. The difference? The plain Eero promises coverage with three nodes over a smaller area than the Eero 6 Pro (5000 square feet/465 square meters versus 6000 square feet/557 square meters) and up to 500 Mbps of throughput compared to 1 Gbps. 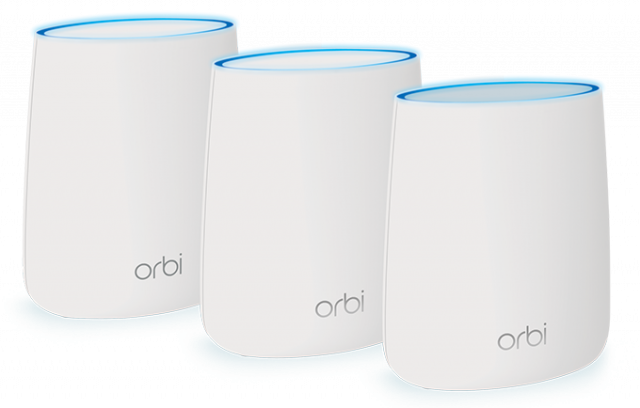 If you’ve been suffering with a Wi-Fi network that doesn’t provide the coverage and throughput you need for Zoom calls, Apple TV streaming, and everything else you want to do, there’s no reason to live with it any longer. Just spend a few minutes evaluating your needs, how much you’re willing to spend, and the physical constraints of your home. Then decide whether it makes sense to jump to a modern mesh network or rely on one of the wired solutions with additional traditional Wi-Fi routers.

Comments About Improve Your Home Wi-Fi with Mesh, Powerline, MoCA, or More Routers