But that law applies only to apps sold in South Korea, and we would be surprised to see Apple voluntarily expand that program to other countries. However, two recent settlements have global implications.

Settlement in US Developer Class-Action Suit

Apple announced changes to the App Store as part of settling the Cameron et al v. Apple Inc. lawsuit, but the impact seems limited. From what we could glean from Apple’s announcement, much of the settlement involves Apple continuing to do what it’s already doing, such as agreeing to maintain the App Store Small Business Program for at least three years, even though there was no previous indication it would ever end (see “Apple Drops App Store Commission to 15% for Small Developers,” 18 November 2020).

The only two changes that seem notable, if not earth-shaking, are developers being allowed to notify their users about alternatives to in-app purchases in email (but not in apps themselves), and Apple expanding the number of price points from fewer than 100 to more than 500. So you might see apps priced at $1.49 instead of $0.99.

We don’t know how best to interpret this settlement because we have no skin in the game. For a roundup of responses from well-known Apple developers, we recommend reading Michael Tsai’s blog post. In short, they aren’t impressed, which casts a shadow on Apple characterizing the settlement as with “US developers” rather than “the lawyers for a set of developers who don’t seem to represent the opinions of the larger Apple development community.”

Even if Apple’s concessions are minimal, they, along with the South Korean law, show both how much pressure Apple is under and that Apple will respond to developer concerns when necessary.

Apple’s settlement with the Japan Fair Trade Commission (JFTC) goes further. In a small but significant change, Apple says it will allow developers of “reader” apps to include in-app links to their websites so users can create and manage their accounts. For instance, the Netflix app could have a link to the Netflix website. What a concept! The change will go into effect in early 2022 after Apple updates App Store guidelines and its review process to accommodate the change. 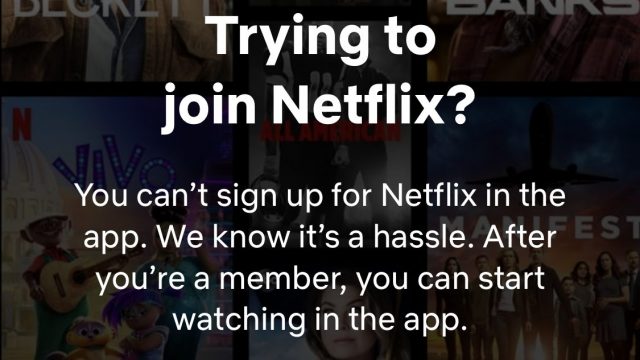 This change affects one of Apple’s most-loathed policies, the so-called “anti-steering” rule that prevents developers from providing links to external payment systems in an attempt to force them to use Apple’s in-app purchase system. Allowing reader apps to let users link out to account management systems seems like a small and obvious option, but Apple has thus far been steadfast in rejecting apps that present such external links.

What exactly is a “reader” app? In theory, that category includes content-consumption apps like Kindle, Spotify, and Netflix. However, as I pointed out in “Developers v. Apple: Outlining Complaints about the App Store” (13 August 2020), Apple’s definition of a “reader app” is arbitrary. Here’s how Apple defines them in its App Store guidelines:

But Apple also apparently once counted Dropbox as a reader app since the only option when you opened the app was a login. It now offers various sign-up options. In any case, we expect Apple’s definition to change or at least become more concrete. The question is if Apple will have to get the JFTC to sign off on the new definition or if it’s allowed to make such decisions arbitrarily. JFTC’s statement doesn’t clarify that, but Apple agreed to a review once per year for three years.

On Daring Fireball, John Gruber shared a couple of anonymous anecdotal accounts of developers who don’t trust Apple’s new linking policy and suspect there are strings attached, such as being required to also offer subscriptions as in-app purchases or fearing Apple will invent new reasons to reject their apps for links. It shows how much trust Apple has squandered with developers.

There is also the question of how this intersects with Apple’s program for “premium subscription video entertainment providers,” which allows users of the Amazon Prime Video app to make content purchases within the app without using Apple’s in-app purchase system (see “You Can Now Make Purchases in the Amazon Prime Video iOS and Apple TV Apps,” 3 April 2020). A handful of other video services are included, but not the likes of Disney+, Hulu, and Netflix.

The new linking rule won’t apply to games or in-app purchases, thus doing nothing to resolve Apple’s legal battle with Epic Games, which has exposed to the public a treasure trove of internal emails that reveal Apple’s thinking on many of these matters.

We suspect Apple will be forced to make additional concessions in the future. India has opened an antitrust case against Apple, targeting the company for forcing developers to use its in-app purchase system. Apple is also fighting a similar battle in the European Union.

Meanwhile, the bipartisan Open App Markets Act proposed in the United States Senate would go even further, allowing third-party app stores and sideloading, letting developers use alternative payment methods, and allowing developers to communicate openly with customers. We have no idea of its prospects for passage, but it’s unusual when Tennessee Republican Marsha Blackburn and Minnesota Democrat Amy Klobuchar agree on something.

Apple sees where things are going and is taking independent actions aimed at staving off regulation, such as its just-announced News Partner Program, which halves the subscription commission rate to 15% for publishers who offer their content in the Apple News Format. And last year, Apple offered a big concession with its App Store Small Business Program, which dropped the sales commission to 15% for most developers (see ​​“Apple Drops App Store Commission to 15% for Small Developers,” 18 November 2020). But such moves might be too little, too late.

At this point, Apple might be best served by making a dramatic overhaul to its most controversial App Store policies and behaviors, such as allowing alternative payment methods within apps, dropping App Store ads (are they really worth it?), eliminating special deals with big developers, and overhauling the review process to better catch counterfeit apps and not unfairly punish legitimate developers. Apple could also allow streaming game services and emulators into the App Store. iDOS was one of the neatest iPad apps in years, but after initially approving it, Apple changed its mind and pulled it.

Then Apple might have a stronger position from which to resist clunky and likely misinformed regulation that may have unintended consequences. And perhaps then developers would lay down their pitchforks and torches.