Despite the astonishing performance of the M1 chip, Apple’s first foray into powering Macs with Apple silicon, the initial Macs to use it clustered on the low end of the product line: the MacBook Air, 13-inch MacBook Pro, Mac mini, and 24-inch iMac. How would Apple extend its custom system-on-a-chip to the more powerful Macs in the product line?

Now we know. At today’s “Unleashed” event, Apple unveiled the M1 Pro and M1 Max, a pair of chips that provide significantly more power than the M1 to a pair of new MacBook Pro models. Disappointingly for those who rely on desktop Macs for their work, Apple made no mention of the 27-inch iMac or Mac Pro, nor was there any talk of a beefier Mac mini. The company is undoubtedly working on upgrades to those models, but they may be a lower priority than the popular MacBook Pro. Plus, supply chain limitations may be causing Apple to focus on fewer models for now.

Regardless, right now, we can’t separate the M1 Pro and M1 Max from the new 14-inch and 16-inch MacBook Pro models they power, so let’s look first at the chips and then examine the rest of the MacBook Pro changes. 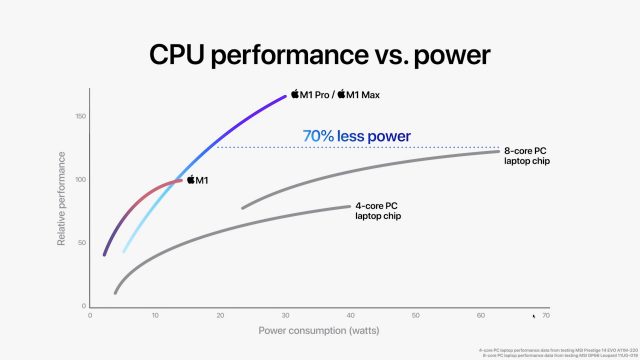 Looking at GPU performance per watt is also interesting. Apple compared the M1 Max to the GPUs in the largest PC laptops (the ones that beggar the definition of “laptop”) and claims that it matches their performance while using an astonishing 100 watts less power. 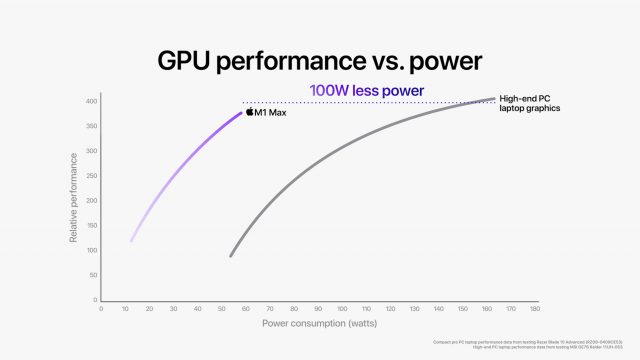 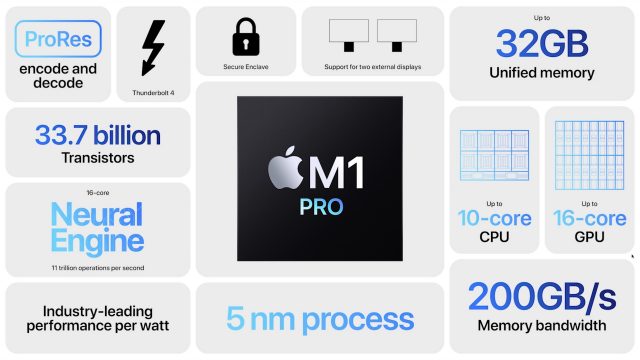 It’s good to see Apple listening to feedback, however long it may take (<cough> butterfly keyboard <cough>). In these significant revisions to the MacBook Pro, Apple increased the number of ports and brought back MagSafe charging, eliminating the need for hacks (see “Are Cheap MagSafe-Like Adapters for USB-C Worthwhile?,” 4 March 2021). Where the previous MacBook Pro models were limited to four Thunderbolt 3 ports and a headphone jack, the new models offer the following:

In one final bit of listening to users, Apple dropped the much-maligned (or at least poorly leveraged) Touch Bar in favor of traditional F-keys. The new MacBook Pro models retain a Touch ID sensor like the M1-based MacBook Air. If you like the Touch Bar, you can still get it in the M1-based 13-inch MacBook Pro, which remains available, although the Intel-based models are no more. 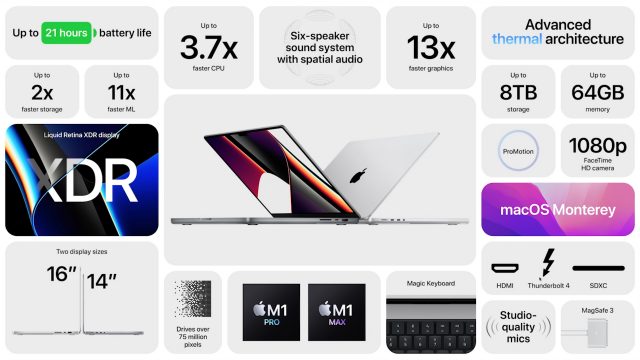 Nevertheless, the big news is the performance provided by the M1 Pro and M1 Max. Benchmarks will undoubtedly start to appear soon, but given the promised increases over the already zippy M1 chip, we anticipate that these laptops will be shockingly fast. Apple says that the 16-inch MacBook Pro CPU performance is twice as fast as the previous Intel Core i9 MacBook Pro, and GPU performance is either 2.5 times (M1 Pro) or 4 times (M1 Max) faster than that previous model. Indeed, nearly all of Apple’s examples during its announcement revolved around performance-intensive audio and video work. It was a little sad not to see any science or engineering examples, but today’s Apple focuses on the creative professional market.

Although I’m not sure that I agree with Apple that these new MacBook Pro models were “completely reimagined,” they do offer a somewhat updated industrial design that retains rounded edges but seems a little more squared-off. Although they’re the same thickness as the previous 13-inch and 16-inch models, they’re heavier, weighing 0.4 pounds (0.18 kg) more: 3.5 pounds (1.6 kg) for the 14-inch model and 4.7 or 4.8 pounds (2.1 or 2.2 kg) for the 16-inch model—the M1 Max configurations are a bit heavier.

For the 14-inch MacBook Pro, that weight increase likely comes in part from a larger battery—70 watt-hours, up from 58.2 watt-hours in the previous 13-inch model. The 16-inch MacBook Pro, however, retains the previous model’s 100 watt-hour battery. Regardless, both models feature improved battery life, with up to 11 hours (14-inch) or 14 hours (16-inch) of wireless Web use. The Apple TV app movie playback spec is much higher (17 and 21 hours, respectively), probably because of the efficiencies provided by the video decode engine in the M1 Pro and M1 Max chips. Regardless, battery life estimates are fantasy in my experience—just assume they’ll do a little better than the previous models.

The 14-inch model comes with either a 67-watt USB-C power adapter (with the M1 Pro 8-core CPU) or a 96-watt USB-C charger (with the M1 Pro and M1 Max 10-core CPUs), and the low-end model can upgrade to the 96-watt charger for $20. That’s worthwhile since it enables fast charging. The 16-inch model comes standard with a 140-watt charger that also provides fast charging. Each comes with a USB-C to MagSafe 3 cable, though you can also charge with a normal USB-C or Thunderbolt cable.

Some battery life improvements may come from the new Liquid Retina XDR screens that use the mini-LED backlighting technology from the iPad Pro. These screens are significantly brighter than those on the previous models, which were rated at 500 nits of brightness. The new displays can sustain 1000 nits of full-screen brightness and hit a peak of 1600 nits. They also support ProMotion, which adjusts the screen refresh rate (and thus power consumption) to match the needs of the onscreen content.

Apple expanded the screens physically, bringing them significantly closer to the edges, so much so that the FaceTime HD camera lives in an iPhone-like notch that cuts the Mac menu bar in half and may be annoying in Light mode (see “The Dark Side of Dark Mode,” 31 May 2019). Judging from Apple’s screenshots, full-screen apps don’t use the menu bar real estate so the notch never hides aspects of an app’s interface. The FaceTime HD Camera is now 1080p, although it apparently doesn’t support Center Stage (see “Center Stage Keeps You in the Video Chat Frame,” 23 September 2021).

Apple also made a big deal about how it improved the audio output and input in the new MacBook Pros. They feature a six-speaker sound system with two tweeters and four woofers, and they support both wide stereo sound and spatial audio when playing audio with Dolby Atmos. When using third-generation AirPods (see “Apple Unveils Third-Generation AirPods, Tweaks HomePod mini and Apple Music,” 18 October 2021), AirPods Pro, or AirPod Max, they also support spatial audio with dynamic head tracking. For input, they have a three-mic array with directional beamforming. I don’t doubt that Apple has improved things, but everything I hear from people who work with audio is that you’ll still use external speakers and microphones for anything serious.

Although Apple provides two pre-configured options for the 14-inch MacBook Pro and three for the 16-inch MacBook Pro, it doesn’t look like the company is playing any games during configuration. In other words, you can start with the base-level configuration in either size and choose options to end up at the maxed-out configurations. The 14-inch starts at $1999 and the 16-inch starts at $2499, although the price difference between comparably specced 14-inch and 16-inch models is a mere $200.

With unified memory, there are three options:

Apple says the SSD-based storage hits 7.4 GBps for read speeds and is more than twice as fast as previous SSDs. The options here are impressive, if pricey:

It’s difficult for us to make recommendations here because no one has any experience with just how fast the M1 Pro and M1 Max chips actually are. In addition, the M1 family uses its unified memory so much more quickly and efficiently that it’s hard to make suggestions for how much memory is enough. Our advice for the moment is to let your budget be the guide—a maxed-out 16-inch MacBook Pro costs $6099, so unless you’re happy to spend that much, play with the configurator to keep the cost out of the stratosphere.

If you’re interested, you can place an order now. How long it will take to arrive depends on the configuration. From what I’m seeing at the moment, you can get a 14-inch MacBook Pro in a week if you get the lowest-level M1 Pro and only 512 GB of storage; bumping to any other configuration moves delivery into the first week in November. For the 16-inch MacBook Pro, only the M1 Pro configurations will ship in early November; choose an M1 Max and you’re looking at the first week in December. And, of course, as people order, those dates may get further out until Apple’s production is fully up to speed, supply chain constraints permitting.

In the end, these are impressive laptops, and those who need massive power in a portable package won’t go wrong with them. The only downsides are the extra weight and the notch, and I’m sure that some people would have liked a USB-A port to avoid needing a dongle. These aren’t reasons to delay a purchase, but they give Apple room to improve in future updates. Just don’t hold out for USB-A.