Nearly two years ago, Apple bought the hyperlocal weather company Dark Sky (see “Apple Acquires Dark Sky Weather Service and App,” 31 March 2020). Unsurprisingly, Apple shut down Dark Sky’s Android and Wear OS apps on 1 August 2020, providing a full refund to subscribers, and it also shut down forecasts, maps, and embeds on the Dark Sky website on that date. In our coverage, we noted:

However, the Dark Sky iOS app will remain available to purchase and continue to work, at least until Apple builds its functionality into iOS.

Perhaps due to the acquisition happening right at the start of the pandemic, Dark Sky features were slow to reach Apple’s bundled Weather app. iOS 14 added a next-hour precipitation chart, government alerts of severe weather, and the chance of precipitation in the multi-day weather forecast. But as any Dark Sky user knows, such features barely scratch the surface of what Dark Sky could do, with an animated radar view that could peer into the future, hyperlocal precipitation notifications, and other notifications that provided a daily summary, umbrella and sunscreen reminders, and more. iOS 14’s Weather wasn’t bad, but it didn’t match up to Dark Sky.

With iOS 15, Apple redesigned Weather significantly. If you have an iPhone with an A12 Bionic or later, Weather’s animated backgrounds now boast thousands of variations that more accurately represent the sun position, clouds, and precipitation. Snazzy, but I’m once again put in mind of that cheeky checkbox in Eudora from many years ago: “Waste CPU cycles drawing trendy 3D junk.”

More functionally, Weather now provides animated weather maps, a better 10-day forecast, and tiles of weather data that can be extremely helpful, like rainfall in the next 24 hours (several of us have experienced significant flooding this year). The maps are welcome, but Dark Sky guesses where weather systems will go either 1 hour (zoomed in) or 5 days (zoomed out) into the future, whereas Weather looks only 1 hour or 12 hours into the future, depending on zoom level. Sure, that 5-day look-ahead wasn’t guaranteed, but it gave you a sense of how weather systems were moving toward you.

But there was one more promised feature from Dark Sky in the iOS 15 version of Weather: next-hour precipitation notifications. These notifications were Dark Sky’s killer feature, as I realized the first few times it alerted me to imminent rain while we were at a picnic or festival (see “Dark Sky 5 Offers Hyperlocal Weather Forecasts for iOS,” 7 August 2015). So even though Josh lured me over to using the “crazy-powerful” CARROT Weather (which is both crazy and powerful; see his “CARROT Weather Predicts Cloudy with a Chance of Snark,” 22 January 2018), I’ve been curious to see how Apple would enhance Weather with Dark Sky’s capabilities. After all, most people who aren’t as weather-involved as I am are happy to rely on Weather, and surely they’d appreciate next-hour precipitation notifications.

Turning them on is a little involved. Assuming you’ve launched Weather at least once and agreed it could send you notifications, start in Settings > Weather, which is a new option, cleverly hidden between Stocks and Translate, since Apple still refuses to alphabetize—see “Bad Apple #2: Alphabetize Settings in iOS” (21 February 2018). Make sure that Weather can access your location at all times, that notifications are enabled, and that they’re enabled for the locations you want within the Weather app itself. (Tap Weather Notification Settings to access the in-app settings; you can also tap the ••• button in the Locations list.) 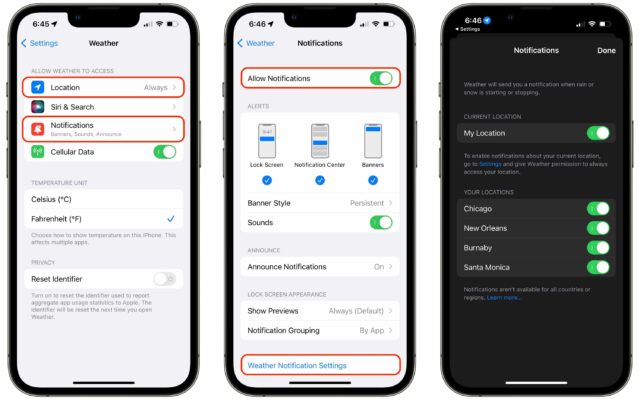 But here’s the thing. Weather’s notifications don’t work for me, for Tonya, and for at least some people on TidBITS Talk. By “don’t work,” I mean that they don’t reliably appear when it’s obvious that precipitation is starting or stopping outside, nor do they match notifications from other weather apps like Dark Sky and CARROT Weather (which I configured to use Dark Sky as its weather source). They seem random. If you can’t depend on a weather app’s precipitation notifications to match reality, at least within some reasonable level of interpretation, there’s no point in using it.

In that TidBITS Talk discussion, Richard Tench reported initially that Weather’s notifications seemed to be working. But then, a few days later, his hometown of Burnaby, British Columbia, experienced such heavy rain that roads flooded. Weather’s one notification for him for Monday, when the area received 1.88 inches (47.8 mm) of precipitation, was ​​“Light Rain Soon. Expected to start at your location at 8:29 AM.” Since my son Tristan also coincidentally lives in Burnaby, it’s one of my locations in Weather. All I received for Burnaby was one notification on Sunday and nothing on Monday, as you can see below. 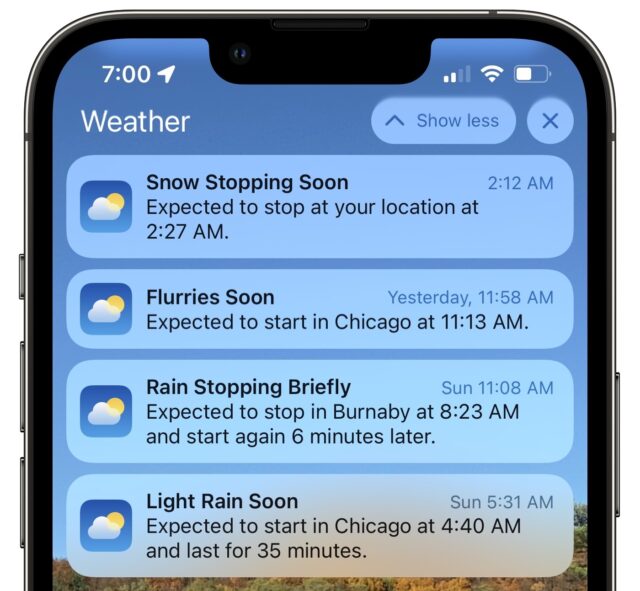 Several other reliable sources reported that Weather’s notifications seem to be working fine for them, including in Chicago, another of the locations I had added to my list and for which I haven’t received many notifications. I can’t say for sure that there’s a discrepancy with Chicago notifications, but I’ve received so few that it seems suspicious.

Do Weather’s notifications seem to match reality for you? And if you have Dark Sky, are you seeing Weather provide the same notifications as Dark Sky? Perhaps things will improve in iOS 15.2, but it seems odd that the developers of Dark Sky, which has provided accurate precipitation notifications for many years, would have trouble with something so basic.

Alternatively, perhaps that’s why the Dark Sky app remains for sale at $3.99 and has even received three bug fix updates since Apple’s acquisition.

Comments About Weather in iOS 15 Gains Precipitation Notifications (But Do They Work Reliably?)