Fantastical is a poster child for how third-party developers can improve on Apple’s bare-bones bundled apps. The full-featured calendar app from Flexibits has long offered features that Apple’s Calendar lacks, such as an easily accessible menu bar app, thoughtful design with numerous helpful views, easy adding and joining of conference calls, calendar sets with automatic switching, weather forecasts, and more.

The marquee addition of the just-released Fantastical 3.6 is Fantastical Scheduling, a two-part feature that makes it easier to schedule meetings, but there are a few other changes. Version 3.6 also includes a new Quarter View that shows 3 months at a time for big-picture planning, along with a stair-step line to make the splits between months in multi-month views more obvious. Another nice tweak is the new Up Next toggle. Before this, when you pressed Command-T to see the current day in the Day Ticker sidebar or menu bar app, it showed you all your tasks before the day’s timed events, which could be annoying. Now, when you press Command-T a second time right away, Fantastical jumps past the current day’s tasks to focus on timed events. Finally, if you click a day in the Day Ticker with no events, the list will initially show “No Events” but then remove it when you scroll.

But let’s focus on the marquee aspects of Fantastical Scheduling: Proposals and Openings.

Have I Got a Proposal for You

Fantastical’s Proposals feature isn’t new but has received significant enhancements. With it, you can create an event and then add other possible times, allowing invitees to specify which of the choices work for them so you can pick the most mutually appropriate time. The enhancements include a grid view of invitees and proposal times to zero in on the best positive responses, an indicator that shows invitees which proposed times conflict with existing meetings, and a dedicated comment view for conveying additional information (“I can make it at 3 PM, but I’ll have to bring my dog.”) 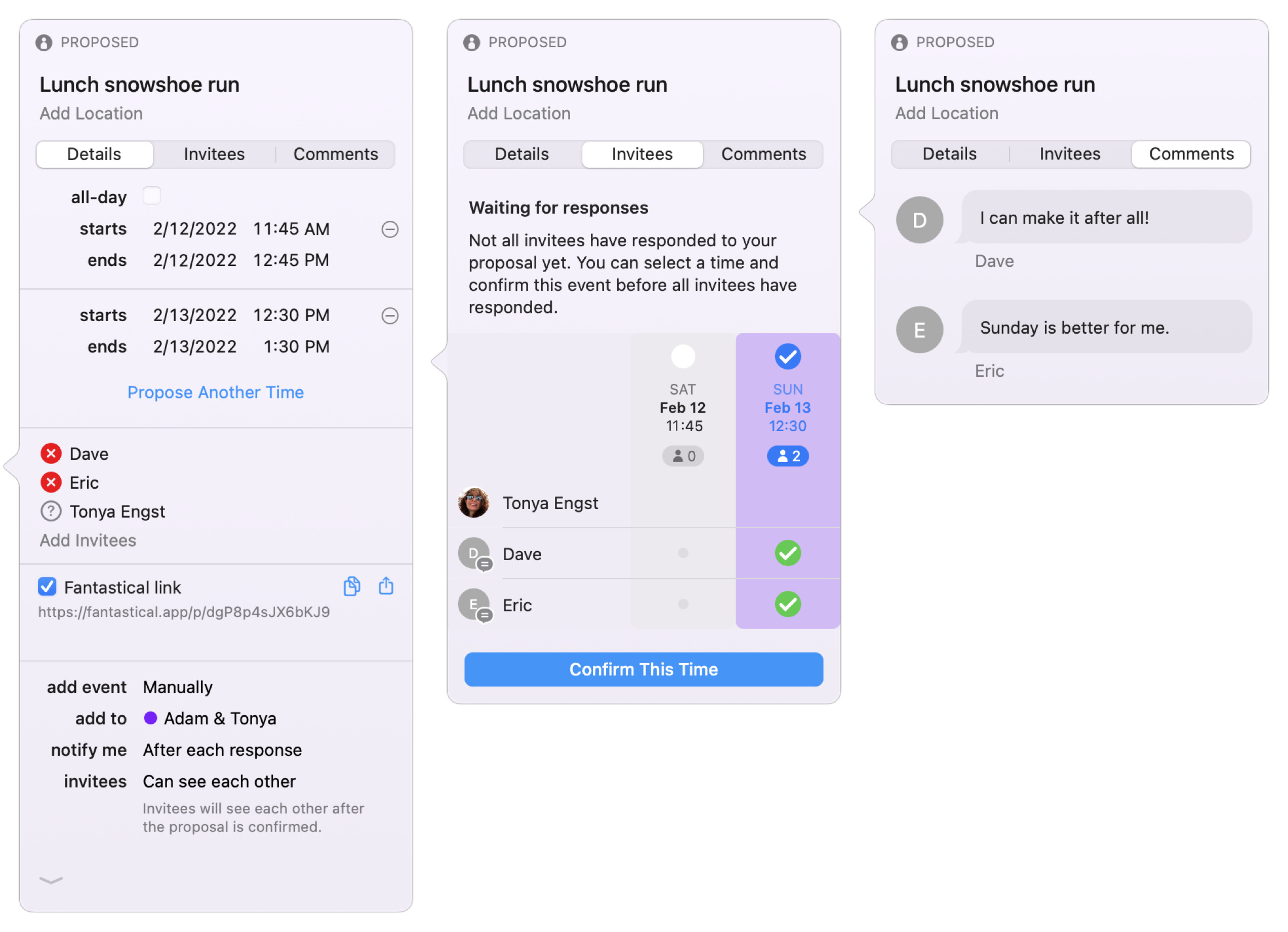 It’s important to note that people coming to your meeting don’t need to be using Fantastical, a Mac, or even any calendaring program at all as long as you create and share a Fantastical link for your proposed meeting. Anyone can load that link in their Web browser. 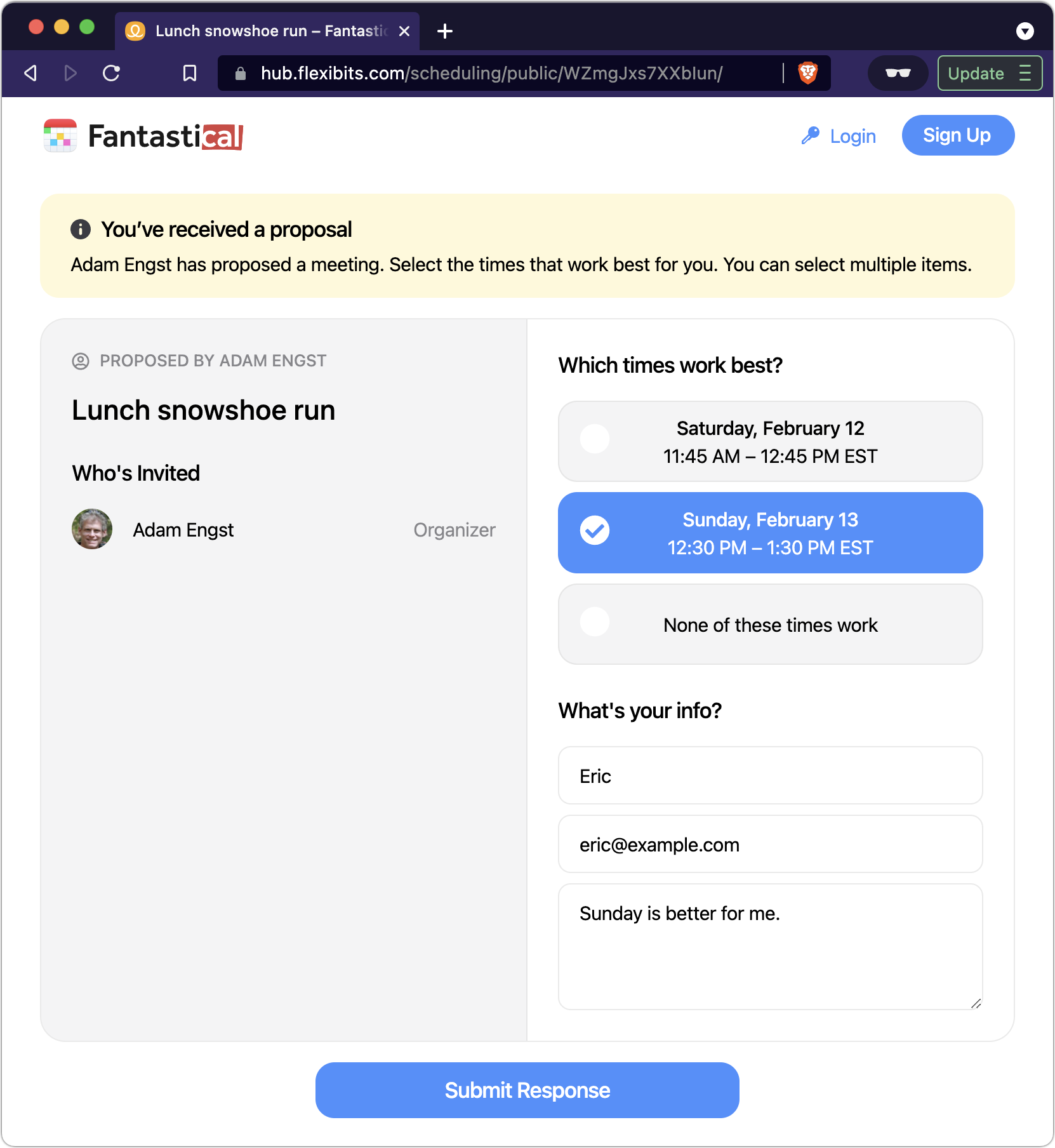 The Proposals feature is sort of an integrated version of Doodle (see “Doodle Helps You Schedule Meetings,” 28 May 2015). As much as Doodle-like group scheduling features are useful, I’m now using When2Meet for nearly all group scheduling instead (see “When2Meet: An Easier Way to Settle on a Meeting Time,” 6 January 2021). It would be great to see a future version of Fantastical integrate a When2Meet-like method of helping a group zero in on the best time to get together—it’s easier than making a few suggestions that may not work for everyone.

See If You Can Find an Opening

The big news in Fantastical 3.6 is the Openings feature, which lets you publish available times during which people can book meetings with you. This isn’t a new idea—self-booking apps and services abound, with Calendly being perhaps the most well-known. We wrote about another in “WhenWorks Offers Self-Service Scheduling for Appointments or Office Hours” (2 July 2018), but WhenWorks seems to have changed hands and hasn’t been updated in a year.

What sets Fantastical’s Openings apart is that it’s deeply integrated into Fantastical and it takes a strong stance toward protecting your privacy. It’s disabled by default, and once you turn it on, it uploads to the Fantastical Scheduling server only your available time slots within the specified ranges—you’re not sharing your complete calendar with event titles, times, locations, and invitees as you might be with another service that just links to your calendar. Also, when you set it up, you can specify which calendar set it uses to identify available times, letting you keep certain calendars entirely outside the system.

Happily, the same day that Fantastical 3.6 shipped, I had a perfect real-world test case. Last month, I coordinated a group purchase of Dion racing snowshoes for members of the local running community. The shipment had just arrived, creating a situation where 24 people needed to stop by my house to pick up their snowshoes. Rather than negotiating a pickup time individually with each person, I used Fantastical’s Openings.

Choosing View > Openings let me get started creating a template on the Fantastical Scheduling website, where I entered a name, description, calendar to accept the events, and custom link name in the Details section. Then, in the Availability section, I specified the hours during which people could book 15-minute pickup times—it would automatically exclude times when I already had events scheduled—and allowed the pickups only 7 days in advance. Finally, in the Approval section, I set it to approve meetings automatically; if I wanted more control, I could have retained manual approval.

I later replicated the same task on my iPhone, and I was impressed at how Fantastical on the iPhone was functionally identical to its sibling on the Mac. 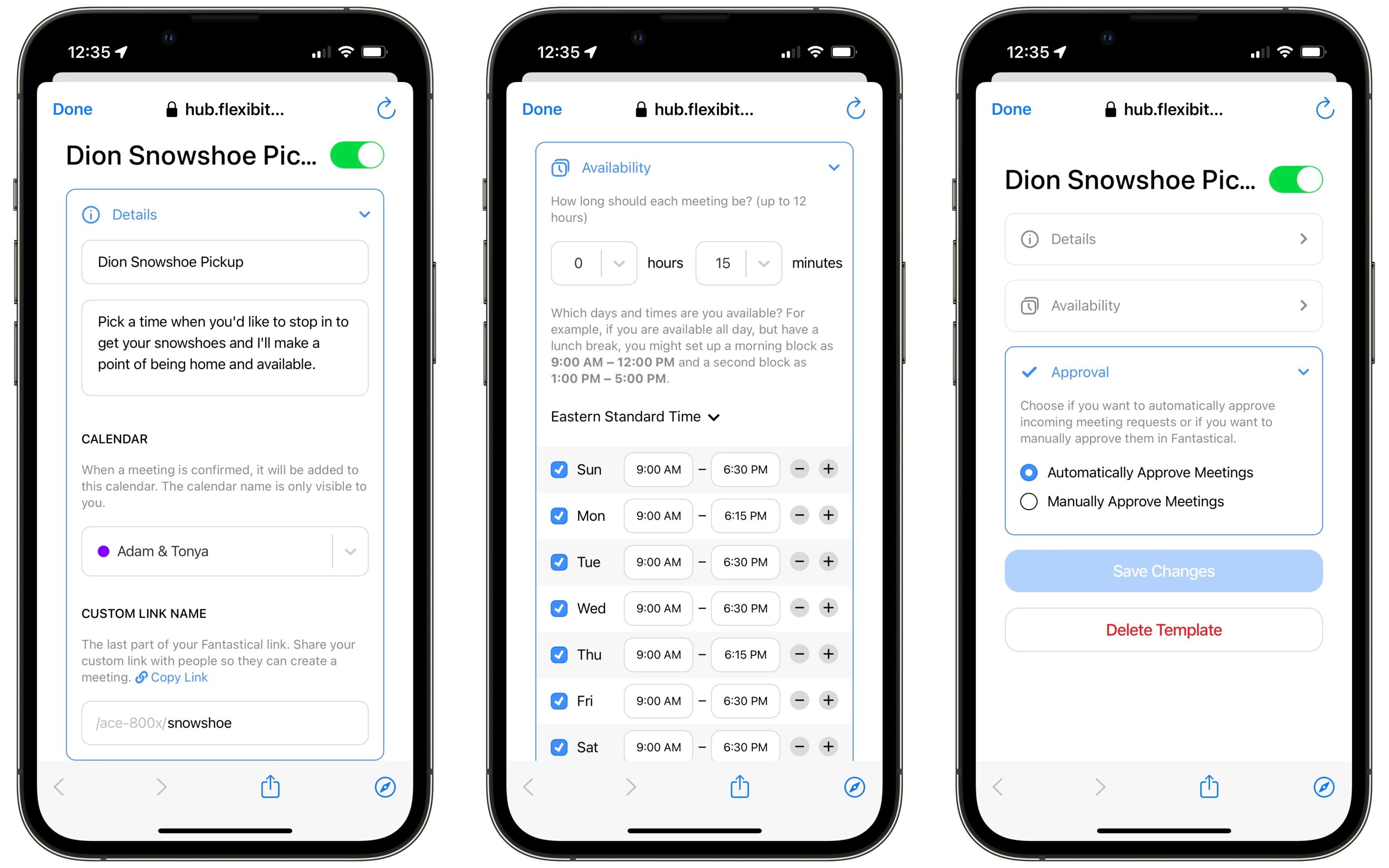 Then I sent the custom link via email to all the people who needed to schedule pickups. As with Proposals, they didn’t need to use Fantastical, a Mac, or even a calendaring system. It’s a three-screen process on a website:

As people started to book times, I received emails from Fantastical Scheduling, and because I had set up automatic approval, events began to appear on my calendar.

Overall, Fantastical Scheduling worked well. One person got an error when she tried to load the scheduling page in Safari, but it worked a few minutes later in Chrome. Flexibits said that was a day-one hiccup that has now been fixed—I subsequently had no trouble using Safari. Everyone who has picked up their snowshoes so far said the process was extremely easy, and I thoroughly enjoyed how it made so many friends show up at my house throughout the day.

There are a few quirks and omissions to note:

Notably, the addition of the Fantastical Scheduling feature, which involves significant server-side functionality, is free with a Flexibits Premium subscription. That subscription allows Flexibits to offer both Fantastical and Cardhop with limited features for free; if you pay $4.99 per month or $39.99 per year (a 33% discount), you get access to the full feature set of both apps (see “Cardhop 2.0 Bundled with Fantastical in Flexibits Premium,” 27 May 2021). There’s also a Flexibits Premium for Families, which costs $7.99 per month or $64.99 per year (a 32% discount) and lets up to five family members use Fantastical and Cardhop on all available platforms: Mac, iPhone, iPad, and Apple Watch. Fantastical requires macOS High Sierra 10.13.2 or later, iOS 13 or later, iPadOS 13 or later, and watchOS 6 or later. There’s a 14-day free trial of Flexibits Premium, and the company has reset the trial option for anyone who had previously tried it.