At its Peek Performance event, Apple unveiled an entirely new Mac model: the headless Mac Studio, powered by either an M1 Max or the new M1 Ultra chip, and meant to be paired with a new 27-inch Studio Display that has next to nothing in common with Apple’s similarly named screens from the late 1990s and early 2000s.

The Mac Studio/Studio Display combination renders the immensely popular 27-inch iMac obsolete, and Apple dropped it from the lineup. The company also said that it has only one more model to bring to Apple silicon—the Mac Pro—but that’s an announcement “for another day.”

These moves radically change the calculus for putting together a Mac system that meets a wide variety of needs. Apple may not have addressed all of the requests in “Apple: Design Macs for Other Types of Professionals” (5 March 2022), but trimming the iMac line to just the 24-inch model makes it clear that professionals should move on from the 27-inch iMac and instead focus on pairing the Mac that best meets their needs with a Studio Display.

Rumors kept suggesting that today’s Mac would be powered by an M2 chip, but Apple proved once again that you can’t believe everything you read on the Internet by instead introducing the final member of the M1 family: the M1 Ultra.

One of the traditional ways of increasing performance is to connect two chips together, but that results in slowdowns due to the interconnect and requires developers to code their apps specifically for the two-chip combination. To avoid that, Apple designed its M1 Max chip with something that hadn’t previously been mentioned—the UltraFusion architecture that offers 2.5 terabytes per second of interprocessor bandwidth, supposedly more than four times the competition. Equally important is the fact that the M1 Ultra looks to developers like a single chip, eliminating the need for custom coding. 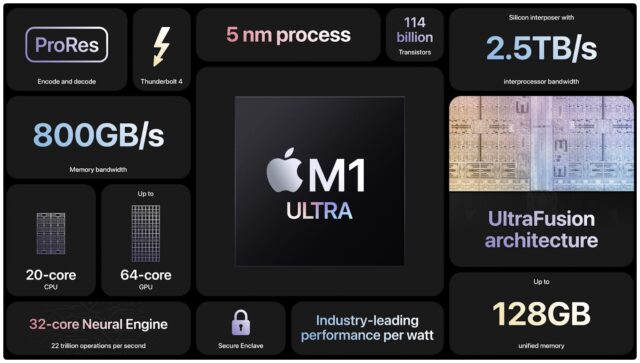 Don’t assume that you need the M1 Ultra. The vast majority of Mac users have been happy with the performance of the M1, with the M1 Pro and M1 Max offering more power to those who work with audio, video, and photos. The M1 Ultra provides even more headroom to ensure that no one can claim that a Mac lacks the power for some task. 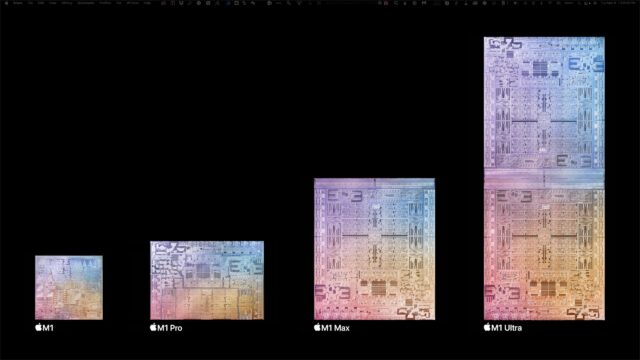 But we’re not chip geeks, so let’s move on to where the M1 Ultra will be used: Apple’s new Mac Studio. It looks like an overinflated Mac mini—it has the same 7.7-inch (19.7 cm) square outline, but where the Mac mini is 1.4 inches (3.6 cm) high, the Mac Studio is a bulky 3.7 inches (9.5 cm) high. Much of that vertical space is occupied by fans necessary to keep the M1 Max or M1 Ultra chips cool, but Apple says the Mac Studio makes minimal noise.

The Mac Studio also improves on the Mac mini’s set of connections. On the back, it sports four Thunderbolt 4 ports, a 10-gigabit Ethernet port, two USB-A ports, an HDMI port, and a 3.5 mm headphone jack. 802.11ax Wi-Fi 6 is built in, along with Bluetooth 5.0. You can drive up to five displays, including four 6K Pro Display XDRs over Thunderbolt and a 4K display over HDMI. That’s not likely, given both the $20,000 cost of all those displays and the difficulty of seeing controls on such a large monitor array.

Apple finally put ports on the front too. The M1 Max model of the Mac Studio features two USB-C ports (up to 10 Gbps), and the M1 Ultra model replaces those with two Thunderbolt 4 ports. Both models feature an SDXC card slot. 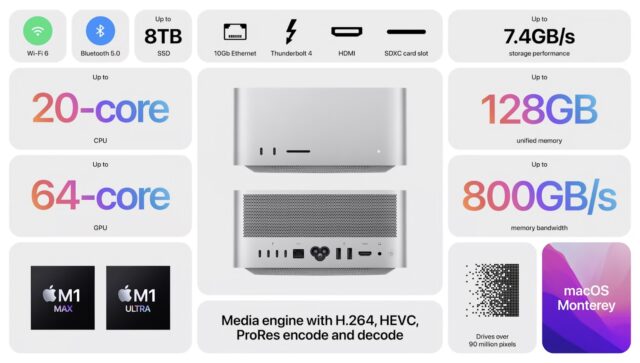 Finally, although it’s probably not a major part of a buying decision, it’s good to see the level to which Apple is emphasizing sustainability and the environment in its manufacturing. 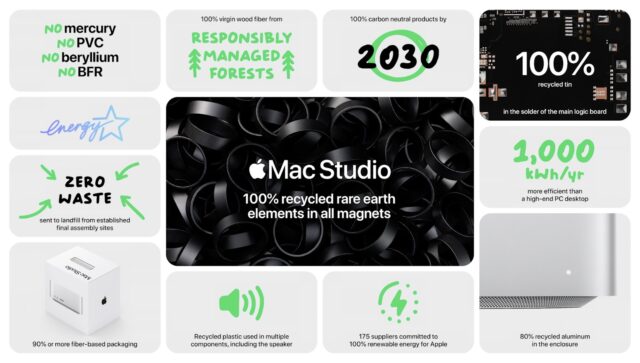 The Mac Studio is available to order now, with shipments starting on 18 March 2022, though within minutes after the Apple event ended, those dates extended into April.

You won’t get a keyboard, mouse, or trackpad with the Mac Studio, but if you order one, Apple prompts to see if you want to replace your existing input devices. Apple also introduced a new silver-and-black Magic Keyboard with Touch ID and Numeric Keypad ($199), Magic Mouse ($99), and Magic Trackpad ($149) designed to complement the design of the Studio Display.

For many of us, I’ve saved the best for last. Lots of Mac users have long lamented the lack of an Apple-designed 5K display, given the quality of the 5K Retina display built into the 27-inch iMac since 2014. Apple’s 2019 introduction of the 6K Pro Display XDR showed that the company was still interested in making displays, but at a $5000 starting price—with another $1000 for the Pro Stand—only high-end video professionals could afford it. The new Studio Display isn’t cheap at $1599, but it will undoubtedly sell vastly more units than the Pro Display XDR has.

To start, the Studio Display is a 27-inch 5K Retina display with a native resolution of 5120-by-2800, the same as the now-discontinued 27-inch iMac. It also supports P3 wide color and True Tone technology, and it’s configurable with nano-texture glass for less reflectivity for an additional $300. The Studio Display bests the iMac in brightness: 600 nits to 500 nits. 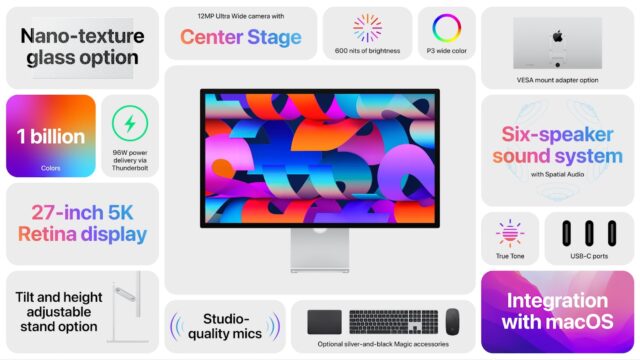 Another improvement comes in adjustability. The 27-inch iMac’s ergonomics were terrible, limited only to tilt. By default, the Studio Display is the same, offering a stand with 30º of tilt (-5º to 25º). But for an extra $400, you can buy a tilt and height-adjustable stand that adds 4.1 inches (105 mm) of height adjustability as well. It would be a lot cheaper to stack up some books instead, but still, it’s nice to have the option. A VESA mount adapter is also a standard option for no additional cost if you’d prefer to attach the Studio Display to a wall or desk mount, stand, or articulating arm. Even better, when you use the VESA mount, you can rotate the Studio Display to portrait orientation. The stand/mount options are not interchangeable, so you can’t swap one for another later, although you can reportedly pay an Apple Authorized Service Provider to do it. 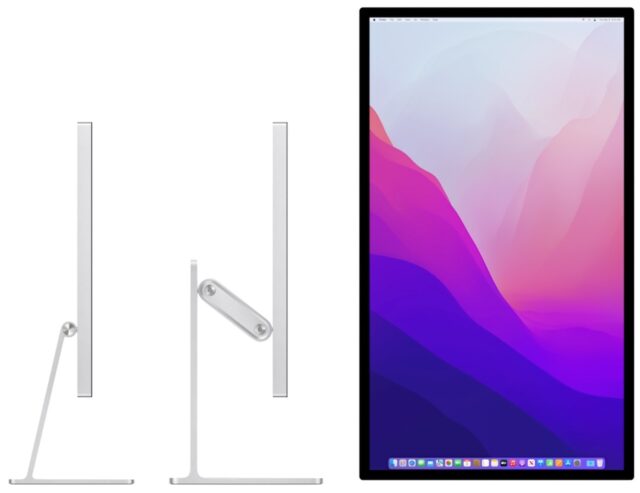 What is most interesting about the Studio Display is that it’s powered by an A13 Bionic chip, which Apple uses to manage the display’s impressive audio and video capabilities. The 1080p FaceTime camera that Apple added to the M1-based Macs may have been a slight step up from the previous 720p camera, but the Studio Display blows it out of the water with a 12-megapixel Ultra Wide camera with 122º field of view. That camera finally brings to the Mac Center Stage, Apple’s auto-framing technology that has previously been restricted to iPads (see “Center Stage Keeps You in the Video Chat Frame,” 23 September 2021).

Backing up that camera for videoconferencing is a three-mic array with directional beamforming and a high-fidelity six-speaker system with four woofers and two tweeters. Apple says it’s the best sound system ever built into a Mac or display, and it even supports spatial audio when playing music or video with Dolby Atmos. Plus, you can use “Hey Siri” with it.

In terms of ports, the Studio Display offers one Thunderbolt 3 port to connect to a Mac—complete with 96-watt charging—and three USB-C ports for connecting peripherals.

In many ways, a Studio Display combined with any M1-based Mac addresses a number of the requests I made in “Apple: Design Macs for Other Types of Professionals.” The Studio Display meets the desire for an affordable (if just) standalone Retina display and provides better ergonomics, including the option to rotate the screen. More ports might be nice, but at least it provides 96-watt charging. And while there’s no Face ID support, it does boast a significantly better camera for videoconferencing, with Center Stage. Color me impressed… and interested.

As with the Mac Studio, the Studio Display is available to order now, with shipments starting on 18 March 2022, though those dates are also already extending into April for the less common build-to-order options.

The 27-inch iMac has been such a bastion of the Mac lineup—and the computer I’ve used nonstop for almost 8 years—that I couldn’t even conceive of Apple dropping it. But drop it Apple did, replacing it with the Studio Display and your choice of M1-based Mac. Which Mac? The Mac Studio may be the most obvious option, but even the MacBook Air, Mac mini, or one of the MacBook Pros would easily best the performance of the most recent 27-inch iMac.

So if a 27-inch iMac no longer holds the sweet spot where performance and screen size/quality intersect, I may have to rethink my usual strategy of combining an inexpensive laptop Mac with a high-performance desktop Mac with dual displays. I don’t think I’d sell all my current gear to get there quickly, but the combination of a pair of Studio Displays and a 14-inch M1 Pro-based MacBook Pro (the least expensive, smallest laptop that can run two external displays) would cost $5612 after taxes. That sounds like a lot, but when I look at the cost of my current 2020 27-inch iMac and M1-based MacBook Air, plus the Thunderbolt Display I bought in 2014, it comes out to a shockingly similar $5587. (My original 2014 27-inch iMac was $620 more expensive yet.) In essence, I’d be paying more for screens and less for computers but getting the same level of overall functionality, given that I only ever use one of my Macs at a time.

But that’s just me. A Studio Display paired with an M1 Ultra-based Mac Studio puts not just the old iMac Pro but also the current Mac Pro to shame. For those who prefer to separate their Mac and their display, combining a Studio Display with a Mac mini is also a good option, though you could save a good bit with a 24-inch iMac. And of course, the Studio Display is perfect for the classic combination of a high-powered laptop Mac that connects to a large monitor when working at a desk. For a full rundown of the options available to those who were waiting for an Apple silicon 27-inch iMac, see “Which Mac Will Replace the 27-iMac for You?” (12 March 2022).

At the end of the day, I’m giving my nod to the Studio Display as the most interesting Mac announcement of the event… and perhaps of the year. With it, Apple has opened up many more possibilities for professional Mac users of all stripes.