Universal Control may be the most-delayed feature of Apple’s 2021 operating systems, only just now appearing in macOS 12.3 Monterey and iPadOS 15.4, but it’s one of the most interesting. Universal Control lets you use a single keyboard and pointing device connected to one Mac to control multiple Macs and iPads. Despite the feature appearing in macOS 12.3 and iPadOS 15.4, Apple labels it as a beta, suggesting that users may still encounter hiccups.

Even for a beta, the experience is nearly seamless. Once you’ve set up Universal Control in System Preferences > Displays, you can move your pointer from one Mac to another Mac or an iPad and back, just as though they were external monitors making up an extended Desktop. Keyboard focus—which device receives typed keystrokes—follows the pointer, so once you move the pointer to another device and click an app, that device behaves just as though you’re using it directly. With an iPad, it acts though you have connected a trackpad and hardware keyboard (see “The iPad Gets Full Trackpad and Mouse Support,” 28 March 2020). Even better, you can drag files and other items between devices.

It’s important to distinguish Universal Control from Sidecar, Apple’s technology for turning an iPad into a secondary display for the Mac (see “Catalina’s Sidecar Turns an iPad into a Second Mac Monitor,” 21 October 2019). Sidecar still exists and, in fact, shares a menu with Universal Control in the Displays preference pane. Similarly, with Macs, you need to differentiate between viewing a screen with AirPlay and controlling it using Universal Control. More on that shortly.

Although we don’t know Universal Control’s provenance, it’s far from a new idea, at least with regard to controlling one Mac from another. Fifteen years ago, Adam Engst used a utility called Teleport that provided exactly these features (see “Tools We Use: Teleport,” 27 August 2007). Even more interestingly, Teleport developer Julien Robert worked for Apple then and reportedly continues to do so. A little birdie tells us that Teleport has even continued to receive private updates inside Apple. It also turns out that Teleport was open-sourced some years ago. John Britton has been maintaining it, providing a Mac-only option for those not running macOS 12.3 everywhere.

With Universal Control, you can connect and control up to three additional devices from your Mac at one time. Mix and match however you would like, whether that means controlling three other Macs, three iPads, two Macs and an iPad, or two iPads and a Mac. We suspect that’s more than enough since it will get difficult to arrange even that many devices in a usable fashion. Remember, Universal Control must be initiated from a Mac, so you need a Mac in the mix somewhere.

Universal Control is simple to set up. On all your Macs, open System Preferences > Displays and click Universal Control. Select all three of the checkboxes. The first one—“Allow your cursor and keyboard to move between any nearby Mac or iPad”—is Universal Control’s primary switch. 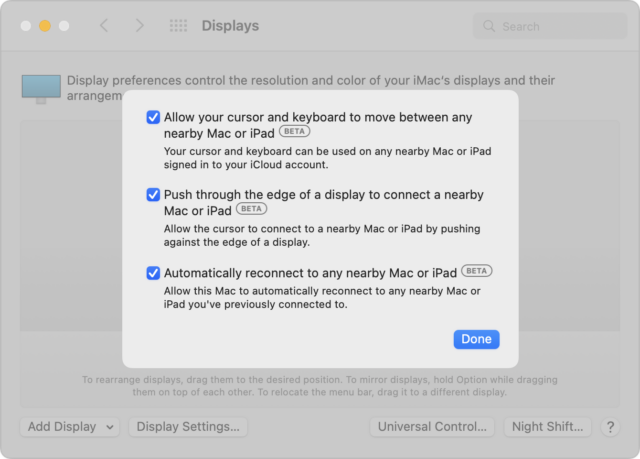 On an iPad, go to Settings > General > AirPlay & Handoff and make sure Cursor and Keyboard is enabled.

That may be all you need to do, thanks to the “Push through the edge of a display to connect to a nearby Mac or iPad” checkbox. When selected, that lets you connect by moving the pointer from your Mac to the other device, just as you’d do with an external display. Available Macs and iPads should appear in System Preferences > Displays.

In the Displays preference pane, you can—and should—drag the display thumbnails around to make them better match their real-world relative positions on your desk. Otherwise, it’s difficult to move the pointer between devices fluidly. Unlike secondary displays, which abut their Mac’s primary display, thumbnails representing Universal Control devices are separated slightly, as you can see below. 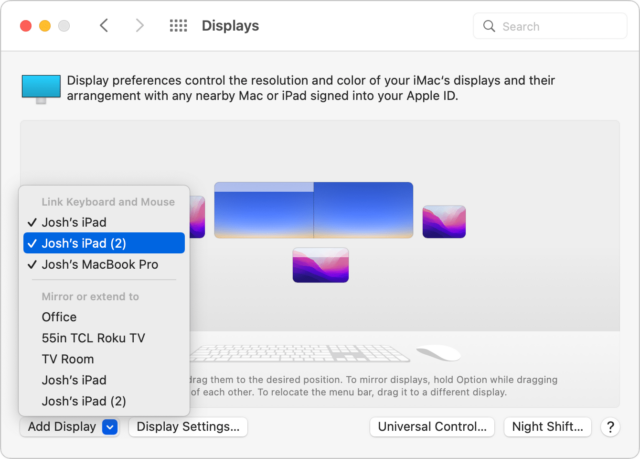 If the desired Mac or iPad doesn’t automatically appear in the Displays preference pane, from the Add Display pop-up menu, select the device you want to control under “Link Keyboard and Mouse.” As long as you’ve selected “Automatically reconnect to any nearby Mac or iPad,” you shouldn’t have to repeat this step.

Note the “Mirror or Extend to” section of the Add Display pop-up menu. That’s how Apple provides access to Sidecar, which lets you use an iPad as a secondary display for the Mac, mirroring or extending its Desktop. You’ll also see Macs running Monterey (which can act as an AirPlay receiver) and Apple TVs in this menu. You can select an iPad or Mac in only one of the two sections at a time. In other words, you can’t control an iPad or Mac via Universal Control while simultaneously using it as a secondary Mac display. That makes sense because Universal Control lets you drive the device’s native interface, whereas Sidecar/AirPlay hides the native interface behind the Mac’s secondary display. There’s no harm in switching back and forth between Universal Control and Sidecar/AirPlay.

If the automatic connection doesn’t work, you can also connect to another Mac or iPad through the Mac’s Control Center by clicking Display and selecting a device under “Link keyboard and mouse to.” The device icons show as gray when they’re merely available and change to blue when you select them. 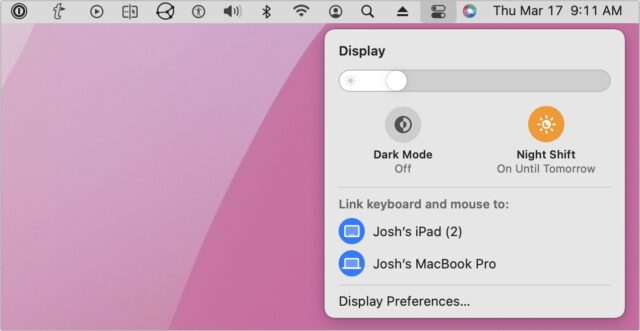 One oddity: The first time I connected to a new device, the Keyboard Setup Assistant appeared on the initiating Mac, presumably because of a mismatch between the new keyboard and the device’s native one. You can click Continue to identify the keyboard or even just click Quit—I saw no issues either way. The Keyboard Setup Assistant never appeared for Adam Engst in his testing, so it must be related to something associated with macOS settings or state. 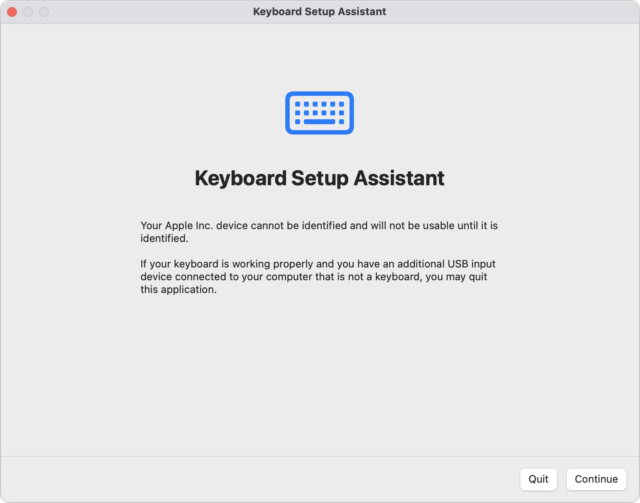 Given that Universal Control remains in beta, it shouldn’t be surprising that there are rough edges. At one point, it wouldn’t let me add a second iPad—telling me I had already reached the limit with two devices—until I put the also-connected MacBook Pro to sleep. After I connected the second iPad, I woke up the MacBook Pro, and all three devices worked fine.

If you’ve ever used multiple monitors on a Mac, Universal Control will seem instantly familiar. Depending on how you have your screens arranged in the Displays preference pane, when you move your pointer off-screen in the direction of another device, the pointer will jump to that device. It works that way both on the Mac and iPad. Once the pointer is on another device’s screen, you can use that device just as though you were controlling it directly.

As you would expect, moving from a Mac to an iPad is a little jarring since the pointer changes from an arrow to a little circle and switches to the iPadOS pointing-device paradigm, which is a hybrid between a traditional pointer and a touchscreen. Most notably, the pointer is attracted to Home screen icons and many other controls, which transform it into a selection highlight. Regardless, in basic usage, Universal Control just works.

Universal Control provides two additional capabilities that make it easy to move data from one device to another. First, you can copy data on one device with Command-C, move the pointer to another device, and paste into an app on the second device with Command-V. The fact that copy-and-paste is foundational technology makes it no less welcome. We don’t know exactly how Universal Control implements clipboard sharing, but it seems faster and more reliable than Apple’s Universal Clipboard technology, which also shares clipboards between your devices.

Second, you can drag and drop items between two Macs or even between a Mac and an iPad. The obvious use is moving files between Macs, but Apple suggests you could also drag a sketch from the iPad to your Mac or move a photo from your Mac into a Messages conversation on your iPad. The Messages example doesn’t make much sense because you could more easily drag into Messages on your Mac.

Since each Mac in a Universal Control set is running independently—additional Macs are not secondary displays—you can’t drag a window from one Mac to another, as you would from a Mac to its external monitor.

Again, we are talking about a beta here. We saw several instances where a remote Mac or iPad stopped accepting clicks or fell out of the Universal Control set entirely. In the case of iPads, putting it to sleep and waking it back up usually fixed the problem. Other times we had to select the recalcitrant device from the Add Displays pop-up menu in the Displays preference pane. We expect most such issues to disappear as Apple updates macOS and iPadOS.

Universal Control: Refilling a Hole in the Universe

Universal Control is a tremendously cool feature, even if it merely brings Teleport back to the masses and extends it to iPadOS. The simple fact of the matter is that Teleport hasn’t been a well-known solution for many years, forcing those who wanted to use the same keyboard and pointing device with multiple Macs to use a hardware switch that could cost $50 to $500, depending on its capabilities.

With Universal Control, Apple is adding a core feature to its ecosystem, one that further integrates different devices. Apple doesn’t want you to replace your Mac with an iPad; it wants you to buy an iPad and a Mac. And now you can use them together more easily than ever before. For many, just being able to flip back and forth between their Macs and iPads will be a huge win—that’s undoubtedly the prime use case.

Some people may see Universal Control as a way to increase screen real estate by using multiple Macs simultaneously. It’s probably not worth buying new Macs for that purpose, but it might be a great way to keep an older MacBook Pro useful after purchasing a new Mac Studio, for instance. The downside is, of course, that you have to keep both Macs up to date and figure out the best way to sync data between them.

Finally, if you’re more iPad-focused than we are, you could also dedicate an iPad on your desk to a single app that either doesn’t exist on the Mac or doesn’t work as well. Universal Control might also be a fluid way to move iPad-only content to the Mac, such as drawings created with an Apple Pencil.

How are you using or planning to use Universal Control? Let us know in the comments.

Comments About Using Universal Control in macOS 12.3 Monterey and iPadOS 15.4