Apple took advantage of its Worldwide Developer Conference keynote today to unveil a pair of low-end laptops powered by the company’s latest chip, the M2. Thanks to second-generation 5-nanometer technology, the M2 extends the already impressive performance per watt of the M1 even further. Apple says the M2 offers 18% faster CPU performance, 35% faster GPU performance—thanks in part to a new 10-core GPU (up from 8-core in the M1)—and 50% more memory bandwidth. The M2 allows up to 24 GB of RAM, up from 16 GB in the M1. 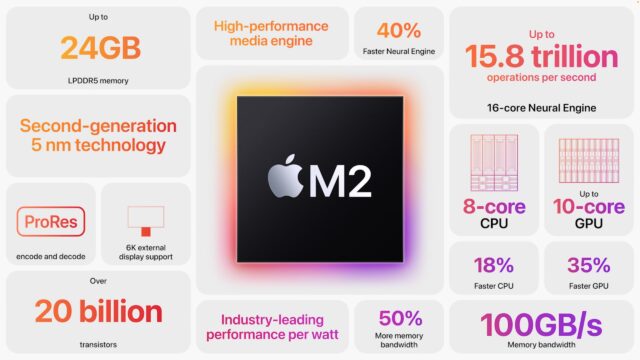 The M2 is larger than its predecessor, with 20 billion transistors—25% more than the M1. Video professionals will appreciate the addition of Apple’s ProRes video engine, which enables playback of multiple streams of both 4K and 8K video, and a higher-bandwidth video decoder in the media engine that supports 8K H.264 and HEVC video.

Although Apple focused on how the M2 stacked up against the M1, we were instantly curious about how the M2 compares with other chips in the M1 family, such as the M1 Pro. Nor did Apple say when it would be releasing M2 Pro, M2 Ultra, and M2 Max variants. Given the relatively recent release of the Mac models that use those chips (see “New 14-inch and 16-inch MacBook Pros Powered by M1 Pro and M1 Max Chips,” 18 October 2021, and “New Mac Studio and Studio Display Change Mac Buying Calculus,” 8 March 2022), it seems likely that we’ll be waiting until the end of this year at the earliest, and more probably until 2023.

Of the two new laptops, the M2-based MacBook Air is by far the more interesting. It’s a complete redesign that trades the previous wedge-shaped form for a rectangular solid with squared-off edges that echo the design of the 24-inch iMac, the iPhone 13, and the latest iPad Air. It’s 0.1 pounds lighter than the M1-based MacBook Air at 2.7 pounds, and it’s substantially thinner—0.44 inches versus 0.63. The width remains the same at 11.97 inches, whereas the model is 0.1 inches deeper at 8.46 inches. It comes in four finishes—silver, space gray, midnight, and starlight—and it gains the highly desirable MagSafe 3 charging technology, which also frees up the second Thunderbolt port while charging. 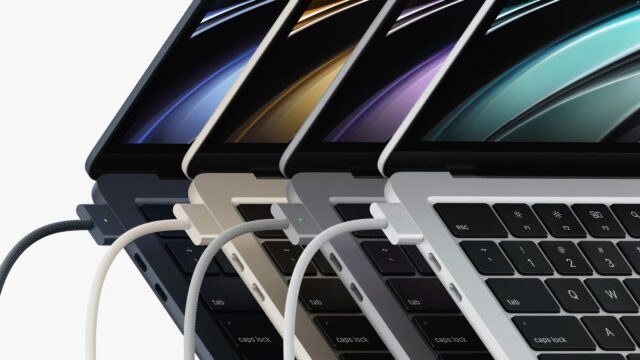 Thanks to thinner borders, it has a larger 13.6-inch Liquid Retina Screen that’s 64 pixels taller than the previous model, boasting a resolution of 2560-by-1664. The screen is also brighter (500 nits, up from 400), and it supports up to 1 billion colors, compared to the “millions of colors” supported by the previous model’s screen. In short, it’s likely to be better, not that the previous screen was a slouch.

Although Apple presents the M2-based MacBook Air as having two models, it’s only a single $1199 model with a second configuration. You can choose from:

A 30-watt USB-C power adapter is included, but you can pay $20 more for either a 35-watt power adapter with two USB-C ports or a 67-watt USB-C power adapter that supports the M2-based MacBook Air’s fast charging capabilities. If you opt for the higher-end M2 chip and at least 512 GB of storage, you can choose from one of the more-capable power adapters for free. Battery life remains the same, although the battery itself is a little larger than its predecessor’s.

Other improvements include a 1080p FaceTime HD camera with an advanced image signal processor that should provide better quality, particularly in low-light situations. It’s still not an impressive camera compared to what’s in even the low-end iPad, but it’s better. Apple also beefed up audio with a four-speaker sound system and support for spatial audio—a three-mic array with directional beamforming remains standard. The new MacBook Air retains the Magic Keyboard with Touch ID but provides a full-height function key row, slightly expanded from the half-height row on the previous MacBook Air. 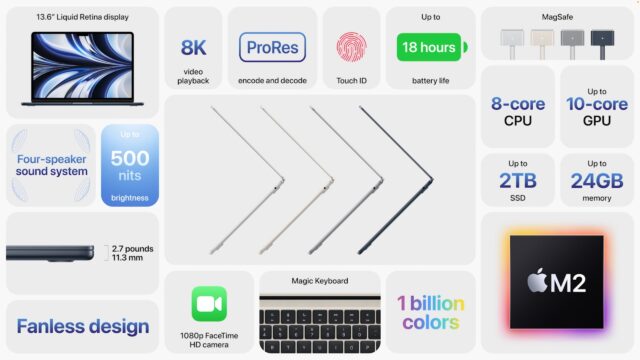 Like the M1-based model, the new MacBook Air supports only a single external display of up to 6K resolution at 60 Hz. Similarly, it retains two Thunderbolt/USB 4 ports on the left side next to the MagSafe port and a 3.5 mm headphone jack on the right side.

Should you upgrade from an M1-based MacBook Air? My initial take is no, the improvements aren’t sufficiently compelling. This is a Mac for those upgrading from an Intel-based Mac laptop or for someone adding the mobility of a laptop to supplement their desktop Mac.

However, that low-end M1-based MacBook Air remains for sale for $999, so those on tight budgets can buy it to save a few hundred dollars. It’s still a fine machine, particularly for a student who won’t be working on video.

Whereas the M2-based MacBook Air was a complete redesign, the $1299 13-inch MacBook Pro merely gets the M2 chip, with prices and nearly all other specs remaining the same. The M2 provides it with additional performance that might exceed an identically configured MacBook Air under sustained load, given that the 13-inch MacBook Pro has cooling fans to avoid thermal throttling that might happen on the fanless MacBook Air.

Apart from the M2’s faster performance and higher memory ceiling, the only other change I see in a glance at the 13-inch MacBook Pro’s tech specs is support for spatial audio. 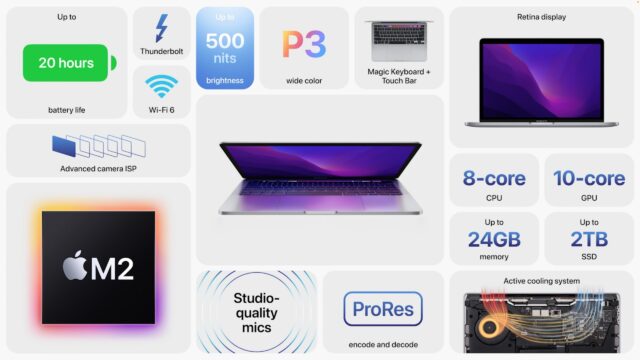 Frankly, I can’t recommend the M2-based 13-inch MacBook Pro over the M2-based MacBook Air. It has an older 720p FaceTime HD camera, and it still has the Touch Bar albatross attached to its keyboard. Its screen is a bit smaller and can’t display as many colors. Only those who anticipate generating sustained loads that will benefit from the fan should consider it, and if you’re in that camp, think about the 14-inch MacBook Pro with an M1 Pro.

One final comment. Although it’s hard to quantify Apple’s efforts to make its products more environmentally responsible, they are extremely important. With regard to both of these M2-based laptops, Apple shared a card touting its work in the sustainability field. Kudos to the company for that and for continuing to work to make its products less damaging to the environment. 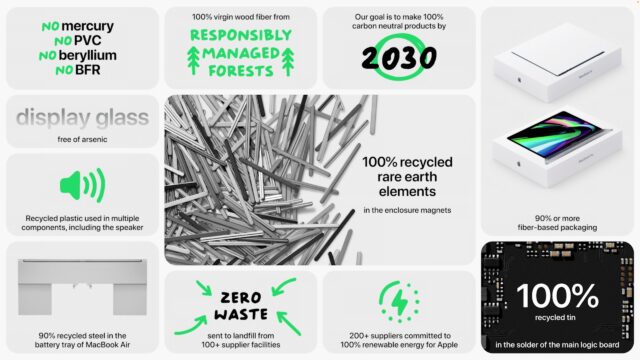 Apple said that both models will be available “next month” but hasn’t given a date when they’ll be available for ordering—at the moment, all you can do is price out different configurations.