There’s just one problem: it requires a high-end iPad with an M1 chip (“The Real System Requirements for Apple’s 2022 Operating Systems,” 9 June 2022). That includes just three current models: the fifth-generation Pad Air, the fifth-generation 12.9-inch iPad Pro, and the third-generation 11-inch iPad Pro. (Stage Manager also works on all Macs that can run macOS 13 Ventura, but even Apple expects the vast majority of Mac users will stick with years of working habits over Stage Manager’s new paradigm.) 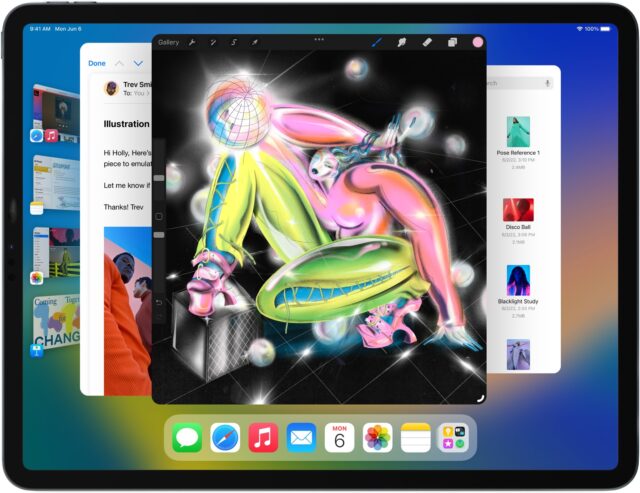 Many users, especially those with recent non-M1 iPads, aren’t happy, and Apple has been on a damage control tour explaining its rationale.

Apple first responded to the controversy in a statement to YouTuber and veteran Apple commentator Rene Ritchie:

Stage Manager is a fully integrated experience that provides all-new windowing experience that is incredibly fast and responsive and allow users to run 8 apps simultaneously across iPad and an external display with up to 6K resolution. Delivering this experience with the immediacy users expect from iPad’s touch-first experience requires large internal memory, incredibly fast storage, and flexible external display I/O, all of which are delivered by iPads with the M1 chip.

In short, Apple says that Stage Manager won’t run on a non-M1 Apple chip. Or at least run well, as Apple’s Craig Federighi explained to Forbes:

We began some of our prototyping involving those systems and it became apparent early on that we couldn’t deliver the experience that that we were designing toward with them. Certainly, we would love to bring any new experience to every device we can, but we also don’t want to hold back the definition of a new experience and not create the best foundation for the future in that experience. And we really could only do that by building on the M1.

Building to M1 was critical as well. From the start, the iPad has always maintained this extremely high standard for responsiveness and interactivity. That directness of interaction in that every app can respond to every touch instantaneously, as if you are touching the real thing underneath the screen. And I think it’s hard sometimes for people to appreciate the technical constraints involved in achieving that.

In short: while Macs can get away with being a little laggy at times, there are no such affordances on the iPad, where the touch interface requires instantaneous response to maintain the illusion that you’re interacting with real objects rather than virtual representations. We’re used to the occasional beachball or pointer stutter on the Mac, but Apple has worked hard to eliminate such issues from the iPad experience. Federighi said that Apple struggled to maintain that level of responsiveness with multiple onscreen apps:

And as you add multiple apps into play, and large amounts of screen real estate, you have to make sure that any one of those apps can respond instantaneously to touch in a way that you don’t have that expectation with a desktop app. Indirect manipulation gives you some slack there, so it’s a different set of constraints.

On a more technical level, he noted:

It’s only the M1 iPads that combined the high DRAM capacity with very high capacity, high performance NAND that allows our virtual memory swap to be super fast. Now that we’re letting you have up to four apps on a panel plus another four — up to eight apps to be instantaneously responsive and have plenty of memory, we just don’t have that ability on the other systems.

We also view Stage Manager as a total experience that involves external display connectivity. And the IO on the M1 supports connectivity that our previous iPads don’t, it can drive 4K, 5K, 6K displays, it can drive them at scaled resolutions. We can’t do that on other iPads.

Finally, you can partially blame the requirement on what the venerable email client Eudora called “trendy 3D junk,” though Federighi couched it in different terms:

We really designed Stage Manager to take full advantage [of the M1]. If you look at the way the apps tilt and shadow and how they animate in and out. To do that at super high frame rates, across very large displays and multiple displays, requires the peak of graphics performance that no one else can deliver.

Could Apple Have Designed Stage Manager to Work on Lesser iPads?

There has been a debate in Apple enthusiast circles about whether Stage Manager truly wouldn’t work on non-M1 iPads or if Apple designed it partly to sell more high-end iPads. Carefully reading Federighi’s statements, I believe both are true. In his TechCrunch interview, Federighi made it clear that Apple didn’t want to limit the feature in any way and is aiming at the future instead of the past:

When you put all this together, we can’t deliver the full Stage Manager experience on any lesser system. I mean, we would love to make it available everywhere we can. But this is what it requires. This is the experience we’re going to carry into the future. We didn’t want to constrain our design to something lesser, we’re setting the benchmark for the future.

In the bluntest terms: Apple could have engineered Stage Manager to work on non-M1 iPads; it just didn’t want to degrade the overall experience to make that happen. This isn’t necessarily nefarious plotting on Apple’s part but rather the standard way Apple makes business decisions. From Apple’s perspective, it’s a total win. Stage Manager:

Apple uses this line of thinking in many areas. For example, its App Tracking Transparency feature, which lets users prevent apps from tracking their behaviors, is a huge privacy win and a strong selling point for the Apple ecosystem. It also happens to weaken competitors like Facebook and strengthen Apple’s own advertising business.

How Apple Could Soothe Developers (And Beleaguered Tech Authors)

Most iPad users aren’t aware of the controversy and will never miss Stage Manager. The iPad gives non-technical users a simple, capable computing device. On the other hand, power users may already own a high-end iPad or do much of their work on a full-featured Mac. Stage Manager is a premium feature aimed at iPad power users, and those who lack an M1 iPad now have reason to invest in one for their next upgrade.

However, developers may resent the M1 requirement even more than users. Developer Steve Troughton-Smith points out that most developers do not own an M1 iPad and the iOS Simulator doesn’t officially support Stage Manager, which will make it hard to optimize apps for Stage Manager. M1 iPad owners may be disappointed to find that Stage Manager doesn’t immediately work as expected with their favorite third-party apps.

Flipside of the Stage Manager/M1 iPad situation: your favorite app dev probably doesn’t have one, either. And, right now, the iOS Simulator doesn’t officially support Stage Manager — so not unreasonable to expect the vast majority of third-party apps won’t, come September, either

Of course, Apple doesn’t care about the last point and often seems to see independent writers as unwelcome competition. But as it stands, I’m in a sticky spot with my follow-up to Take Control of iOS 15 and iPadOS 15, as I only have a base-model iPad from last year, which I bought to test features that required an A12 Bionic. I don’t use my iPad for much apart from testing, so I’m torn as to whether to upgrade, guess how it works based on videos, buy and return an M1 iPad within the 14-day window, or camp out at a distant Apple Store for an afternoon.

Amusingly, it turns out that Stage Manager was originally conceived back in 2006 as a prototype called “shrinkydink,” as documented by a former Apple developer who posted screenshots to show how little it has changed from its initial design. The original post has been taken down (presumably at the behest of Apple Legal), but you can still view an archived version. 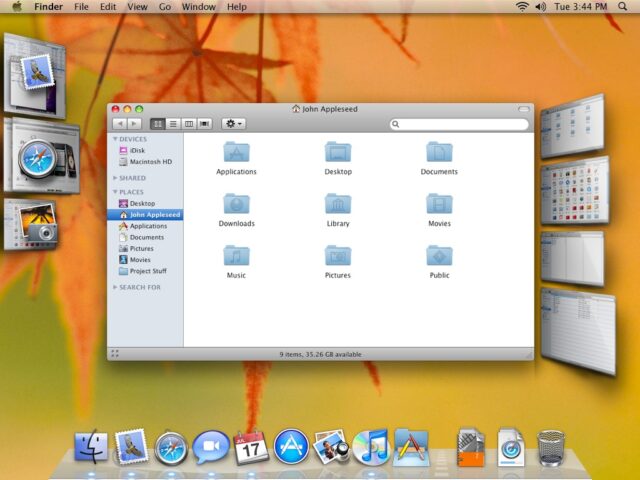