Apple’s Self Service Repair program, which started with iPhone 12 models (see “Apple Launches Self Service Repair Program,” 28 April 2022), has now expanded to M1 MacBook Air and MacBook Pro models. Starting 23 August 2022, you’ll be able to order parts and kits to repair displays, replace batteries, fix trackpads, and perform other common repairs from Apple’s Self Service Repair store (and to reiterate, yes, despite the generic design, that’s a legitimate Apple website). For $49, you can rent a tool kit that includes the same tools Apple uses to perform repairs. 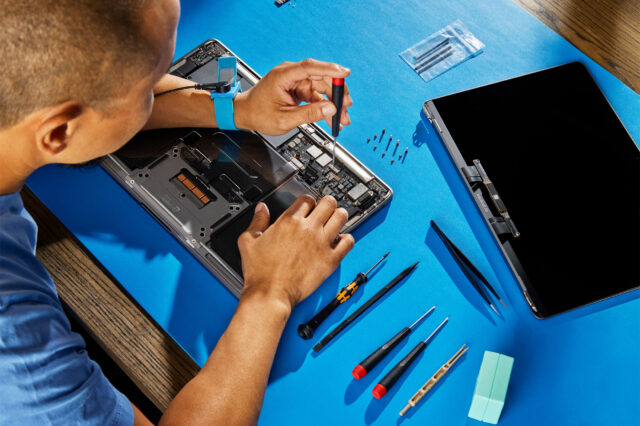 It’s too bad that the Self Service Repair Program doesn’t support older MacBook Air and MacBook Pro units, which are more likely to need repair than the newer M1-based models. Apple says that later this year, it will expand the program to support additional Mac models and open it up to users in other countries, starting in Europe. Perhaps Apple will add the iPhone 13 models too, after the iPhone 14 ships in September.

We’ve found it difficult to recommend repairing your own devices with the Self Service Repair program. The only real advantage is not having to give up your device for as long. Once you rent the tools, you’ll pay as much or more than it would cost to have Apple do the repair. We assume the math for Mac repairs will work out similarly.

Comments About Apple Adds M1 MacBooks to Self Service Repair