I’m still rocking an iPhone 11 Pro after three years, and I’ll probably keep it for another year. I used to upgrade iPhones annually to keep up with the latest advances for TidBITS and my Take Control books, but I became weary of the constant consumption. I’d either keep devices for testing or send them back to Apple, but it still felt wasteful.

I was surprised when Apple sent me an iPhone 14 to try out. I only had it for a few days, but I can confirm: yep, it’s an iPhone. Besides the new iPhone 14 Pro with its Always-On display and Dynamic Island sensor package, iPhones haven’t changed much since the iPhone X introduced Face ID. Every year brings faster processors, better connectivity, and sharper cameras, but since older iPhones were good too, many of us find no compelling reason to upgrade.

While I can’t specifically encourage upgrading from an older iPhone that still meets your needs, if you’re in the market for a new iPhone, I want to highlight some of the improvements I noticed after sitting out the upgrade cycle for a few years. I’m not going to talk about things like screen vibrancy, speed, and battery life, because those are always great on a new iPhone. Here’s what jumped out at me in the few days I had to test.

There also is an important improvement in the iPhone 14 that I didn’t get to see: Apple redesigned the inside to make it easier to repair. That may not play much of a role in your purchasing decision, but it’s certainly a welcome change.

Apple always puts effort into improving the iPhone cameras, and while I’m not seriously involved in photography, my wife and I took some selfies with the iPhone 14 just for kicks. I wasn’t that impressed at first—this photo is fine, but it’s still a bit blown out at the upper right. 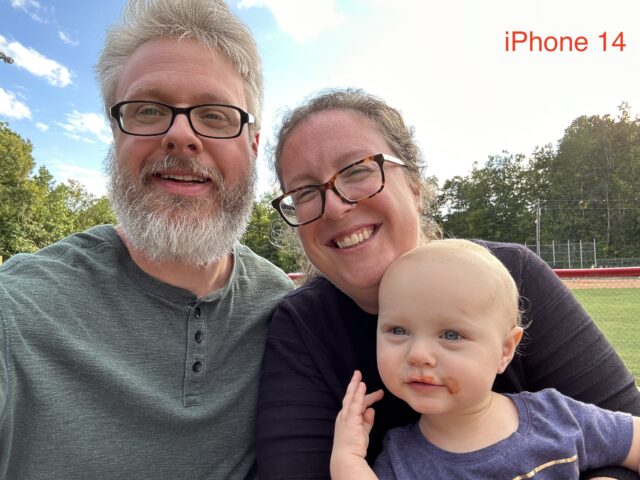 But then I took a similar test photo with my old iPhone 11 Pro. The difference is stark. 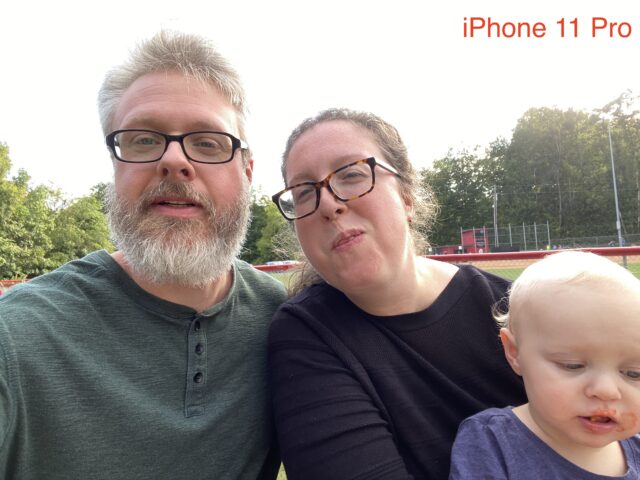 The iPhone 14 may not have been perfect, but it preserved some of the blue sky and clouds in the background, presumably due to Apple’s Deep Fusion technology combining multiple images with different exposures. However, the evening sun completely washes out the sky on the iPhone 11 Pro. The detail of my graying hair also shows up better in the iPhone 14 shot, and there’s less glare on my wife and ketchup-stained daughter. I wouldn’t call these improvements revolutionary, but they’re easily noticeable.

We also played with Photographic Styles, which Apple introduced in the iPhone 13 to let you quickly and easily adjust the color temperature of a photo. I wasn’t blown away by the results. The difference is subtle, and it’s hard to imagine taking the time to check different color temperatures.

As Pam from The Office said, “They’re the same picture.”

Apple promised big improvements to low-light photos and Night mode thanks to its new Photonic Engine pipeline, whatever that is. And the company delivered. Night mode takes a long exposure to capture more light but also makes photos hyper-sensitive to motion. So Night mode photos of fast-moving things like rabbits were often blurry. 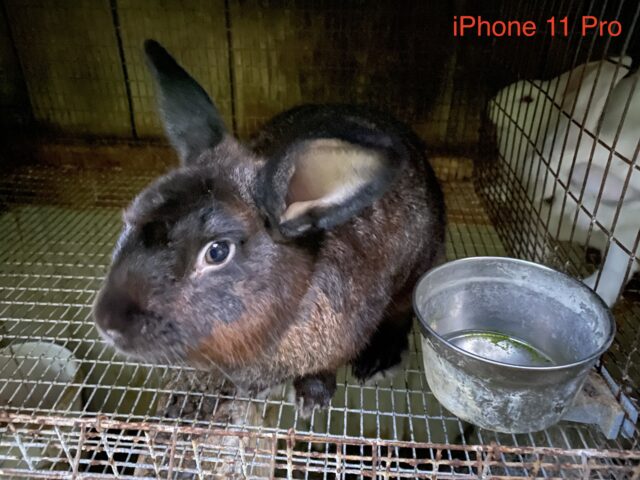 Night mode photos on the iPhone 14 provide a clear improvement in sharpness. If you’re often unhappy with your low-light photos, the iPhone 14 might be worth a look. 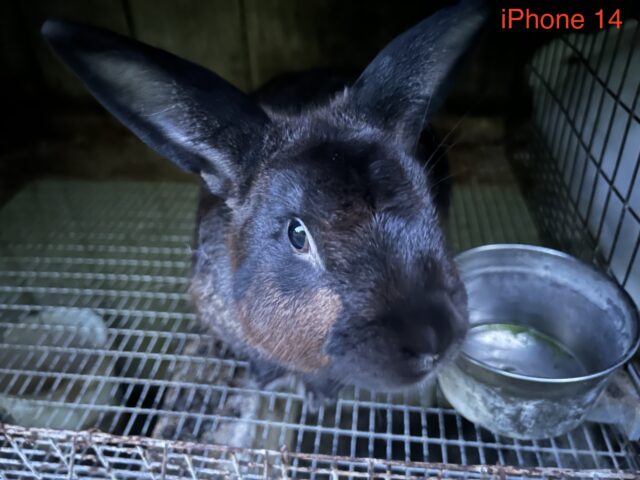 These two safety features are the two most interesting new capabilities of the iPhone 14, but I can’t test either one. Emergency SOS via satellite service won’t be available until November, and crash detection is difficult to test for obvious reasons. (If I had the iPhone 14 for longer, I’d see if I could convince a driver in a local demolition derby to test it for me—sadly, I just missed one across the state at the Tennessee Valley Fair.) I did watch several loud clips of car crashes—since the microphone is one of the sensors that crash detection uses—without experiencing any false positives. I understand that it’s practically impossible to trigger accidentally.

Despite my inability to test crash detection, I think it may be the primary reason to buy an iPhone 14 instead of an older and thus cheaper model. Almost anyone could be in a car crash, and it’s largely out of your control, so is it worth $100 (compared to the otherwise similar iPhone 13) to increase the likelihood that emergency services would be called instantly in the event of a crash? If you’re also shopping for a new Apple Watch, all the current models also have crash detection, so you could instead rely on that for your crash insurance and save a bit by buying the older iPhone.

What Action Mode Does

The iPhone 14 features a new Action mode button in the Camera app that improves the video stabilization to let you capture smoother videos when there’s no way to prevent the iPhone from moving while filming. At least, that’s the theory.

I took multiple sample videos while chasing my kids around. If I didn’t know which was which, I don’t think I could reliably have identified which used Action mode. I was worried I was doing something wrong, so I looked for examples on YouTube, like this one from iJustine. Can you tell the difference? Because I can’t, even when she points it out.

Have you ever seen the movie Zoolander? One of the running gags is that the titular character—a male model—has all these different “looks,” but they’re all identical. At the end of the movie, Will Ferrell’s character snaps, screaming: “Blue Steel, Ferrari, Le Tigre? They’re the same face! Doesn’t anyone notice this?! I feel like I’m taking crazy pills!” The iPhone 14 regularly makes me feel like I’m taking crazy pills.

I decided to push Action mode to the extreme. I took a walk, intentionally shaking the heck out of the camera while filming. Amazingly, when I played the video back, it was smooth as butter, with only a hint of jitter. Aha! Then my 9-year-old son grabbed the iPhone and started running with Action mode enabled. I made him do it again with Action mode off. Check out the difference.

Despite a downgrade in resolution, the results are pretty cool. I would say Action mode would be a killer feature for a certain type of content creator, but folks making YouTube videos professionally or semi-professionally probably already own a gimbal or action cam and wouldn’t accept the sacrifice in resolution Action Mode demands (see “First Look: Insta360 ONE X2 Steady Cam,” 12 February 2021, and note that Insta360 has released several new models since).

People always want to know about the form factor and hand feel, presumably because they’re not using a case. I couldn’t tell you if my last three iPhones were rounded or squared-off because I always protect my iPhones with a case (look, I have kids). If you’re not using one, the iPhone 14’s squared-off sides will likely make it a little less slippery.

Regardless, here’s a quick comparison shot. The iPhone 14 is thicker and more rectangular, while the iPhone 11 Pro is a little thinner and is rounded off. Which do you prefer? (The iPhone 14 is taller and wider too, but that’s just a reflection of its 6.1-inch screen compared to the iPhone 11 Pro’s 5.8-inch screen.) As you can see, there’s still a spot for a SIM card in the iPhone 14, but there’s no tray in US models. Otherwise, from both the front and back, they look pretty similar.

I’m not crazy about the iPhone 14’s switch to eSIM. I appreciate the elegance of not having a little card to lose and another place on the iPhone where water could get in, but it’s not making my life easier. I had hoped to try the iPhone 14 as a phone, which would have been easy if it had accepted my current SIM card. But it doesn’t, and I’m unsure how to make that switch for testing purposes.

Apple reports that my carrier, Consumer Cellular, supports eSIM but has no details, and Consumer Cellular’s site doesn’t explain how to switch service between phones, so I’d have to call customer service. I eventually discovered the setting to transfer the SIM to the iPhone 14 but was told Consumer Cellular does not support it. 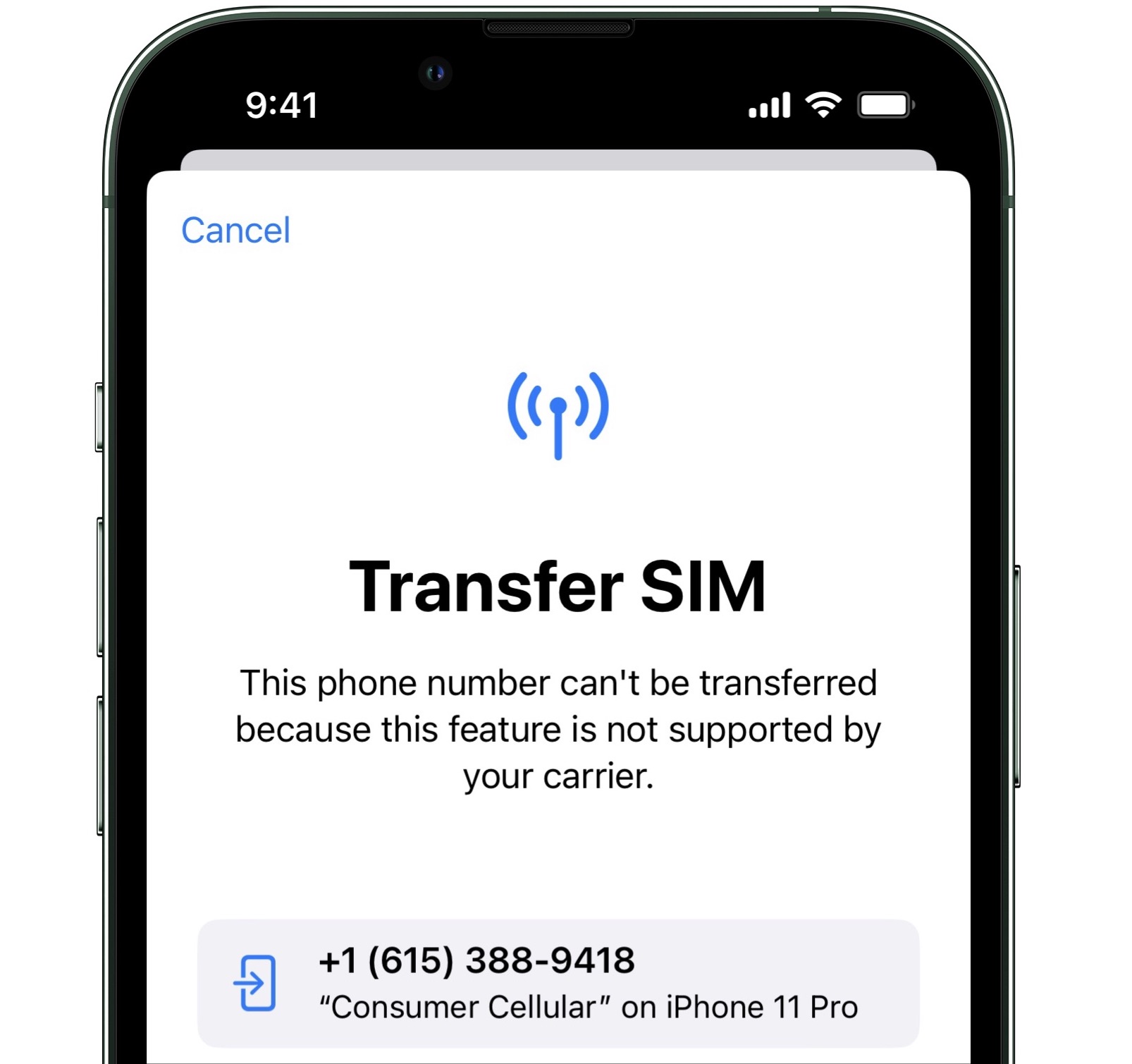 Even if the eSIM transfer would have worked, I would then have had to activate the iPhone 14 and later figure out how to switch back to the iPhone 11 Pro. Given how little time I had with the iPhone 14, it wasn’t worth the headache. It might not even have been possible—I believe my review iPhone 14 was locked to Verizon, which would have precluded testing it with Consumer Cellular.

Aside from the missing zoom, the iPhone 14’s camera is slightly better than the iPhone 11 Pro’s. But filmmakers have been making Hollywood movies with iPhones since the iPhone 5S. Just how much more camera do you need? Night mode has improved, but I mostly find it more irritating than helpful because it kicks in and forces me to remain perfectly still when I least expect it.

For whom does the iPhone 14 make sense? If your existing iPhone is having problems and has aged out of warranty, and you don’t want to spring for the iPhone 14 Pro, it might make sense. However, if you’re seriously budget-constrained, you could save a few hundred dollars on an iPhone 12 or iPhone 13, or even the completely worthwhile iPhone SE. The fact that so many generations of iPhones are available for sale at once indicates that even Apple is aware that the improvements between models are marginal.

But is that a bad thing? For years, I’ve criticized Apple for touting its environmental stance while regularly churning out new hardware that makes the previous year’s model seem obsolete. Much like with Macs, it’s now reasonable to expect an iPhone to last for 4–5 years, likely with a relatively inexpensive battery replacement. That’s less waste in the landfill and more money in your pocket. Plus, since this iPhone is the most repairable in years, it could last you a long time.

Tim Cook wisely saw the writing on the iPhone wall years ago. As we’ve been pointing out every fiscal quarter for the past few years, Apple is increasingly more of a services company, finding new ways to monetize the existing customer base without relying on new hardware sales. Ex-Apple executive Jean-Louis Gassée recently commented on this too.

In essence, Apple no longer cares if you buy a new iPhone every year or even every two years. You’ll buy one eventually, and in the meantime, Apple hopes to sell you as many subscription services as possible.

Comments About iPhone 14 Quick Impressions: Good, but Just Another iPhone