Tonya and I recently traveled to Greece on vacation, and while the trip itself devolved into a tale of COVID-driven woe for me, it did give me a chance to test some new gear: the OneWorld 65 International Adapter with 65W Charger from OneAdaptr. 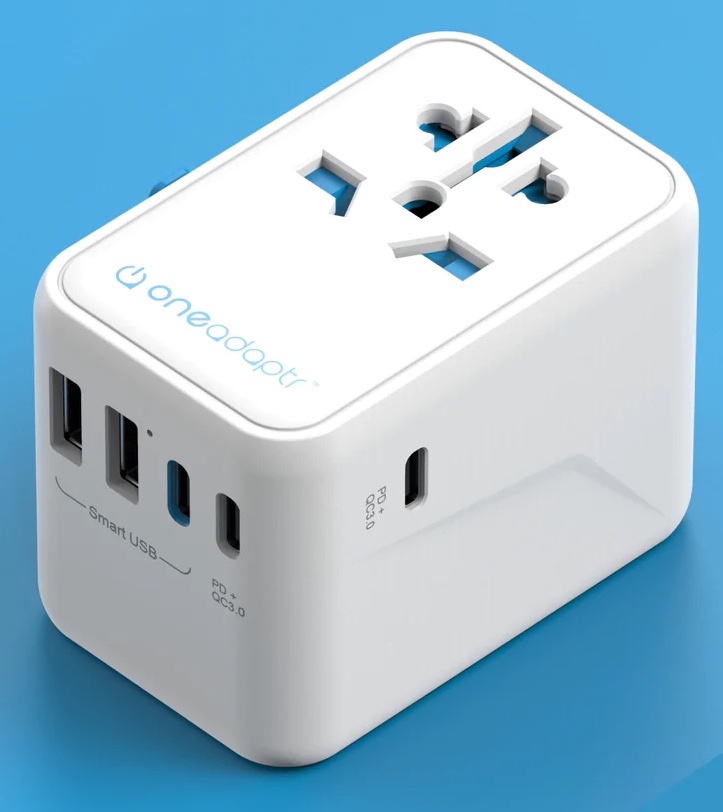 For the past few years, I’ve been using a Saunorch International Travel Power Adapter that provided a universal AC socket with four USB-A charging ports, all in a colorful little cube that could extend plugs to fit into US, UK, European, and Australian power outlets (see “UK Travel Tips: Giffgaff for Cellular and Apple Pay for Transit,” 15 June 2018). It worked fine but felt increasingly dated as more of our devices rely on USB-C.

The OneWorld 65 is a product in much the same vein, but with even more power and flexibility. It too features built-in plugs that you extend using sliders that support US, UK, European, and Australian outlets. In a clever bit of transforming, it combines the US and Australian plug types, allowing the two metal blades to rotate slightly to fit angled Australian jacks. I had no trouble using it in both US and European outlets, although it’s heavy enough that it sometimes felt like it might fall off the wall (but it never did). The plugs retract into the cube so you can toss it into a laptop bag without worrying about poking anything. 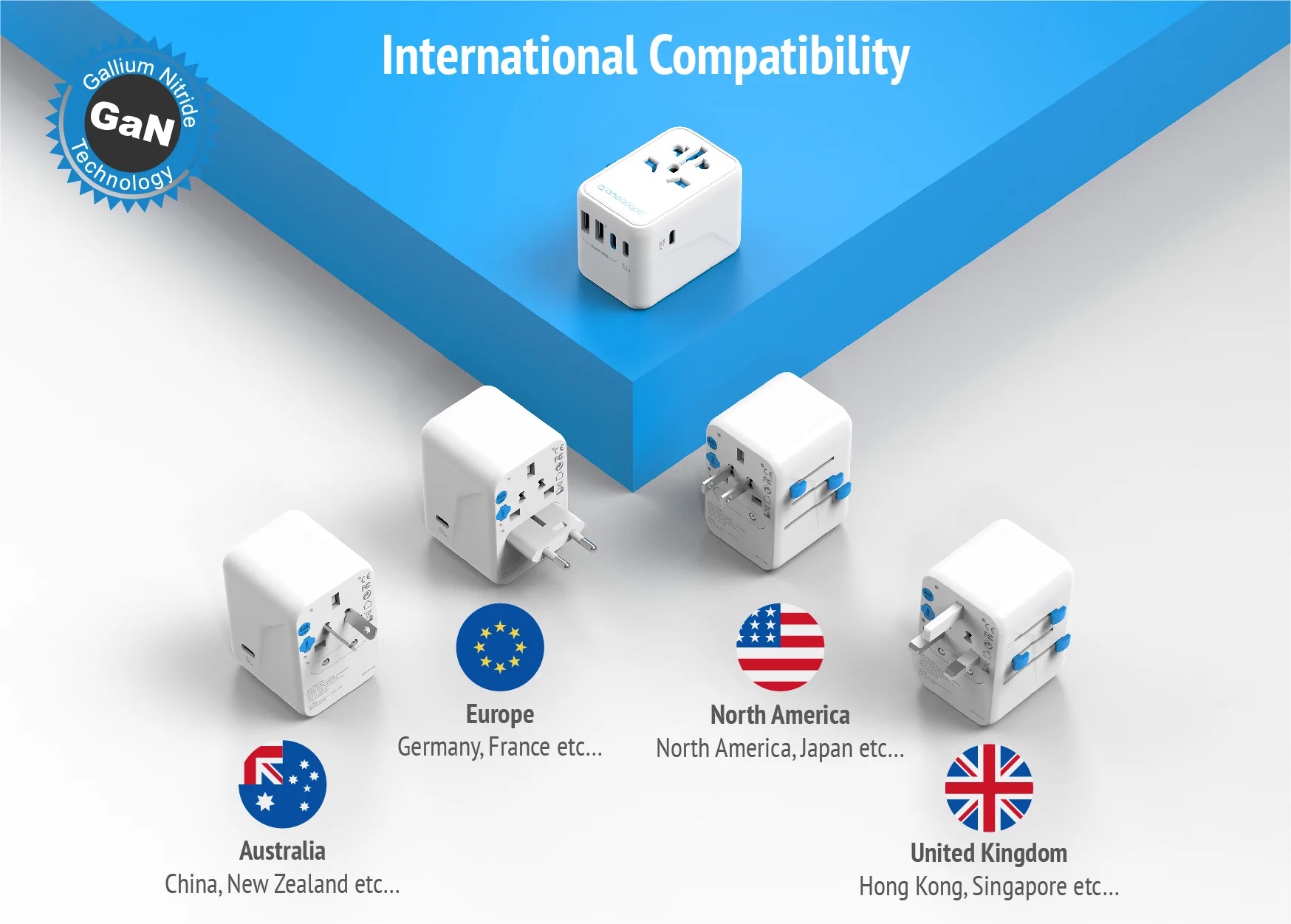 As far as charging ports go, along with the universal AC socket on the front, it features two USB-A ports and two USB-C ports on the bottom, plus a third USB-C port on the side. The universal AC socket supports 100–250V at 10A for up to 2500 watts. The USB-C ports on the bottom can provide up to 15 watts, and the USB-A ports are good for up to 12 watts. The real win is that the side-mounted USB-C port is a 65-watt Power Delivery charging port that worked well to charge my MacBook Air directly, letting me leave its bulky power adapter at home.

The OneWorld 65 can charge six devices at once, although if I’m reading the specs right, the USB-C PD port will drop down to a max of 45 watts at that point. We didn’t have any devices with us that needed to plug into a regular AC outlet, but simultaneously charging five USB devices worked perfectly. I can’t say if the MacBook Air charged more slowly when other devices were attached since it was all happening overnight anyway.

While the mix of port types made things a little easier, we still had to fuss to plug everything in. Our Apple Watch chargers are still USB-A, but we now have USB-C to Lightning cables for our iPhones and AirPods cases. And Tonya’s iPad Air and my MacBook Air both need USB-C cables. It all worked out, though I once used a tiny USB-A to USB-C adapter to get an older Lightning cable to work as well.

Although the OneWorld 65 feels a little chunky compared to my previous power adapter, it’s reasonably sized, given that it’s also a 65W charger. That’s possible thanks to gallium nitride technology, which is all the rage because it enables the creation of smaller, more efficient, and cooler chargers.

My only real criticism of the OneWorld 65 is its blue LED, which is bright in dark hotel rooms. Tonya detests such LEDs, so whenever we travel, she’s constantly draping clothes over whatever items in the room emit light. I was particularly pleased with myself when I found LightDims Black Out Edition on Amazon. For about $7, you get over 100 light-blocking vinyl stickers in various sizes that you can use to cover annoying LEDs (other types merely reduce the light level). They’re reusable and don’t leave a sticky residue, unlike the Band-Aids that Tonya pasted over the previous adapter. She loves the stickers, but unfortunately, the OneWorld 65’s LED is positioned such that light leaks out the USB-A ports as well, where it’s impossible to block. Back to draping clothes over it at night. 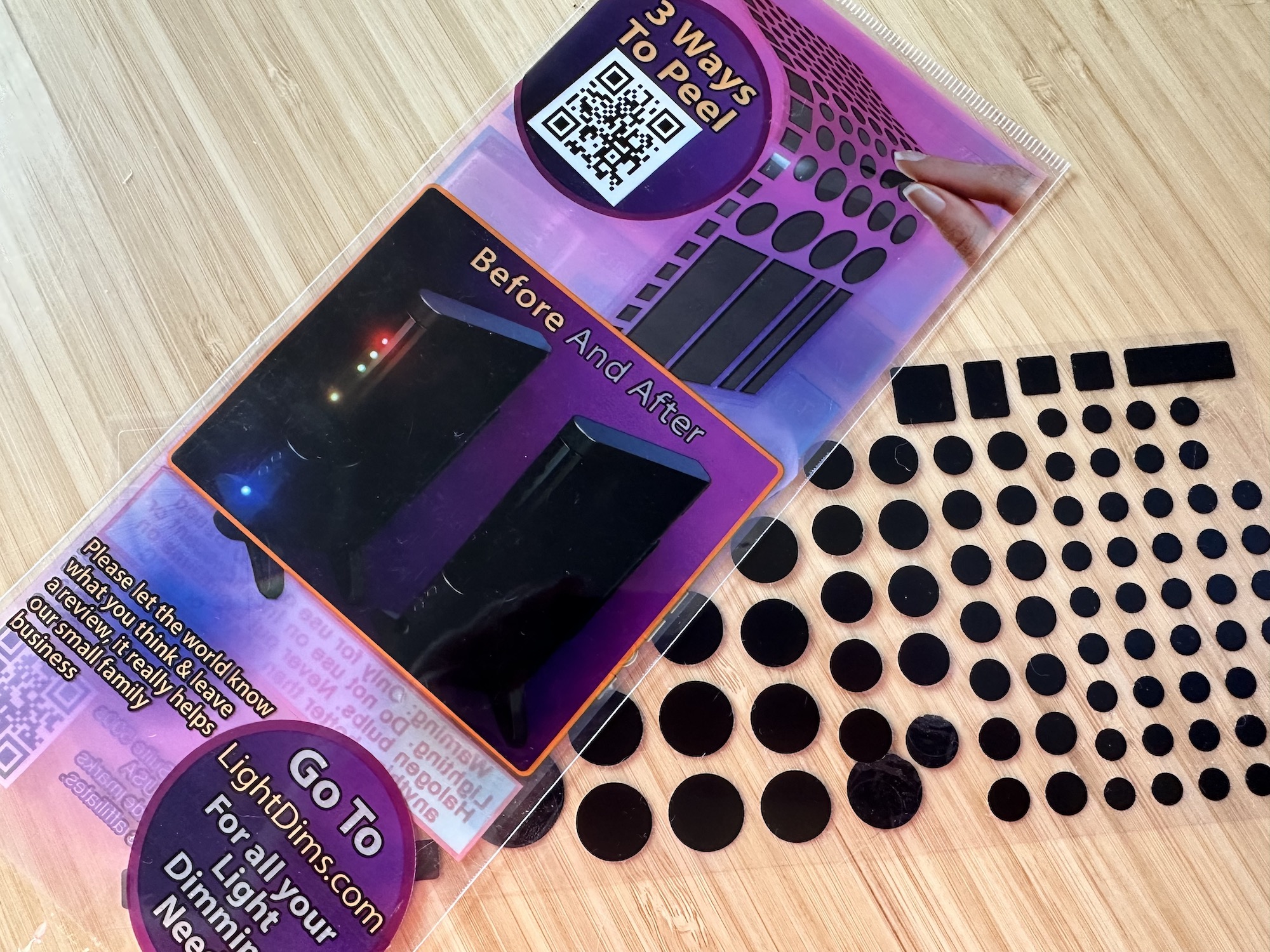 The OneWorld 65 costs $69, which seems like a fair price. You can find both comparable chargers and international adapters for less, but the combination of a 65-watt gallium nitride charger and an international power adapter that can charge up to six devices at once is unusual. I’m planning to use it regularly rather than just when we travel—it’s just as functional as one of Apple’s chargers, the extra USB charging ports are useful, and it even works fine with the magnetic charging nubbins for my pre-MagSafe MacBook Air (see “Are Cheap MagSafe-Like Adapters for USB-C Worthwhile?,” 4 March 2021).