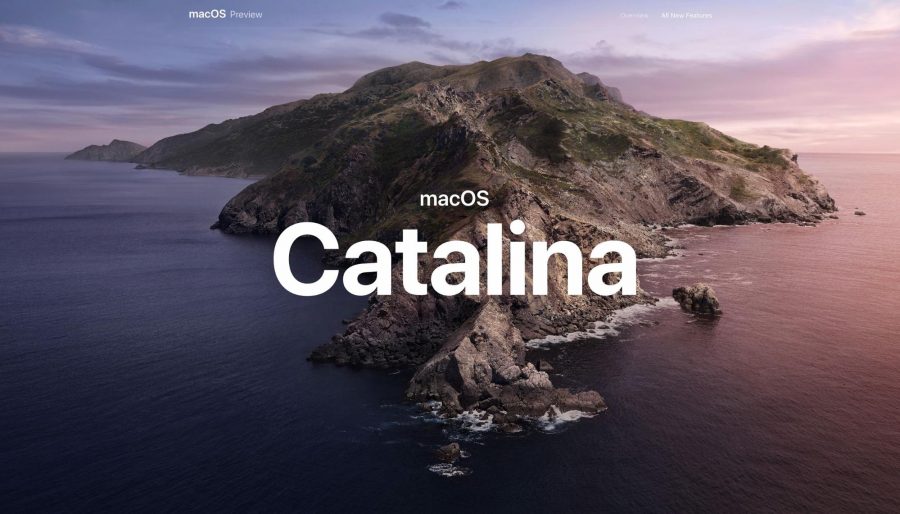 Let’s face it. Macs users are adrift in a sea of iOS devices. Waves of iPhones and iPads break around us, and even an occasional iPod touch floats by. So it shouldn’t be at all surprising that the forthcoming macOS 10.15 Catalina focuses on changes that bring the Mac and iOS closer than ever before.

That’s not to say that Apple is trying to replace the Mac with iOS or remove those unique capabilities of the Mac that make it special. The Mac and macOS remain first-class, vibrant Apple hardware and software platforms. But what we’re not going to see, at least from Apple, are new technologies that set the Mac further apart from its iOS brethren. When it comes to operating systems, it’s safe to say that it’s one for all, and all for Apple.

In today’s Worldwide Developer Conference keynote, Apple’s Craig Federighi whipped through the major changes, most of which revolved around individual apps. Unsurprisingly, those changes largely reflect or are matched by similar changes in the iOS versions, but there were Mac-specific enhancements as well.

Federighi had a fabulous riff where he discussed all the features Apple was planning to add to iTunes—Calendar! Mail! A dock!—before acknowledging that iTunes is dead, Jim. (Cue the music from the Wizard of Oz.) Or rather, it’s dead on the Mac—iTunes will continue to exist, zombie-like, for Windows. 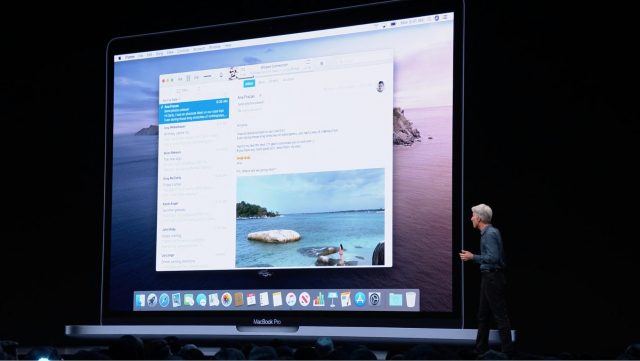 Instead, to match iOS, Apple has split the iTunes feature set into three new apps, called Music, Apple Podcasts, and Apple TV. (In fact, Federighi called Music “Apple Music,” but Apple’s preview page for Catalina calls it just “Music,” which is good since otherwise we’d be talking about subscribing to Apple Music in Apple Music.) 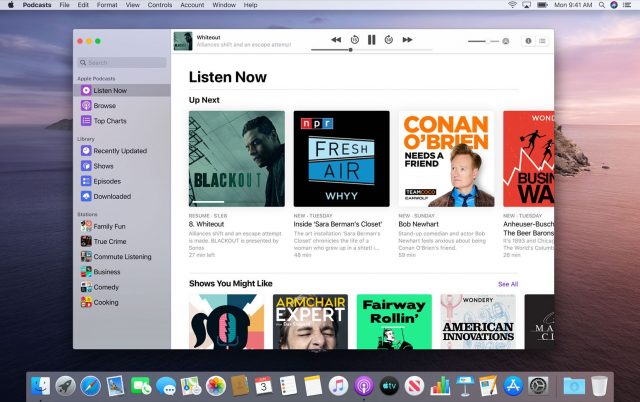 As far as we could tell from the quick presentation, the three apps are similar to their iOS counterparts, although Federighi did say the Apple TV app on the Mac would support 4K HDR video with HDR10 and Dolby Vision and Atmos on sufficiently capable Macs. One new feature—albeit one that extends to the iOS and tvOS versions as well—the Music app’s player can show lyrics in real time as music plays.

What about the syncing features of iTunes? macOS Catalina builds them into the Finder. Attach an iOS device to a Mac and it appears in a Finder window’s sidebar. Select it and what looks like the standard iTunes sync settings screen appears in the window. You won’t get syncing or management of iOS apps, but you’ll be able to back up, update, and restore devices from the Mac. 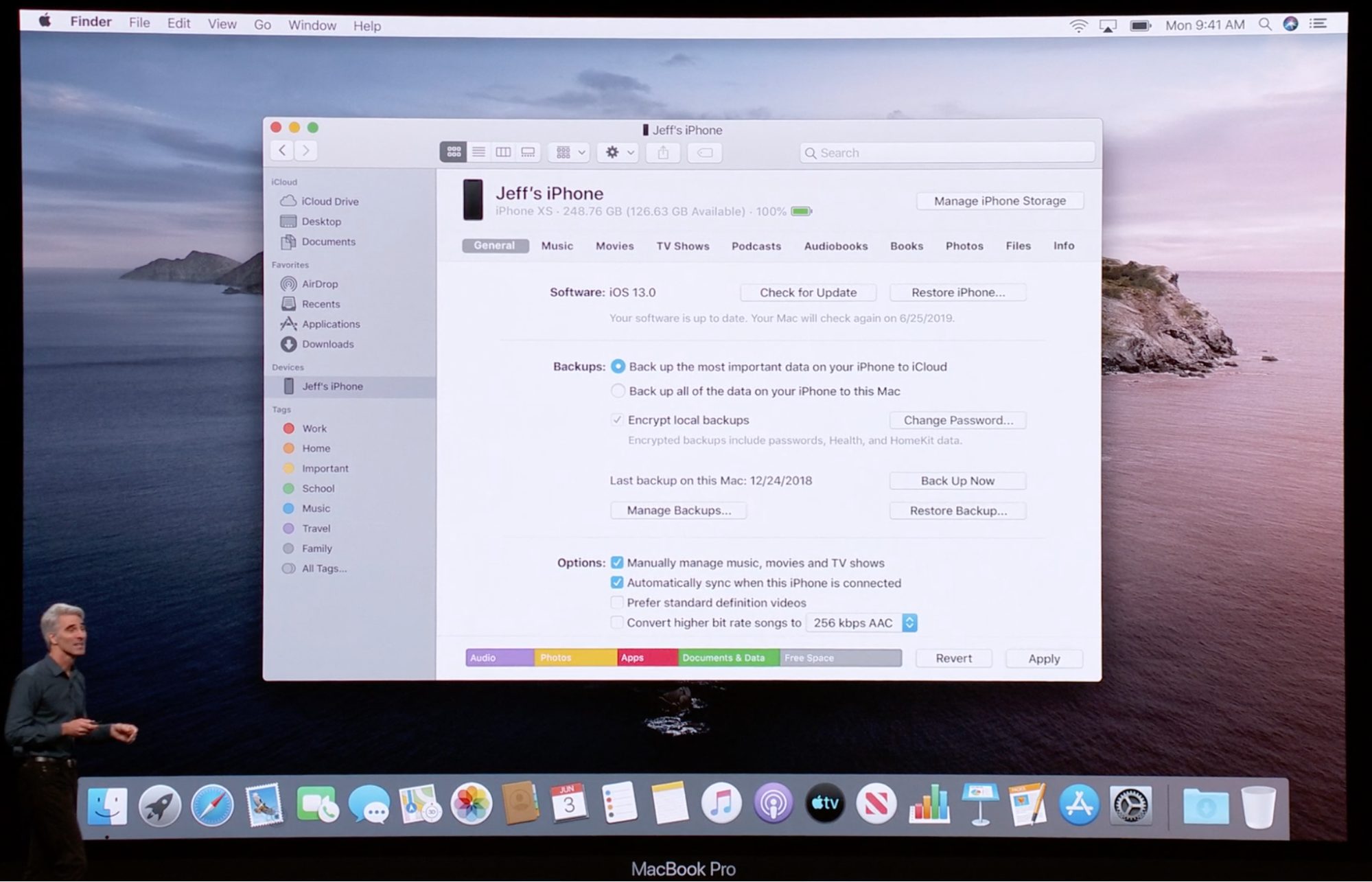 In the “one more new app” category unrelated to iTunes (and again mirrored in iOS), a new Find My app combines the capabilities of Find My iPhone and Find My Friends to display the location of both devices and people. Location-based notifications can now be scheduled for different days of the week and provide more useful place names. Most interestingly, a missing Mac that’s asleep can still report its location via Bluetooth (in a completely encrypted, anonymous way) to nearby Apple devices.

Catalina brings enhancements—some significant, some not—to many of Apple’s included apps. Again, for the most part, these changes also exist in the iOS versions.

Apple continues to tinker with Photos, this time trying a new browsing experience with a lot of machine-learning underpinnings. Previews are now larger to help you distinguish between shots, Photos learns who is in your photos to highlight important shots, and new Day, Month, and Year views summarize what you’ve done in those time frames by eliminating similar pictures and focusing on key images. 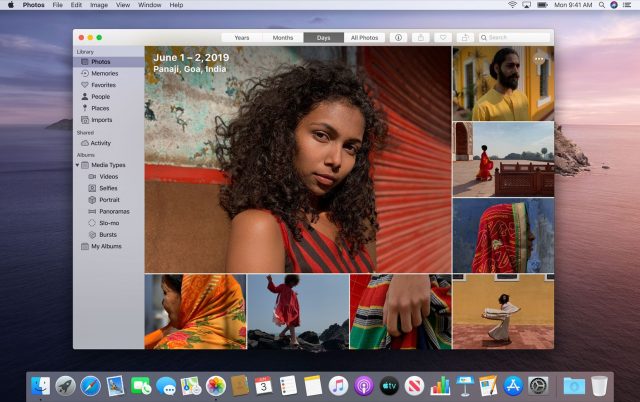 Live Photos and videos now begin playing as you scroll, making them easier to identify and bringing your library to life. You’ll also be able to view Memory movies on your Mac and edit the duration, mood, and title—your edits will sync to other devices if you use iCloud Photos.

We’ve criticized Reminders a number of times (see “Bad Apple #3: Reminders Doesn’t Listen to Siri,” 6 April 2018, and “Bad Apple #4: Reminders Stinks at Sorting,” 3 May 2019) and while it remains to be seen if Apple has addressed those issues specifically, the company has significantly updated the app. A few of the main changes include: 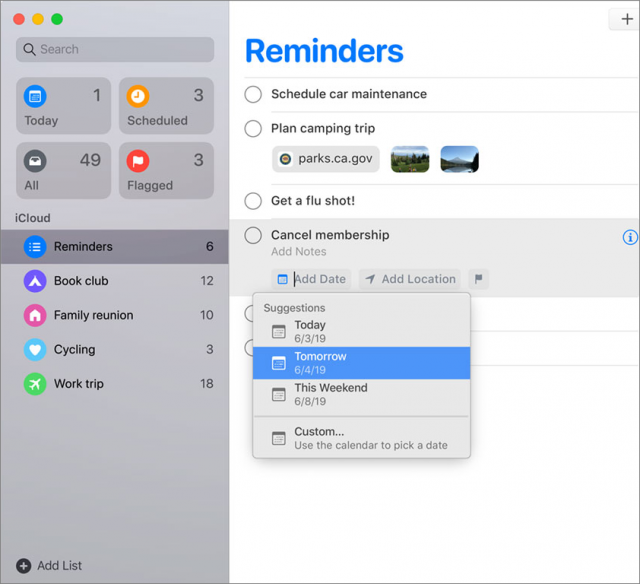 Apple’s Notes app will feature a new gallery view that displays notes as thumbnails, which could help if your notes are largely graphical. It also offers new checklist options that make it easier to reorder checklist items and reuse checklists without having to uncheck each item individually.

Sharing in Notes will improve as well, with a view-only option that lets you share items so everyone else can see what you do without being able to make changes. And if you do a lot of sharing, you can share entire folders rather than just individual notes, either with full access or view-only permissions.

Not much has changed in Safari, but Catalina brings an updated start page, makes it easier to enable Picture in Picture, warns you about weak passwords, and directs you to open tabs that match the URL of a site that you’re typing.

As with Safari, Mail’s changes are fairly minor. It will be able to block all messages from specified senders and move their messages to the trash. Or, if that’s too extreme, you can mute threads that are being overly active. Finally, mailing list messages will get an Unsubscribe link above the header.

Another technology that Apple is bringing from iOS to macOS with Catalina is Screen Time, which tracks and reports on your usage, and lets you set usage limits. It’s a welcome move since parental controls in macOS had been ignored for years. Screen Time on the Mac will provide the same set of Downtime and App Limits as in iOS, and if you use iCloud, it will sync the same settings across all your devices. A feature that seems to be new is the concept of “combined limits” that bring together a combination of app categories, specific apps, and Web sites. 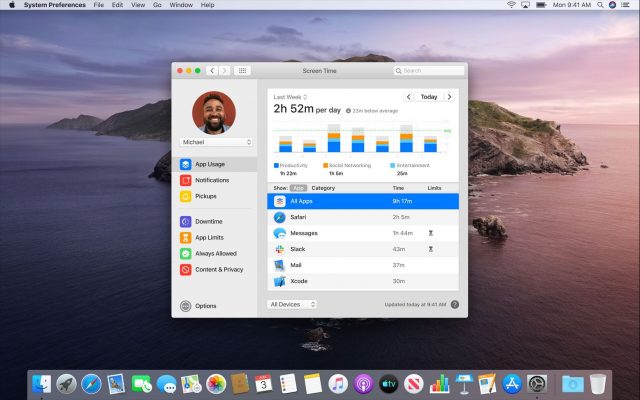 Parents will appreciate Screen Time’s new capability to manage contacts and set communication limits, and if you have Family Sharing turned on, you’ll be able to configure and manage Screen Time from any device for your kids on all their devices.

Everyone who uses Screen Time limits will like the new “One more minute” option that gives you another 60 seconds to finish up what you’re doing.

With the new Sidecar feature, Apple is bringing Macs and iPads closer together… literally. Much like solutions such as AirDisplay, DisplayLink, Duet Display, and Luna Display, Sidecar lets you turn an iPad into a secondary display and graphics tablet for your Mac. (Our condolences to the developers of the other screen-sharing apps, who have just been Sherlocked.)

Sidecar will work wirelessly or over a wired connection, and our bet is that the latter will provide better performance. You can use it either to extend your desktop for more screen real estate or to mirror your screen so others can see what you’re doing.

Standard Multi-Touch gestures will work on the iPad while it’s displaying text from a Mac app, even the new text-editing gestures in iPadOS. And finally, apps with Touch Bar support will display Touch Bar controls at the bottom of the iPad screen even on Macs that don’t have a Touch Bar.

If you’re looking forward to Sidecar, you may want to pick up something like a Mountie (see “Attach an iPad to Your MacBook as a Second Display with Mountie,” 22 February 2019).

With Mojave, Apple gave us Mac versions of Home, News, Stocks, and Voice Memos, thanks to a technology codenamed “Marzipan” that made it easy to convert an iOS app to macOS. That was the first phase of Apple’s master plan, and with Catalina, we’re moving into the second phase. The technology now has a real name—Project Catalyst—and this year developers are getting access to the Catalyst technology to create Mac versions of iOS apps.

Several prominent third-party developers were quoted on stage as to how quick and easy it was to make a Mac version of an iPad app, maintaining a single code base and with the same development team. I expect nothing less from a keynote.

What remains to be seen, however, is if Apple has enhanced the Catalyst technology sufficiently so the Mac apps built with it don’t suck. Home, News, Stocks, and Voice Memos run, but they’re lousy Mac apps.

That will mostly be an issue with productivity apps that we expect to look, walk, talk, and quack like Mac apps. For games and Web apps, just having something native on the Mac rather than having to switch devices or run in a browser tab will be welcome.

Apple continues to improve the security of its platforms, and Catalina receives some enhancements in that area:

The feature that most intrigues me is that Catalina will let you approve any dialog that asks for your Mac’s login password by double-clicking the side button on your Apple Watch. At last!

Happily, it seems Apple was listening, since Catalina features a slew of accessibility improvements, including everything Scheresky asked for. The new Voice Control capability offers full control over your Mac and any iOS devices. You can rely entirely on your voice to navigate an app via navigation commands, names of accessibility labels, numbers pointing at controls, and grids.

Anyone interested in reducing their typing will appreciate Voice Control’s enhanced dictation, and it builds in a rich set of text-editing commands that let you correct words, replace phrases by name, select text, or navigate within text. Even better, if you wish to use voice commands to control your Mac, it will seamlessly transition between text dictation and commands.

Frankly, Voice Control may be one of the most important improvements in Catalina and iOS 13.

But that’s not all the accessibility improvements in Catalina, others of which include:

As you would expect, Apple has plenty of other small features slated for Catalina. The most interesting ones include:

Betas of macOS Catalina for developers are available now, and Tim Cook said that a public beta would arrive in July 2019, with the final release due in the “fall,” probably meaning September of this year.

Comments About No Mac Is an Island with macOS Catalina