Hard on the heels of March’s update to the MacBook Air, Apple has updated the 13-inch MacBook Pro, marking the official end of the much-maligned butterfly keyboard. Apple has also doubled the standard amount of flash storage to 256 GB. The new MacBook Pro comes in silver or space gray. 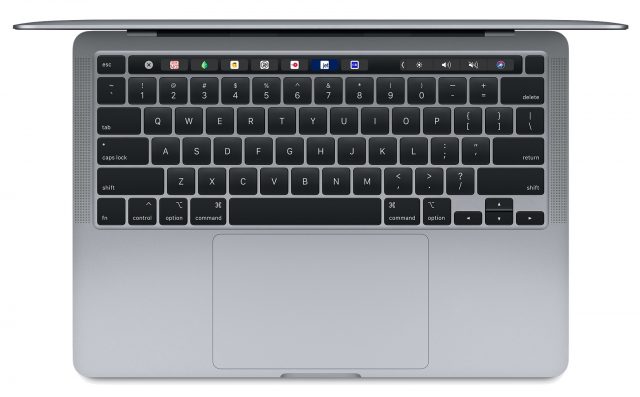 Rumors had suggested that Apple would replace the 13-inch MacBook Pro with a model featuring a 14-inch screen, much the way the 16-inch MacBook Pro replaced the previous 15-inch model. Those rumors proved either to be wishful thinking or to apply to a future, more significant revision to Apple’s smaller MacBook Pro model. It’s not inconceivable that we could see such a product late this year—in 2019, Apple updated the 15-inch MacBook Pro in May before replacing it in November.

Like the 16-inch MacBook Pro, the new 13-inch model features a physical Escape key, a Touch Bar, and an independent Touch ID sensor. We aren’t huge fans of the Touch Bar, but like that slightly annoying friend-of-a-friend, it seems unlikely to be leaving the party anytime soon.

The second notable change revolves around the size of the internal storage. Previously, the 13-inch MacBook Pro’s storage choices started at 128 GB. Now, the low end begins at 256 GB, and every standard configuration offers twice as much storage for the same price. Build-to-order options for 512 GB, 1 TB, and 2 TB remain available. A 4 TB option is also available for the higher-end models—more on those next.

And of course, in the spec that I’m sure someone at Apple is embarrassed by in these days of constant video calls, the new models sport the same inferior 720p FaceTime HD camera (see “The 2020 MacBook Air’s FaceTime HD Camera Is Still Lousy,” 8 April 2020).

The low-end 13-inch MacBook Pro with two Thunderbolt 3 ports starts at $1299, and the higher-end model with four Thunderbolt 3 ports starts at $1799. In many ways, these are two completely different products. The lower-end models have barely changed, apart from the new Magic Keyboard and more storage, whereas the higher-end models receive a modest speed and spec bump with faster processors, better graphics, more RAM, more storage options, and so on.

If you want a small, fast MacBook Pro, buy one of the higher-end models today. They’re better than last year’s models and boast improved specs, making them cheaper as well.

Regardless, what’s most important is that the butterfly keyboard is now pushing up daisies, rather than flitting among them. If you’ve been delaying the purchase of a MacBook of any sort until you could see how things sorted out with the Magic Keyboard-equipped models, the possible choices are now clear.

Personally, once I have need for a laptop again, I’m getting a MacBook Air, since I rely heavily on physical function keys to switch between apps.