Is it time to upgrade to macOS 11 Big Sur? I’ll write more about that soon. However, there is one general concern that has caused us to hesitate to recommend upgrading. That’s the complexity of creating a bootable duplicate of your startup volume, also known as a clone. To understand why this seemingly simple task—just read all the data from one drive and write it to another—is causing such consternation, we need to step back briefly. And once we’ve done that, we can reassess the role of a bootable duplicate in a modern backup strategy.

Why Bootable Duplicates Have Become Difficult to Make

In 10.15 Catalina, Apple introduced APFS volume groups, a way of bundling separate volumes together to create a bootable macOS. A System volume holds all the files macOS needs to operate, while the Data volume contains only your data. The two volumes appear as a single entity in the Finder and wherever you might select or navigate files. The System volume is also read-only, so malicious software cannot modify the operating system, whereas the Data volume that contains your files remains read-write so you can install apps and create and modify documents.

This architectural change forced backup apps that make bootable duplicates to jump through hoops, since they couldn’t just read and write data anymore. Now a bootable duplicate had to have a System and a Data volume, and they had to be combined correctly into an APFS volume group. Eventually, all the leading apps figured out how to do this: see “Carbon Copy Cloner 5.1.10” (26 August 2019), “ChronoSync 4.9.5 and ChronoAgent 1.9.3” (11 October 2019), and “SuperDuper 3.3” (30 November 2019).

With Big Sur, however, Apple went a step further, adding strong cryptographic protections when storing system content on what is now called a Signed System Volume. (In fact, Big Sur doesn’t even read files directly from this System volume to boot your Mac. It first takes the additional step of creating an immutable APFS snapshot—a reference to the volume at a particular point in time—and starts up from that snapshot. Thus, Big Sur is actually booting from a cryptographically signed, immutable reference to a cryptographically signed read-only volume.)

This change increases security even more, but it also prevents all backup apps from creating bootable duplicates because they cannot sign the backed-up System volume. In theory, Apple’s asr (Apple Software Restore) tool makes this possible, but it didn’t work at all until just before Big Sur was released, still has problems, and even now cannot make a bootable duplicate of an M1-based Mac boot drive. On the plus side, Apple has said it plans to fix asr, but who knows when, or how completely, that will happen.

Things become even more confusing if you add an M1-based Mac into the mix. At the moment, Howard Oakley reports that you can make a bootable duplicate only onto a native Thunderbolt 3 drive—a USB drive doesn’t work reliably for the purpose. That bootable drive also won’t start up Intel-based Macs, even if you set up separate APFS containers. The reverse is true as well—an external drive that will boot an Intel-based Mac will not necessarily boot an M1-based Mac. So, even if you can make one, a bootable duplicate won’t help you unless every Mac you want to use it with uses the same chip. 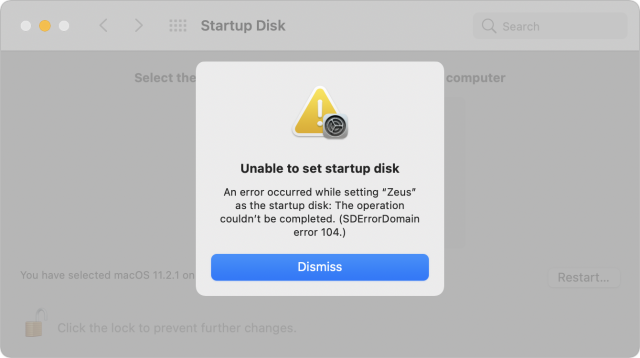 Do You Need a Bootable Duplicate?

Sometimes, when the world shifts in a way that renders past approaches unsatisfying, it’s worth reexamining the base principles in play. Why have we recommended bootable duplicates as part of a backup strategy anyway? Three reasons:

When you think about it, only the first of these reasons requires that the duplicate be bootable. A data-only backup using different software to a separate drive is sufficient for the second two.

The last time I needed to boot from my bootable duplicate was a disaster (see “Six Lessons Learned from Dealing with an iMac’s Dead SSD,” 27 April 2020). I had been backing up to a 5400 rpm hard drive connected to a 2014 27-inch iMac via USB 3.0, but using it as a boot drive was “painful beyond belief.” Since then, I’ve switched to using a Samsung T5 external SSD for my bootable duplicate because its performance is so much better.

Performance isn’t the only issue here. When my internal SSD died, I spent many hours troubleshooting the problem before discovering that my bootable duplicate wasn’t going to help. I suspect that’s common—you don’t necessarily know that your internal drive is dead right away, so you’re going to try to fix it before falling back on your bootable duplicate. Quick recovery? I could easily have reformatted my internal SSD and restored from a backup in the amount of time I spent troubleshooting. In fact, I started down that road too, only to discover that I couldn’t even reformat, wasting even more time.

In the end, I got up and running with my everyday work using other devices: my 2012 MacBook Air, 10.5-inch iPad Pro, and iPhone 11 Pro. Most of what I do is in the cloud now, between email, Slack, Google Docs, and WordPress, so while I wasn’t as productive on the other devices as I would have been on the faster, double-monitor iMac, I could get my work done. Since then, I’ve replaced the 2012 MacBook Air with an M1-based MacBook Air with more storage and vastly better performance, so I would have even fewer issues using it as my fallback Mac.

All this is to suggest that the bootable part of a bootable duplicate is no longer as essential for many people as it was when we first started recommending that a comprehensive backup strategy should include one. Since then, it has become far more common for people to have multiple devices on which they could accomplish their work, and much more of that work takes place in the cloud or on a remote server.

The Parts of a Modern Backup Strategy

Allow me to update what I consider to be the pieces you can assemble into a comprehensive backup strategy that acknowledges the reality of today’s tech world. In order of importance:

Ensuring that you have an answer for all five options above would provide the most protection and the fastest recovery. But for many people, all five would be overkill.

I’d say that every Mac user should be making Time Machine backups, and some combination of Internet backup or cloud-based storage of data is a good idea. If your house were to burn down, wouldn’t it be nice if you didn’t lose your entire photo collection? iCloud Photos isn’t a full backup like Backblaze is, but either would ensure the survival of your irreplaceable photos and videos.

People whose livelihoods depend on their ability to meet tight deadlines might feel the need to have a relatively powerful backup Mac available at a moment’s notice, but for many people, an older Mac or less powerful laptop might be sufficient. For those who don’t rely on their Macs for work, an iPhone or iPad might meet all your communications needs until you can repair or replace a dead Mac. Also, remember that you can buy a new Mac from Apple and return it within 14 days, something that Apple Store employees reportedly recommend as a way to get up and running while waiting for a repair.

Similarly, those who keep a lot of data in the cloud or simply don’t value their data all that highly might be willing to risk having Time Machine be their only backup.

That said, I’ll stick with my nightly duplicates because they’re just too useful for troubleshooting and recovery. But I can’t say that bootable duplicates are the necessity they once were.

What do you think? How often have you relied on a bootable duplicate to return to work quickly after an internal drive failure? Have you been stressing about bootable duplicates in Big Sur? How would you respond to your Mac failing entirely?