Siri is an imperfect but workable means to tap into Apple Music’s vast library. It’s certainly possible to use voice queries instead of a visual interface to queue up artists, albums, tracks, and playlists, assuming you can think of what to listen to without a visual reminder.

But what if Siri were the primary way for you to search for music, with browsing and searching options eliminated or drastically curtailed?

Since its release, I’ve been using the $4.99-per-month Apple Music Voice Plan and have found Siri to be surprisingly competent in fielding my music requests. Before this, I had never been much of a Siri user since I don’t like using my voice for tasks I can readily accomplish on my iPhone. Even so, forcing myself to use Siri with the Voice Plan has persuaded me that a Siri-centric music service could be a decent choice for certain kinds of people. To my surprise, I’ve enjoyed using Apple Music via Siri—even with the other Voice Plan limitations—and I may even decide to stick with it.

When weighing the question of whether to subscribe to the Apple Music Voice Plan (if you’re new to Apple Music) or downgrade from the full-featured $9.99-a month tier as a cost-saving move, you’ll need to understand what the Siri-centric Voice Plan can and can’t do.

Getting Started with the Apple Music Voice Plan

You can subscribe to the Apple Music Voice Plan using Siri itself on an iPhone, iPad, Mac, or Apple TV. After you sign up, you can use Apple Music (with Voice Plan limitations) from any Siri-compatible Apple device, including AirPods, the Apple Watch, HomePods, and CarPlay-enabled vehicles. 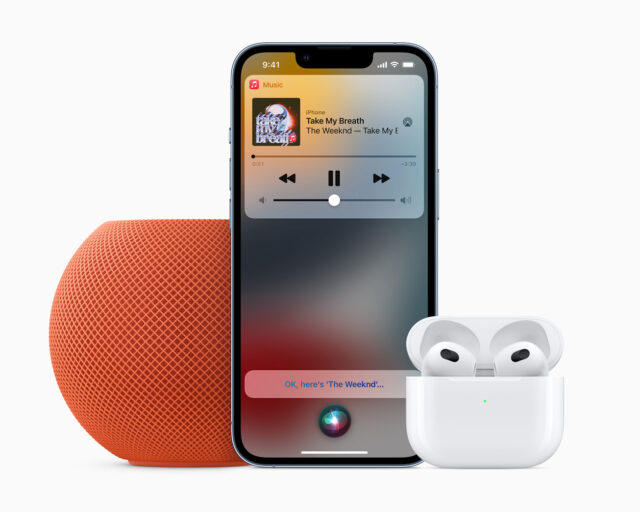 Apple Music Voice Plan subscribers can tap into Apple Music’s full library of 90 million songs, along with tens of thousands of Apple playlists that include hundreds of themed playlists the company created for this new Apple Music tier. You can also ask Siri to fire up Apple’s 24-hour Apple One, Apple Music Classics, and Apple Music Country stations.

If you’ve been an infrequent Siri user, like me, or if you simply don’t have a lot of artist and album names stored in your head, getting the hang of building verbal music search queries may take a little while.

Apple tries to assist you with a “Just Ask Siri” tutorial in the iOS version of the Music app (such handholding is more limited in the Mac version). Or you can say, “Hey Siri, play the voice tutorial,” and some dude called Zane Lowe (host of Apple One) will give a spoken tour. I also found guidance in an Apple support article. 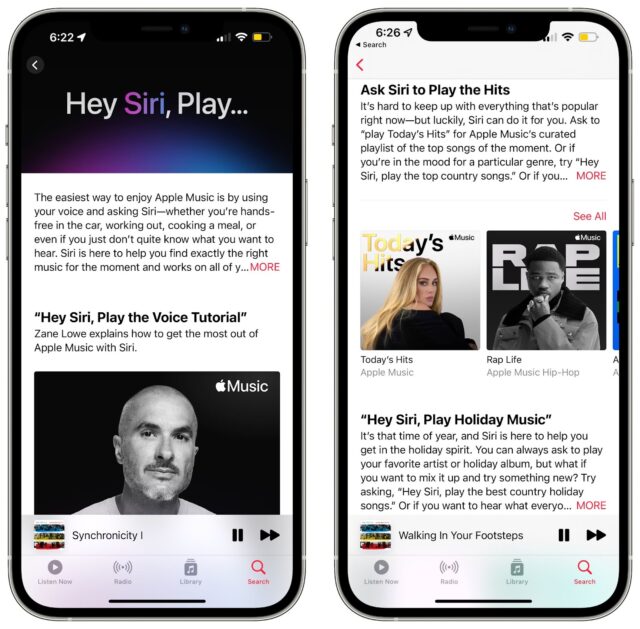 As you would expect with a bargain-priced, voice-focused tier of Apple Music, there are numerous limitations. Among the actions that you can’t trigger with voice commands are:

It’s clear that Apple is targeting HomePod users with the Apple Music Voice Plan. If you primarily listen to music on a HomePod, you’re already mostly limited to Siri. You can, of course, start playing something in the Music app on another Apple device and send it to the HomePod. That doesn’t change, but if you do that a lot, you might be frustrated by the limitations that hamper full use of the Music app.

I have two HomePod minis, and I haven’t felt hampered by the limitations of the Apple Music Voice Plan. I’d suggest that this less expensive Apple Music tier is primarily aimed at increasing the appeal of the HomePod mini. It isn’t super pricey at $99, but that’s still three to four times as much as the Amazon and Google equivalents. The Apple Music Voice Plan does cost less than Amazon Music Unlimited ($7.99 per month for Amazon Prime members, $9.99 per month for others) and Google’s YouTube Music Premium ($9.99 per month), but keep in mind those Amazon and Google plans compete more directly with Apple Music’s full individual plan.

So what about using the Apple Music Voice Plan on other Apple devices?

The Apple Music Voice Plan’s limitations are apparent in the iPhone and iPad versions of the Music app, which has been stripped of features while remaining surprisingly useful.

You can type in searches, but attempting to play a result will give you just a preview of 15 to 30 seconds. Instead, you have to look at the search results and issue a command to Siri to play the full tracks.

Once you start playing music, you’ll see a familiar Now Playing window with album artwork and background colors, plus the controls to pause, move backward and forward within a track, skip to the next track, share it with friends, transfer music to different AirPlay devices in your home, and view the Up Next screen. 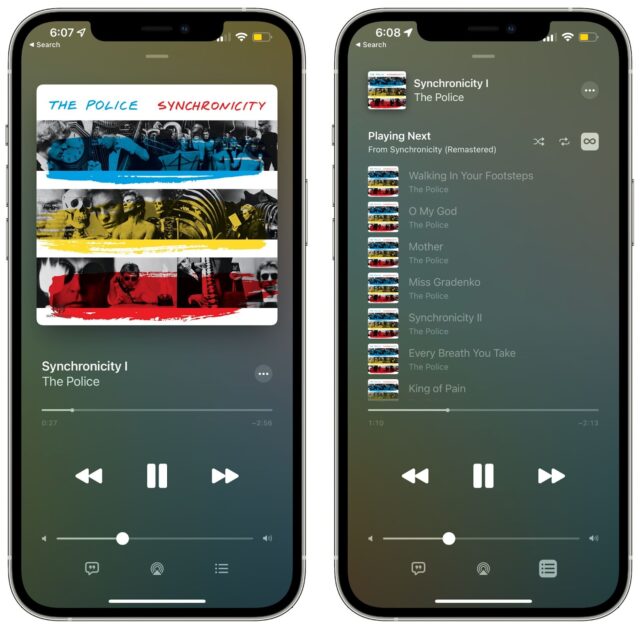 If you ask Siri to play a song, it will subsequently feed you a stream of similar content (assuming you have Apple Music’s Autoplay feature enabled—tap the infinity symbol next to Playing Next). You can see on the Up Next screen what songs are up next in the queue, but you can’t change their order or switch to playing one of the upcoming tunes.

There is a workaround: Keep tapping the forward button or say “next” to Siri to cycle through the Up Next list. Such unlimited song skipping is comparable to that available in Pandora and other music apps. So, when the Apple Music Voice Plan is described as being limited to Siri interactions, that’s not entirely accurate.

The iOS Music app retains its familiar toolbar, though not everything works as usual:

Your experience in the Mac’s Music app will differ from the iOS version to a large extent—and not in a good way. Siri requests work as expected, but the Mac version throws up obstacles I didn’t encounter on other Apple devices. 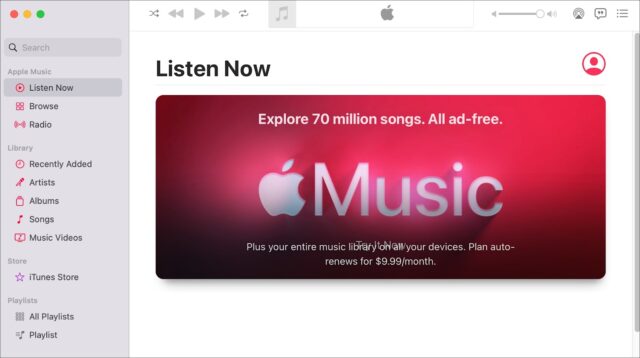 Happily, my Music library was fully operational with ripped and purchased tracks—there’s no requirement that you use your voice to access content you own.

Regardless, if you plan to use Apple Music on your Mac, I recommend skipping the Voice Plan and going for the full tier.

I had the most fun with Apple Music on the Apple TV I use when working out on my stationary bicycle—I had a blast queuing up workout-type tunes using the Siri Remote as I used the Zwift cycling simulator on my iPhone (see “Zwift Transforms Stationary Bicycling into a Shared Virtual Experience,” 1 July 2020).

Navigation on the Apple TV closely mirrors that on the iPhone with Siri search suggestions, a list of recently played tunes that are clickable, and endless streaming with a song-skipping option. Since it’s difficult to type on the Apple TV anyway, the Apple Music Voice Plan limitations didn’t hamper basic usage at all.

Siri has historically been an imperfect voice assistant with accuracy and versatility that has been lacking compared to Amazon’s Alexa and Google Assistant. However, Siri has come a long way. The Apple Music Voice Plan wouldn’t be a viable option otherwise.

But I saw Siri misfires galore. At one point, Siri drew a blank on Pete Seeger, and I had to keep asking for the folk singer to jog its memory. When I asked Siri to “Play Synchronicity,” Siri oddly pointed me to the Tubi video app and the 2015 sci-fi film instead of offering the well-known 1980s album by the Police, even though the Music app had, just minutes earlier, suggested precisely that album as a voice-search suggestion.

On the plus side, Siri did a surprisingly accurate job of understanding my Spanish-language requests for Latin American content. That’s good since the Apple Music Voice Plan is rolling out in 16 other countries, including Mexico and Spain. But when reading back the artist, track, and album names prior to playing them, Siri’s Spanish mispronunciations were often hilarious. So was the time I asked for Ruben Bládes’s album “La Rosa de los Vientos,” and Siri understood that to mean “The Rules of the Lesbians.”

Some of the errors may simply be human mistakes when tagging music. When I requested reggaeton music from my native Puerto Rico—a reasonable query since the gritty genre largely emerged from San Juan housing projects not far from where I grew up—Siri queued up El Gran Combo, a classic salsa orchestra bearing little relation to Daddy Yankee and Bad Bunny.

And how does Siri sort out which device will respond to a music query in a room filled with a Mac, iPhone, iPad, HomePod, and Apple Watch? Generally well, but not perfectly. Several times, two Apple devices in my office initiated playback, each with a different song, at the same time.

I could go on, but I would simply advise you to expect occasional Siri turbulence if you decide to take the Apple Music Voice Plan for a test flight.

Who Is the Apple Music Voice Plan For?

The Apple Music Voice Plan isn’t for everyone. Consider the Two Julios.

The 1980s version of yours truly was passionate about hearing the latest bands and meticulous about curating collections of LPs, cassettes, and, eventually, CDs. This fixation continued into the 2000s with the emergence of music-player applications—iTunes, notably—within which I would obsessively organize my digital music library.

Today I’m a more casual music listener. I focus more on books and current events than music trends, and I can’t remember the last time I paid for an album, physical or digital. The Pandora music service fits my needs because I feed it a few parameters—1980s New Wave, say—and then lean back and enjoy the stream.

1980s Julio would rail against the limitations of the Apple Music Voice Plan. Voice-only access to the immense Apple Music library is too limiting for those who want precise and exhaustive access to the latest music releases and industry developments.

For 2020s Julio, the Apple Music Voice Plan is a better fit. I don’t have to know much about the music—unless a particular artist or genre piques my interest—but can just make Siri requests to conjure up a desired musical atmosphere.

Where do you fall on the Julio spectrum? Those who are deeply involved with music and frequently play it from the Mac should avoid the Apple Music Voice Plan—you will find it tremendously frustrating.

On the other hand, if you primarily play music from a HomePod, Apple TV, iPhone, or iPad, and you’re generally happy with recommendations, whether human-curated or AI-driven, you have little to lose by diving in for a week to see if the Apple Music Voice Plan limitations bother you or make no difference in how you interact with music.